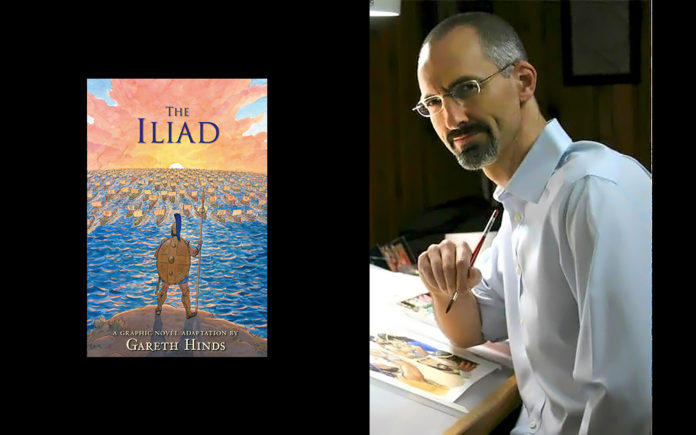 R&B singer Edwin Starr asks the question “War. What is it good for?,” then belts out “Absolutely nothing” along with other reasons why war is bad.  In the graphic novel adapted by Gareth Hinds, The Iliad (Candlewick Press, 272 pages), justification for a pointless war continues to resonate 3,000 years later through dialogue and watercolor illustrations.

For many, Homer’s epic poem is a confusing mash-up of mythology, history, gods and men, who fight over the possession of beautiful women.

In this modern iteration, artist and author Hinds breaks down the story into comic book panels creating a lively and gruesome retelling of the events that unfolded during the Trojan War.

The story begins almost a decade into the war between the Achaeans (Greeks) and the Trojans.  The conflict centers around a feud between super warrior Achilles and King Agamemnon, the leader of the Greek forces after Helen (wife of Menelaus) is spirited away by Paris, prince of Troy (who was manipulated by the gods.)  Thousands of men fight and die until a final one-on-one battle is fought between Trojan super warrior, Hector and Achilles.

The Iliad is considered one of the most significant works of Western literature.  Hinds does a beautiful job retelling the story in both words and pictures.  He reduces Homer’s 22 books, originally over 700 pages, to a manageable and coherent narrative.  His illustrations make it easy to follow the myriad characters.  The gods are depicted in soft singular colors, while the humans are painted in bolder detail.

At face value, The Iliad glorifies war and makes heroes of men who willingly fight to the death for honor and glory.  But, Hinds allows the debate about war to enter the text and drawings revealing the horrors and tragedies that war brings to human kind.

All sides ask the most important question:  What are we fighting for?  However, the answer is unfortunately diluted by egomaniacal, jealous and arrogant men who can only see their selfish needs met at the expense of thousands of lives.

The final book (or chapter) is the most potent where after Achilles defeats Hector, and degrades and humiliates his mightiest enemy in front of everybody, Achillies looks like more of an asshole than a hero.  So, when Hector’s father, King Priam, sneaks into Achillies tent to humbly request his son’s body, Achilles is moved by the humanity of a father’s sorrow and loss.  Achillies redeems himself and returns Hector with the honor a heroic warrior deserves.

Another intriguing debate in The Iliad is between the gods about mortality. They question whether they should intervene directly and save their favorite humans from death.  They grieve for mortals who are born to die.

Hinds includes an index of characters (which makes it easy to identify the important players in the story) as well as extensive notes and a map all illustrated in the same watercolor pallet.

It is amazing that after 3,000 years we are still telling this story.  The Trojan War was fought in the late Bronze Age — twelfth century B.C.E.  Homer’s poem was memorized and recited.  The Iliad was like a bible for the time.

Makes me wonder.   How has this literature shaped our Western culture over the millennia?  The women are seen as property only cherished for their beauty.  All sides worship the same gods asking for the same favors on their behalf.  The few in power use false pride, facts and patriotism to recruit the many who willingly fight their battles.

Reading The Iliad today, it is easy to see our own war-like culture and the spins created to justify our fights.   The arrogance, hubris and misogyny of those in power remain the same.