A slew of watchable, fun female centric films are fighting for attention on the big screen and on demand for the home theater.  Here are a few current titles for consideration that offer a diversion if not full satisfaction. 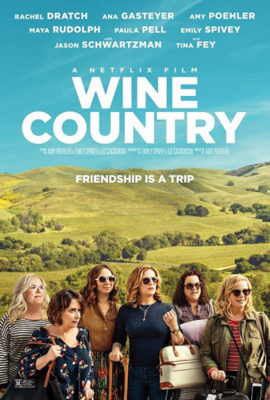 In honor of Rebecca (Rachel Dratch)’s 50th birthday, Abby (Amy Poehler) plans a wine country getaway with their best, longtime friends. Workaholic Catherine (Ana Gasteyer), post-op Val (Paula Pell), homebody Jenny (Emily Spivey), and weary mom Naomi (Maya Rudolph) are all sold on the opportunity to have fun and reconnect. But as the alcohol flows, real world uncertainties intrude on the gossip, and the women question their relationships and futures.

If you’re a woman of a certain age, you will appreciate and likely relate to these friends who head to the Napa Valley for what they hope will be a relaxing getaway.  Who wouldn’t love to have friends who are as accepting as they are unfiltered?The bond these friends have may be perfect, but it’s not easy to cram everything you want to say into an hour and half movie, although the 80’s references shine.When the itinerary gets busier and busier and the outing becomes a nightmare, the women struggle to keep up with their frantic host (Poehler), while at the same time sorting out issues of work, health and love. The performances are what elevate this otherwise rather disappointing movie to something tolerable if not memorable.  The title is a labored pun (whine country?) that pretty much says all you need to know. 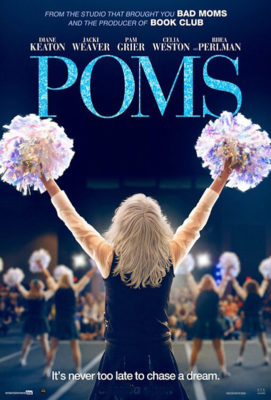 Can aging and mortality be better endured if you gather enough friends and surrender enough dignity?  That’s the big question posed here that underscores all the drinking, bonding and bickering

Martha (Diane Keaton) is an introvert who joins a retirement community that has shuffleboard, golf, bowling and other activities.  Hoping to be left alone, she meets Sheryl, a fun-loving neighbor.  After coming out of her shell, Martha and her new friend decide to create a cheerleading squad with fellow residents.  The two women hold auditions and press on with their cheerleading dreams even though the odds are stacked against them.  Not sure what the takeaway is, but as someone said, the best way to live your dreams is to wake up.

The great cast, besides Keaton, includes Jacki Weaver, Pam Grier and Rhea Perlman.  The charm of the cast almost makes up for the disappointingly predictable and preposterous screenplay.

Dark humor prevails but never gets dark enough in this story of an unlikely friendship between two women (Christina Applegate and Linda Cardellini) with diametrically opposite personalities who meet in a grief support group.

Jen (Applegate) is a Cynical Laguna Beach real estate agent and widow trying to solve her husband’s hit-and-run murder.  Judy (Cardellini) is an optimistic free spirit who’s recently suffered her own tragic loss  — a break up with her man.

As the two women bond over bottles of wine, Entenmann’s cookies and a shared affinity for the old TV show “The Facts of Life,” Judy tries to shield Jen from a shocking secret that could destroy her life as she knows it.  Streaming now on NETFIX. 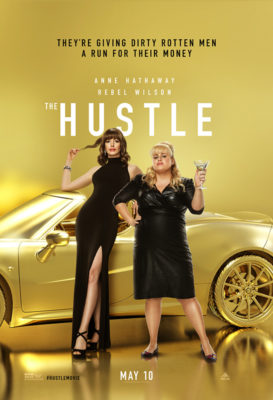 This gender twist remake (1988’s “Dirty Rotten Scoundrels”) of a remake (1964’s “Bedtime Story”) stars Rebel Wilson and Anne Hathaway as a pair of rival con artists with different styles who team up in Beaumont-sur-Mer, a picturesque seaside villa in the south of France.

Director Chris Addison’s calculated caper has Hathaway’s Josephine Chesterfield, a glamorous Brit with a breathy voice, and Wilson’s Penny Rust as a free spirited Aussie as masters of their deceptive crafts defrauding gullible and shockingly naïve men.  The con artists justify their work by specifically fleecing men who have wronged women.

Wilson’s Rust relies more on the physical while Hathaway’s Chesterfield uses her wits and feminine wiles.  The two actors have a winning chemistry despite the derivative narrative.  The movie shifted into high gear when they join forces to swindle Alex Sharp’s tech billionaire.  Fun but lightweight.