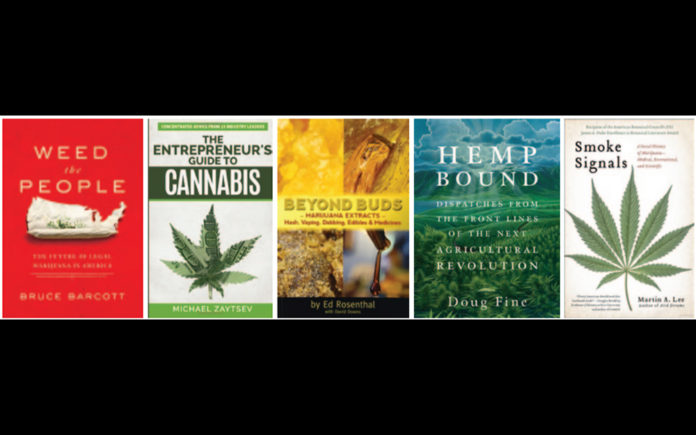 As the cannabis industry expands, it is hard to get a handle on the blossoming nature of the business.  There is so much information on marijuana’s healing and psychoactive affects, but what about the related businesses and cannabis commerce?  Living in California, it’s time to do the best we can to better understand the mainstream uses of cannabis and how it will play out in society both fiscally and socially.

Weed the People: The Future of Legal Marijuana in America by Bruce Barcott

The author examines the magnitude of change in America’s relationship to marijuana, which can no longer be measured in only economic or social terms.

There are deeper shifts happening:  Cultural realignments, social and financial adjustments. The place of marijuana in our lives is being rethought, reconsidered, and recalibrated.

The Entrepreneur’s Guide to Cannabis: Concentrated Advice From 25 Industry Leaders by Michael Zaytsev

Legal Cannabis represents a $50 billion a year industry and is in its infancy! There is still time to jump into the “Green Rush.”  Author Zaytsev interviews the most successful cannabis pioneers and ganjapreneurs about investing or starting a cannabis business.

This is a handbook to the future of marijuana. Technology has allowed for a cannabis revolution that’s generated powerful medicines and products containing almost zero carcinogens and little smoke.

The book is a primer on making tinctures, topicals, edibles, and other extracts from cannabis leaves, trim, and bud bits, and it goes on to explore and simplify the more exotic and trendy marijuana-infused products.

Hemp Bound: Dispatches From the Front Lines of the Next Agricultural Revolution by Doug Fine

The author reveals the significant return of hemp.  Its fibers are among the planet’s strongest, its seed oil the most nutritious, and its potential as an energy source vast and untapped.

For nearly a century, it’s been illegal to grow industrial cannabis in the United States–even though Betsy Ross wove the nation’s first flag out of hemp fabric, Thomas Jefferson composed the Declaration of Independence on it, and colonists could pay their taxes with it.  One of humanity’s longest-utilized plants is about to be reincorporated into the American economy.

Smoke Signals: A Social History of Marijuana – Medical, Recreational and Scientific by Martin A. Lee

This book tells the great American marijuana story, and the dramatic social exploration of a plant that sits at the nexus of political, legal, medical, and scientific discourse.

From its ancient origins, its cutting-edge therapeutic benefits, and its role in a culture war, marijuana has evolved beyond its own illicit subculture into a dynamic, multibillion-dollar industry.

Cannabis is slowly but surely becoming a mainstream industry that undoubtedly will have significant fiscal and social impact within our communities.  These books can give us a greater understanding of the nature of the plant, its related businesses and legal ramifications.