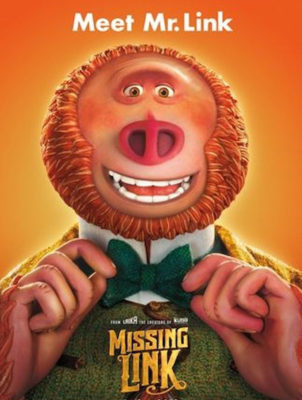 He’s 8 feet tall, covered in fur, and weighs in at 630 lbs.  But don’t let that frighten or fool you.  He’s a sweet, funny and frankly adorable living legend tired of his lonely life in the Pacific Northwest.

Dubbed “Mr. Link” by intrepid English explorer Sir Lionel Frost (Hugh Jackman) who guides him on a journey to find his long-lost relatives.

The story has Sir Frost trying to find respect from his snooty British “Optimates’ Club by taking off to discover the elusive and unseen Bigfoot/ Sasquatch/Yeti (Zach Galifianakis) who agrees to be “caught” and seen, in return for going to Shangri-La in the Himalayas, where he thinks he might connect be with his long-lost kinfolks.

Along with fellow adventurer Adelina Fortnight (Theresa Saldana), the trio of explorers encounter danger and more than their fair share of perils as they trek to the far reaches of the world in order to help their new friend. Through it all, the three learn that you can find “family” in places you least expect.

As with other Laika films (Coraline, ParaNorman, The Boxtrolls and Kubo and the Two Strings), you’ll experience incredible stop-motion animation, and perhaps be both enchanted and maybe even surprised by the big heart beneath the superb techno-artistry on display.

The story has Sir Frost (Jackman), who is determined to find respect from his snooty British club by taking off to discover the elusive and unseen Bigfoot/ Sasquatch/Yeti (Zak Galifianakis) who agrees to be “caught” and seen, in return for going to Shangri-La in the Himalayas, where he thinks he might connect be with his long-lost kinfolks.

The character designs are fine, but I thought there was a lot of “Big Bird” and “Teletubbies” DNA in Link’s physicality that was, for me, a bit off-putting.

The craftsmanship and eye-popping production design are mind-boggling.  There were 106,000 faces, 95 stages and 110 sets!

NEW 4K FOR THE HOME THEATER: 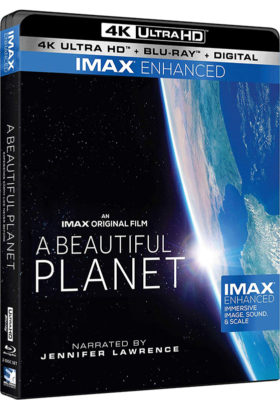 Made in cooperation with the National Aeronautics and Space Administration (NASA), the film features stunning never-before seen footage of earth and the effects humanity has had on it over time, captured by the astronauts using a state of the art hi-def Imax camera aboard the International Space Station (ISS).

For me, the most memorable images are of the earth blazing at night with the electric intensity of human expansion – a direct visualization of our changing world.  It is shocking to see North Korea in near total darkness compared to well-illuminated South Korea.

This magnificent film reminds that it is within our power to protect our planet.  As we continue to explore and gain knowledge of our galaxy, maybe we can develop a deeper connection to each other and the place we all call home.

The near perfect video with its uncompromising audio make this one of the year’s best UHD releases.  It’s the best release Mill Creek has put on the market.

JOURNEY TO THE SOUTH PACIFIC 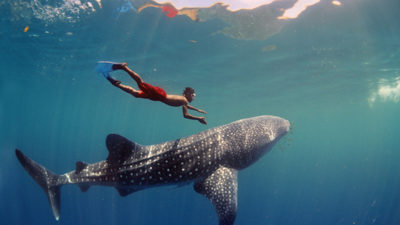 Cate Blanchett, narrates an armchair adventure that takes moviegoers to the lush tropical islands of remote West Papua, where life flourishes above and below the sea.

We meet and join Jawi, a young island boy who he takes us on a wondrous journey of discovery in this magical place where he and we encounter whale sharks, sea turtles, manta rays and other iconic creatures in this exotic locale that’s home to literally thousands of species of sea life, the most diverse marine ecosystem on earth.

Don’t miss this exquisitely photographed and uplifting celebration of our fragile ocean planet that reminds of the importance — or rather the necessity — of finding a way to live in balance with it.  A perfect companion piece to Our Beautiful Planet.  4K UHD.  MacGillivray/Freeman Films.  Mill Creek Entertainment.