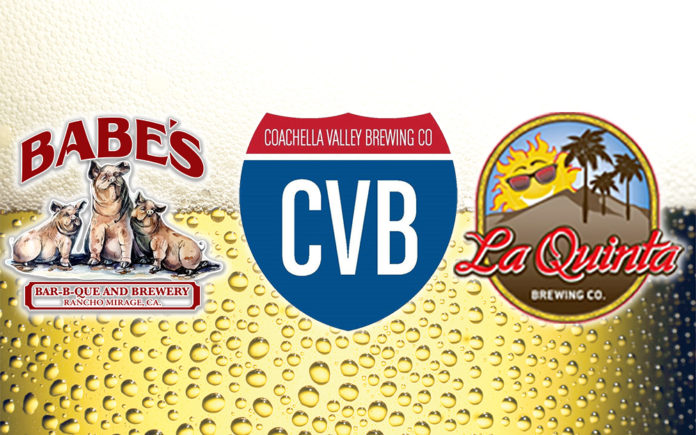 Like most communities, the craft beer scene is filled with chicken-littles who cannot stop themselves from letting everyone else know that the sky is falling. With every brewery closure, regardless of rhyme or reason, these keyboard-ready alarmists do nothing to fight their insatiable urges to share stories of AB InBev buyouts and nano brewery shut downs. “The bubble has finally burst,” they cluck out the side of their mouths while shaking their heads at those of us who are still optimistic that craft beer has a bright and positive future.

In the short span of a decade, the Palm Springs area has gone from a craft beer wasteland to a blooming scene that offers breweries, taprooms, brewpubs, and retail stores with decent selections of craft from across the country. Here’s my unofficial guide to the Coachella Valley’s state of beer in 2019.

Babe’s Brewhouse: The Coachella Valley’s oldest operating brewhouse (a small 10 bbl brewery located inside of the BBQ restaurant), Babe’s has been in operation since 2003 and has a dedicated fan base who enjoys their product. With four core beers and one rotating brew that changes with the season, Babe’s has a small but solid selection, highlighted by their American Schwarzbier, “Blackfin Lager”.

Babe’s also carries a nice selection of guest taps that emphasizes and showcases west coast breweries like Stone, Firestone Walker, and Santa Monica Brewing Co among others, so there is in fact a decent selection of beer to choose from when you’re there. Babe’s also offers a selection of bottled beer that is hard to find anywhere else and is recommended for fans of BBQ as well as craft.

Coachella Valley Brewing Company: Opening its doors in August of 2013, CVB made a huge impact on the desert’s craft beer scene, as their wide and varied selection of beers brought an unconventional twist. “Desert Swarm” has been one of their flagship drinks since day one, and blends honey, coriander, and local kumquat citrus fruit into a 7% double witbier.

CVB has a solid selection of flagship beers, but has become known for their adventurous, barrel aged sour ales. Embracing the haze craze whole heartedly, you’ll find several variants of hazy IPA on tap, each featuring a different hop profile, and some even with fruit. CVB remains the most eclectic of the desert’s breweries.

La Quinta Brewing Company: LQB has earned an unprecedented reputation as the desert’s #1 brewery by polishing their recipes into a clean, aggressive, west coast style that would make even the famed San Diego brewing scene proud. IPA driven and hop fueled, La Quinta Brewery might be known for their pale ales, but their Koffi Porter is what’s the decided favorite of fans and critics alike. Found in over 175 bars and restaurants in the desert area, LQB’s beers are ubiquitous for a reason; their exceptional quality.

Toscano’s/BrewQuinta: Located in the former Lamp Post Pizza/Backstreet Brewery La Quinta location, Toscano’s and BrewQuinta carry on the pairing of pizza and beer that was started by their predecessors. BrewQuinta is the offshoot of Brewcaipa, a Yucaipa based craft brewery, and carries many of the beers on tap at the brewery. With plans to rebuild the brewery that was originally a part of the building, this site looks to join Desert Brewing Company as two new additions to the Coachella Valley beer scene in 2019.

It’s worth noting that I’m the brewer for Brewcaipa and BrewQuinta, and while It would be unbecoming to praise my own beer, I would encourage everyone to check Toscano’s and BrewQuinta and taste for yourself if I’m contributing to the desert’s burgeoning beer culture.

La Quinta Brewing Company: With taproom locations in Palm Spring and Old Town La Quinta as well as the original Palm Desert location, LQB has undoubtably risen to become the face of the Coachella Valley beer scene. The Old Town taproom frequently hosts tap takeovers and has become a local’s hotspot in town.

With each brewery bringing a decidedly different approach and style to craft beer making, the desert’s small but growing scene is proof positive that the days of being a craft beer wasteland are permanently behind us.