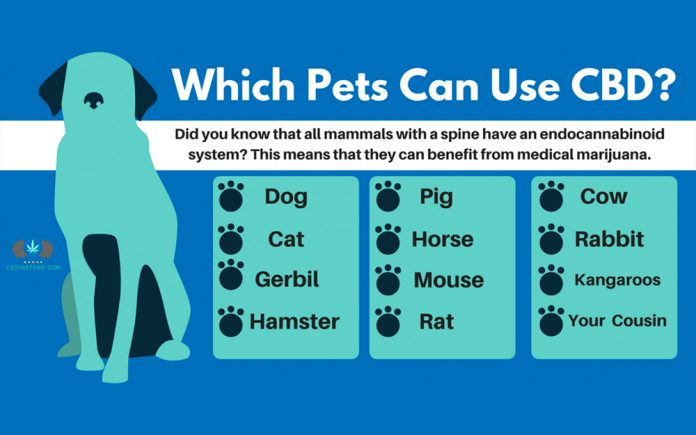 Four years ago, the landscape for veterinarians educating or recommending cannabis for pets was abysmally absent. State laws legalizing cannabis allowed Medical Doctors, Doctor of Osteopathic Medicine and Doctor of Podiatric Medicine to verify that a patient has a serious medical condition that would benefit from the use of marijuana. But it excluded a Doctor of Veterinarian Medicine. Just the mention of marijuana for pets sent a veterinarian to shiver in silence and run in the other direction. That changed in September of 2018 when CA became the first state to protect veterinary license-holders from disciplinary action solely for discussing the therapeutic use of cannabis in animals. With 10,000 research studies on cannabis mostly with human use, veterinarians sent a Paul Revere signal for research on dogs, cats, and the endocannabinoid system (ECS) in animals.

In last week’s article I discussed the ECS, discovered in 1992 for all living Animalia except insects. The animal and human ECS are similar in response to cellular processes. The differences are in the distribution of the receptors. CB1 receptors in the hind brain structures of canines create a unique neurological action “static ataxia” when stimulated by delta9- Tetrahydrocannabinoid (THC). While not fatal it is scary for the dog and owner and often sends the animal to the emergency room.

In a study of seven representative species of invertebrates, McPartland 2006, evaluated seven species of invertebrates by a tritiated ligand binding assay and identified cannabinoid receptors in non-mammalian species including birds, reptiles, and fish. Stephen Cital a Registered Veterinarian Technician (RVT), who researches, writes, and lectures on how to treat all pets with a broad spectrum hemp that contains all the cannabinoids, enzymes, and terpenes in the plant devoid of THC.

A researcher from Colorado State University recently reported finding 89 percent of epileptic dogs had fewer seizures when taking the chicken-flavored CBD oil, as compared to about 20 percent that were on a placebo. Another project, conducted at Cornell University,  appeared to show that dogs treated with CBD oil have a clinically significant reduction in pain and an increase in activity .

Many pet owners do not take seriously the complications of using cannabis with THC. Pet cannabis products in the dispensaries can be used in concentrations of CBD:THC 30:1 or CBD:THC of 20:1 for intense pain or cancer. Severe pet conditions like cancer need to have medical personnel involved. There are many hemp products that would be more advisable due to their low percentage of less than 0.3% THC or the hemp will be illegal. If, a batch of hemp tested by regulators contains more than 0.3% THC the whole batch will be disposed of.

Pets arrive unconscious at a veterinarian’s office with owners who are reluctant to fess up when questioned about cannabis use. The most frequents conditions discussed were pain management, anxiety, seizures, and storm/fireworks phobias.

Medical cannabis for pets usually comes as a liquid oil or as treats. Liquids are preferable because the dosing can be accurately controlled and because CBD may be better absorbed through the tissues of the mouth rather than through the digestive tract.

Vaporized or smoked cannabis should NEVER be used with pets. This can damage their lungs and can lead to accidental overdose. Another renown veterinarian, Robert Silver, has researched the ECS of pets. Silver recommends a dosage of hemp oil supplementation (based on body weight of feline and canine candidates) to be followed. His recommendation is a range of hemp based on weight: 0.1mg/kg to 0.5mg/kg for anxiety.

Similarly, edibles for humans should not be given to your pet as they are impossible to dose accurately and they may contain ingredients (such as raisins, chocolate, etc.) that are toxic to animals. If you put the dropper in the pet’s mouth, remember to wipe the dropper off or you will get mold or a variety of microorganisms contaminating the bottle. For more information go to https://www.projectcbd.org/medicine/cbd-cannabis-pets-pain