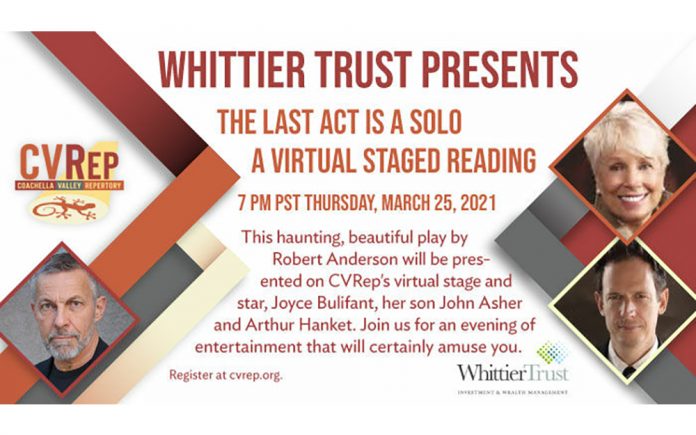 Coachella Valley Repertory’s Theatre Thursdays continues their online staged readings with The Last Act Is a Solo on Thursday, March 25, 2021 at 7:00 pm (Pacific). An amazing cast has been assembled to bring to life this brilliant one-act play by Robert Anderson, one of America’s foremost playwrights. To join this presentation, visit cvrep.org and register.

The Last Act Is a Solo follows Laura Cunningham, an actress who was once a star but now lives amid costumes and props, reminders of her former success. Though she grows increasingly frail, she refuses to retire, resisting her nephew’s attempts to move her to the country where she can be cared for. In fact, she has an interview that very afternoon with a director. This staged reading walks the line between realism and sentimentality, taking viewers on an emotional journey and moving any audience with its poignancy.

Returning to the virtual stage to direct this performance is CVRep Founding Artistic Director, Ron Celona, who has produced, directed and choreographed over 70 productions. He began his career as an actor, dancer and singer in Philadelphia, working as an actor in New York and Philly prior to moving to California in 1984. After years of performing on stage and in film and television, he became the founder, Producing Artistic Director, and producer of the American Musical Theatre Repertory in Los Angeles and then went on to found CVRep here in the Valley. 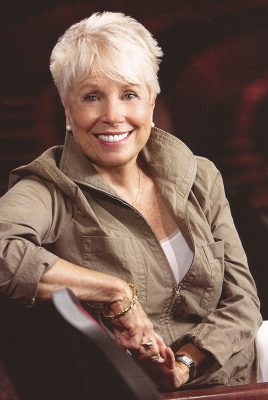 Also returning to the virtual stage is storied actress Joyce Bulifant, a Luminary Guest Artist at CVRep who will star as Laura Cunningham. Bulifant’s illustrious career includes roles in The Mary Tyler Moore Show, The Happiest Millionaire, and Airplane! Joining her will be her son John Asher (Weird Science, The Bride of Frankenstein) and Arthur Hanket (The Goat, Or Who is Sylvia?)

Joyce Boulifant was born on December 16, 1937 in Newport News, Virginia, USA as Joyce Collins Boulifant. She is an actress, known for Airplane! (1980), Dirty Love (2005) and American Playhouse (1980). Joyce was originally cast as Carol Brady on The Brady Bunch (1969) but was dropped. She played the mother of her real-life son John Asher in Weird Science (1994). She was previously married to Roger Perry, Glade Bruce Hansen, William Asher, Edward Mallory and James MacArthur. “My greatest success, I feel, has been the ability to make people laugh, even at my own expense and using that gift to help raise funds for children’s charities.” 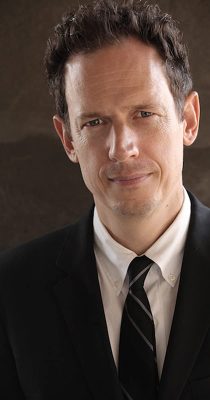 John is an award-winning writer/director who spent his early life breaking his dad’s video cameras trying to get an epic shot. He directed his first film at age 25-Kounterfeit (1996), starring Oscar winner Hillary Swank. He followed that with Chick Flick (1998), then the Miramax film, Diamonds (1999), starring Kirk Douglas and Dan Aykroyd. All before his 30th birthday. In 2005 his film Dirty Love premiered at Sundance. Branching out into TV, John directed the Showtime series, Going to California (2001), and the hit CW series, One Tree Hill (2006), as well as several LIVE comedy specials including Margaret Cho: PsyCHO (Showtime), Sebastian Maniscalco: Aren’t You Embarrassed (Showtime), and Ralphie May: Unruly (Netflix). In 2017, John wrote and directed TOOKEN, the over the top spoof lampooning the Taken franchise, starring Margaret Cho. In 2019 he directed the family comedy I Hate Kids. 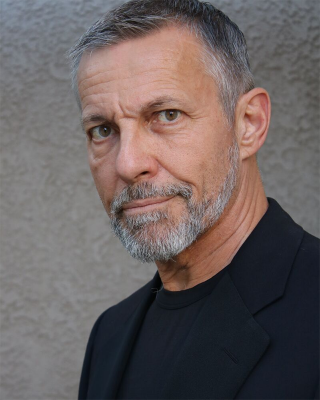