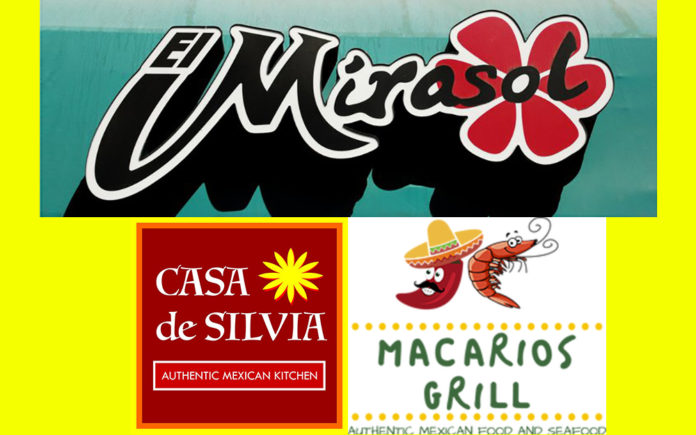 Dark, rich and velvety, nothing can compare to this Mexican cuisine king of sauces, the royal Mole.

There’s a rule of thumb that I usually follow when dinning out. I believe that if I can make it at home (because I do love to cook), I won’t order it out. I would rather indulge in menu items that are challenging, and highlight the chosen restaurants uniqueness and expertise. One such item is Mole. It is a sauce that has a mile long list of ingredients, and immensely time consuming. I mean, I could try my hand at it, but I’d much rather leave it to the pro’s, and just be on hand to joyfully eat it….every drop of it. 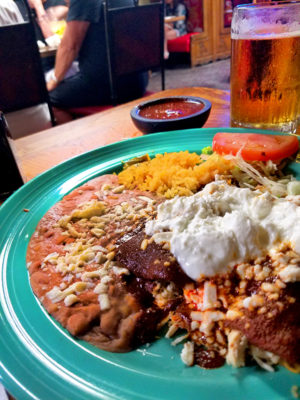 Mole has a long history and has been around since the 17th century. Its origins are traced to the Puebla and Oaxaca regions of Mexico. Mole (molli) comes from the Nahuatl word for sauce. As I mentioned, the sauce has many ingredients that assist in making it so amazingly delicious. There are variations, but traditional Mole incorporates different chilies (usually ancho and chipotle) tomatoes, tomatillos, nuts, raisins, spices such as cumin and cinnamon, onions, garlic, chicken broth and one of the most distinctive ingredients to the sauce, chocolate, plus about another dozen elements. Yeah, it’s a lot!

Mole can be served as an accompaniment to different food items such as chicken, burritos, eggs, enchiladas, tamales, and as I see it, just about anything. Over the years, I have tried Mole at different Coachella Valley Mexican restaurants, and as I’ve said before in different reviews, I sometimes use it as a scale to determine the restaurants quality. Here are some of the stand out Mole’s that I have tried and absolutely loved, hopefully you will too.

El Mirasol- I remember first going to this long established Palm Springs Mexican favorite over 20 years ago and falling in love with it. My dear friend Steve Johns took me there, and I’ve never stopped going since. Back then I would order the Spinach Enchiladas (which I still order now). But desiring to try something new, I later tried their Pollo Mole Poblano, and that was that. It was the first time I had tried the Mole, and from then on I was addicted. Rich, deep and luscious with a hint of heat, the sauce threw me for a loop! After that, I went back to my Spinach Enchiladas, but always with a side of Mole. www.elmirasolcocinamexicana.menutoeat.com.

Macarios Grill- When you ask someone who loves Mexican food, where to find the best in the Coachella Valley, Macarios will most likely come up as a recommendation. Located off of Indio Blvd, the once residential house sits confidently alone, as hungry diners flock to it on any given day. The interior offers a homey feel, and the service accentuates it with lots of smiles and genuine attention. There is usually live music provided by a talented guitarist that lends to the ambiance. I have come to enjoy certain menu items at Macarios. And although I keep meaning to try different selections such as their Huachinango, fresh whole snapper with their al mojo de ajo sauce (garlic and olive oil), I keep gravitating to my favorites there, like the Chiles Gueritos (yellow peppers stuffed with shrimp and octopus, topped with melted jack cheese), Camarones Galicia (bacon wrapped shrimp in a creamy chipotle sauce) and of course their Mole Enchiladas. The Mole Enchiladas are filled with chicken, smothered with Mole sauce and topped with fresh queso. I always ask for an extra side of Mole, because that’s how I roll, and I really just can’t get enough of it. The velvety sauce oozes with luxury, making each bite beckon another. I can’t wait to go back! www.macariosgrill.com

Casa de Silvia- This spot is a rising star on the Coachella Valley Mexican restaurant scene.  The little nook in Old Town Indio is family owned and operated, and they are known for their award winning tamales. But honestly all the food at Casa de Silvia’s is incredible, and I am not throwing that compliment around as hyperbole. The have off the chart Mole, which is one of the spiciest that I’ve tasted. But it works, as the dark lavish sauce commands attention, taking center stage on any plate. They serve it as part as a chicken tamale dish, the Del Sur, and also with chicken breast in the menu selection, Abuellas Mole. I had it as part of the Del Sur, and as a side (big surprise) to my Chile Verde, just so that I could dip my tortilla in it. Yes, it’s that good! Located at 82-720 Miles Ave, Indio 92201.

My quest for more outstanding Mole continues, and it’s a food adventure that I revel in. If you have yet to try Mole, I encourage you to do so. It is one of the most amazing and complex sauces out there in foodie land, with a heritage as rich as its flavor. Wholly Mole indeed!