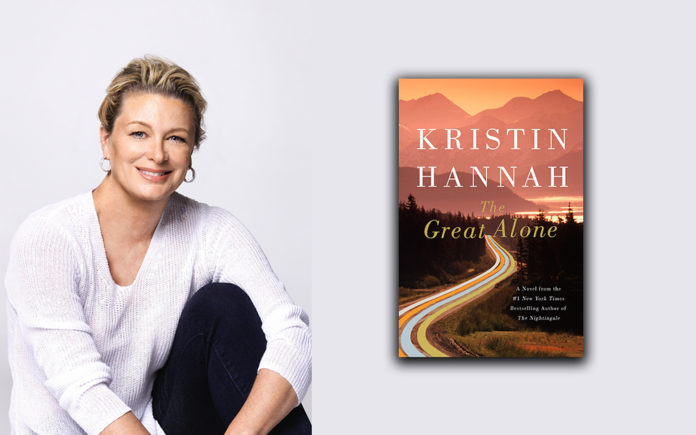 There is an allure to Alaska, the largest and most untamed state in the union.  It is a romantic notion to live off the land and survive the harsh winters.  In Kristin Hannah’s The Great Alone (St. Martin’s Press, 440 pages) a family comes to terms with the dangers of living a remote life.

The story begins in 1973.  Leni is 13 and her family has moved so many times she is friendless and considers herself an outsider.  Her father Ernt returned from Viet Nam a changed and volatile man who is restless and cannot hold a job.  His best buddy died in his arms during jungle combat.

When his buddy’s father gives his son’s Alaska cabin and land to Ernt, the family moves from Seattle, hoping for a better future.

Unprepared and with hardly any money, Leni and her folks make their way to Alaska at the beginning of summer and find the remote homestead in need of repair.  They clean and fix it up the best they can, but they still have no idea what’s to come.

But with the help of a few folks in the small isolated community, they soon find the support they need to make it work.

Leni’s father Ernt becomes close with his dead buddy’s father “Mad Earl,” a separatist and doomsday believer who has a compound nearby.  His influence quickly melds with Ernt’s government-hating beliefs, which further fuels his drinking and post traumatic stress disorder.

Leni attends school and meets Matthew with whom she not only becomes a friend, but his girlfriend.  Unfortunately for Leni, her father loathes Matthew’s father and forbids her to date him.

Alaska takes a toll on the family and Ernt goes back to his old ways, drinking and beating his wife.  Leni is confused by her folk’s relationship and doesn’t understand why her mother can’t or won’t leave her father.  Ernt’s anger and violence emotionally imprisons Leni and her mother as the winter closes in.

This is a coming of age story.  Leni and her mother become skilled outdoorswomen and survivalist.  The community becomes their extended family.

But, when it becomes evident to the community that Ernt is abusive and off his rocker, they intervene, finding him a job far away working on a pipeline.  Of course, Ernt loses his job, and the abuse and insanity gets worse.  Now he resents the community’s invasion into his family’s private lives.

The story reveals how difficult it was in the 1970s for women to report, get protection, or justice from spousal abusers.  Leni’s mother can’t get a credit card or earn equal pay for equal work, making it even more difficult for her to leave.

Surviving harsh winters, bears and wolves, was equally dangerous as surviving an abusive and crazed patriarch.

Author Hannah captures the cold and wildness of Alaska.  I felt like I visited Leni’s homestead.  She also reveals how quickly people can get sucked into insane loop thinking when they are isolated and have no dissenting voices.  This aspect of the story was as chilling as the harsh Alaskan winter.

I found that the “happy ending” was actually closely inline with the repeat pathology of a child growing up in an unstable and abusive household.   Leni, in more ways than one, follows in her mother’s footsteps — almost quite literally.

The title, The Great Alone, comes from a Robert Service poem and captured the intensity of Leni’s emotional state when she dare not share what was happening with her father behind closed doors and miles away from her closest neighbor.

I still dream of going to a remote place, homesteading the land and living closely with nature.  Building an independent life and finding a like-minded community where everyone is self-sufficient, generous and helpful sounds idyllic — as long as the humans are not insane and/or dangerous.