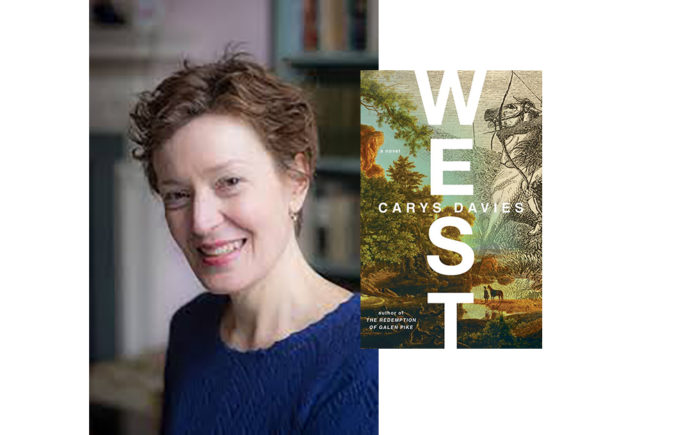 The American frontier continues to captivate the imagination of readers and adventure seekers. There is something still alluring and romantic about its natural beauty, imposing terrain, and indigenous peoples.  In Carys Davies’ West (Scribner, 153 pages), one man sets out to search the wild west for wild beasts.

The story takes place after Captain Lewis and Lieutenant Clark return from their exploration of the west.  Cy Bellman has followed the reports of their adventure and studied their maps.

When he reads about a discovery of giant animal bones and huge tusks he is mesmerized by the thought of the creature and decides he must find the beasts in their natural habitat.  Other than the remains, there is no evidence that the creatures still exist.  But in his mind, he imagines the giant elusive beasts roaming the west and he must see them for himself.

Obsessed with the magnificent creature, he leaves behind his young daughter Bess in the care of his taciturn sister.

Bellman, a widower, takes some of the personal belongings of his dead wife – ribbons, beads, buttons, knitting needles, etc. – to trade with the native tribes.  He sets out on his journey with a stovepipe hat, a thick brown dress coat and a few weapons.  He is totally unprepared.

Meanwhile, his daughter Bess must deal with her disparaging aunt and the mean gossip about her father.  “He is a fool” and no one believes Bellman will ever return.

Coming of age, Bess has several uncomfortable encounters with men.  Her aunt cannot protect her and she must fend for herself until her father comes home.  But will he return?

The premise of this story completely intrigued me.  I was sent back into a time when a newspaper article was the only source of disseminated information.  I could imagine how interesting it would be to follow the news about the Lewis and Clark expedition into uncharted territory.

Then Bellman reads a report about the uncovering of enormous bones, which was certainly extraordinary and exciting news from an unknown world.  Indeed, Bellman could not stop thinking about the mind-blowing, albeit limited, information.  Apparently, at the time, Woolley Mammoths were unknown?  But, scientists must have known about elephants?

Beyond Bellman’s intrigue with the “discovery,” the reader never really understands for sure what the remains are — Mammoth, a dinosaur, alien? – or why he was driven to seek answers about its existence.

The only answer we get is when the aunt speculates it is a “mid-life crisis” – only not expressed in those words.

Bellman’s adventure teams him up with a Native American teenager as they trek the west for two years.  The boy continues to work for Bellman being paid in beads and trinkets.

At the end of Bellman’s journey, he seems to have learned nothing.  Not even in a feverish state does he consider the beast as a metaphor for the pain that lingers from the loss of his wife, or a fear of not being successful.  He hardly regrets leaving his daughter.

West is more a novella than a novel.  At times, it felt like a children’s adventure story never delving into the deeper thoughts or pathology of an adult man obsessed with a creature that no longer exists.

Young Bess is never fully actualized in the story either.  I kept waiting for her to find the truth about her father’s giant beast.  I wanted her to prove to the community that these creatures did roam the west and could possibly still be out there.

As a western, I was disappointed that Bellman did not experience Native American culture in a more personal way.  He was not a naturalist or zoologist.  His adventure into the wild certainly would have put him in contact with elk, grizzlies and buffalo.  Nothing is said about those magnificent beasts freely roaming the landscape.

The author captured the small town feel of the community and the challenges of the era.  The differences between a growing Eastern town and the untamed wild west were clearly delineated as the story moved from character to character.

Perhaps the story is an allegory and has a grander theme that I missed.

I did like young Bess and I felt for her uncertain future.  Perhaps the author will write a sequel with Bess seeking the creature and find her own fate is a monster out west.