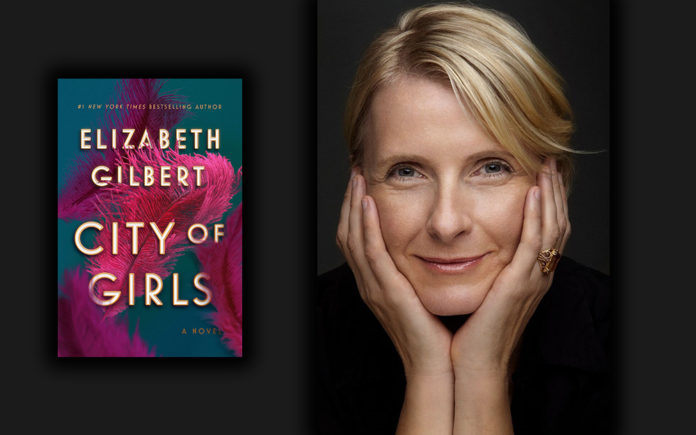 Experts have estimated that it will take 125 years before women earn equal pay.  It is disconcerting that equality for women – pay or otherwise — does not exist in this country, while male dominance persists.  In Elizabeth Gilberts’ City of Girls (Riverhead, 470 pages) women overcome the double standard and create a world where women rule.

The story is told by Vivian Morris who comes from a well-to-do family and after she’s kicked out of Vassar for lack of interest, her family sends her away to live with an aunt who was once an actress and now runs a small theater.

At 19 years old in 1940, Vivian discovers a whole new world she did not know existed – New York City!  She moves into a building owned by her Aunt Peg, which is four levels with the theater on the first floor and apartments above.  Peg, and her partner Olive, run the “Lily Playhouse” and Peg has allowed all sort of colorful characters – actors, showgirls, musicians — to live there free.   Vivian becomes the resident seamstress.  They all participate in the theater, which serves the local working community with simplistic Vaudeville-like song and dance shows.

Sucked into the nightlife and magic of theater, Vivian becomes friends with some of the showgirls.  When they discover she is a virgin, they help resolve the issue and Vivian quickly discovers the joy of sex with men.  She parties every night!

When a British star needs a place to live after her flat is bombed in London, Peg offers her and her handsome husband a place to live adding to the excitement at the Lily.  A play is written specifically for the actress and it becomes a giant hit.  Just when everything in the world seemed perfect and beautiful to Vivian, she is caught in a salacious and heartbreaking scandal and must return home.

Vivian eventually goes back to New York, but when the Lily Playhouse is torn down, she must find a job and her own place to live.  All seems right again until a man from her past confronts her provocative lifestyle and she is forced to take a new look at her way life.

This is a coming-of-age story.  Living with creative people in New York, and having sexual encounters was all fun and games for Vivian.  She loved the attention, power and variety.  But, just because she’s of age, has sex every night and drinks until dawn, it did not make her an adult.  She was still naïve and innocent.  So when she was caught in a salacious three-some, she found herself devastated by the unexpected hurt she caused.  The sexual pleasure did not out weight the emotional pain.

The men in Vivian’s life – her brother, father and a “friend” defined and dictated appropriate behavior.  She did her best to conform, but ultimately recognized she could not cope with their conservative, puritanical, patriarchal ideal of women. As the cover says: “You don’t have to be a good girl to be a good person.”

Author Gilbert does a beautiful job recreating the world of 1940s New York City.  It lives and breathes just like Vivian and her eccentric aunt and friends.  Surrounded by homosexuals, bisexuals and heterosexuals, Vivian begins to understand how complicated love and sex is, they are not the same thing, and the man-made rules about love and sex don’t always make sense.

The story is told by 89 year-old Vivian in the form of a letter looking back at her life.  Although this allowed her to reflect on the life she lived with insight, I would have preferred a straightforward telling.

The most fascinating moment for me in City of Girls is when Vivian is asked about her innumerable sexual relationships with men.  She confesses she has sex with men because it fills her soul to the core.  Sex is the only thing that truly satisfies her thirst and passion for life.  Right on!

In understanding her sexual cravings, Vivian comes to love the women in her life more fully – she sees how women can support, and provide strength and companionship to one another.

This is almost a feminist manifesto.  How wonderful that women can have the sex life they crave, just like their male counterparts.  Vivian is a fascinating character for her time. She pursued her sexual freedom, and ultimately built a world for herself that didn’t include men directing or dictating her choices – it was women who shaped her life.  Men provided the sexual comfort and satisfaction.

That is an interesting world, and perhaps one that reflects true gender equality.