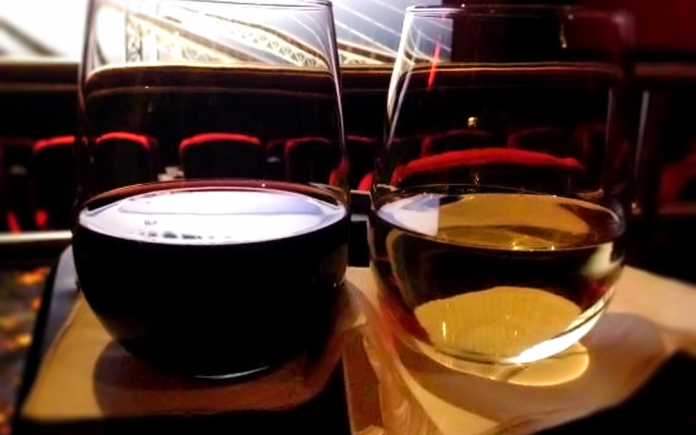 Having just read through last week’s CV Weekly, I was delighted to see its coverage of the 2023 Palm Springs International Film Festival which is on-going from January 5th to the 16th. This season, over 130 films from over 60 countries will be screening in venues across Palm Springs and Cathedral City. www.psfilmfest.org.

Of course I was reminded of the fact that this Vino Voice column was one of the first Southern California wine columns to do movie & wine pairing articles. From 2013 to 2016, with titles such as “Wine Cuddling at the Movies, “Last Picture Show Wine Pairing” & “Sipping on a ‘Reel’ Wine”, we played the imaginary scenario of recommending world class wines to sit and sip on while catching some of the films being showcased at the PS Film Fest.

And back then, we really got into it: “As we like to say, the Arts mix well: the art of film, the art of wine—it’s a natural. And you readers already know, as with food & wine pairings where one teams the different combinations of flavors, densities, touch, and nuance of the meal to the flavor points and counterpoints of a designated wine, movies offer us the same if not a broader matrix of jump-off points: Film origins, story lines, titles, geography and even character names can imaginatively take us to a myriad of wines around the world.”

Indeed, back in 2016 we finally wrote, “Many of you long-time CV Weekly readers, will remember that this column has joined in the fanfare itself by presenting some hopefully interesting wine & movie pairings, where we’ve—well, matched some festival films to particular wines because of some serious or crazed connection to one another. And we’ve had our fun—perhaps at your expense; fortunately, last year I pretty much promised to put any more ideas to a restful sleep.”

Well—it looks like our seven-year slumber will unfortunately be interrupted as we’re once again prompted to weigh in on some—perhaps wacky—movie and wine pairings. (By the way, those past recommendations lead many of our local movie houses to currently offer premium wines & spirits for their audience—cheers to that!)

First, we can start off easy by pairing a wine simply to the movie title: Argentina 1985, Argentina’s Oscar submission, “…a gripping legal drama offers a front row seat on the challenge to prosecute the de facto dictatorship government.” No big surprise here, as we go for the country’s leading varietal and export, Malbec. Originally from the southwest of France and the Bordeaux region, this grape has taken off to the fabulous heights of the Andes Mountains, just like Cabernet Sauvignon took hold in California’s Napa Valley.

Zuccardi, José Zuccardi Malbec, Uco Valley, Paraje Altamira ($42) This wine well connects to the movie, as this is “a serious Malbec, built for the long haul. Intense, harmonious black fruit aromatics; hints of spice, savouriness and a whisper of florality, opening up with time in the glass to include notes of richer black cherry and mulberries. Aging in concrete and old oak foudres. Incredible depth of spicy cassis fruit, with a base note of dry earthiness and ground black spices. Poised, with a long, lingering finish.

The talk for the past year or so, is that quarterback Tom Brady is the GOAT—Greatest Of All Time. That idea gets us to thinking, what is the greatest wine of all time? The purists out there would offer the 1974 Heitz Martha’s Vineyard Cab Sauv; others will claim the 1947 Cheval Blanc or the 1961 Chateau La Tour.

But let’s go to the movie itself where we find four women of a certain age on a particular agenda. And the particular wine they seem to be cuddling with is a rosé champagne. Now the first ever rose champagne to be produced and sold in the market, Ruinart Rosé, launched their greatest perfection in the year of 1764. “Coming with peach colours, the Ruinart Rose still maintains its glorious history and taste.” A crisp and lightly tannic flavour. There is even a subtle warm spice to it on the finish.” However, it costs approximately $2,012—affordable, no doubt, to pro quarterbacks and Hollywood actresses.

Revoir Paris “…an emotional detective story about how we find our way back to each other.” “Revoir” can mean “meet again”. So meeting again in Paris can probably take us to a sidewalk cafe or bistro where we can always get our share of bistro wine: Beaujolais. The good news is that the recent vintage of Beaujolais to be released, the 2022, is considered to be one of the best in decades; the bad news is that the horrendous windstorm in a week took out most of the crop. Thus, there ain’t much of it around. So if you can find it or a Beaujolais-Villages Nouveau—grab it!

Fortunately for you readers, we’re now running low on column space. So Don’t Worry Darling, “… the desert landscape, palm studded streets and mid-century modern architecture of Palm Springs fuels a thrilling and enigmatic mystery of a picture-perfect community.” Well—as your friendly neighborhood wine steward over at the Palm Springs Ralphs Market, don’t worry on a particular wine choice, I’ll be giving you some great advice on a nice wine to pick up for the flick. See you at the movies!—cheers!