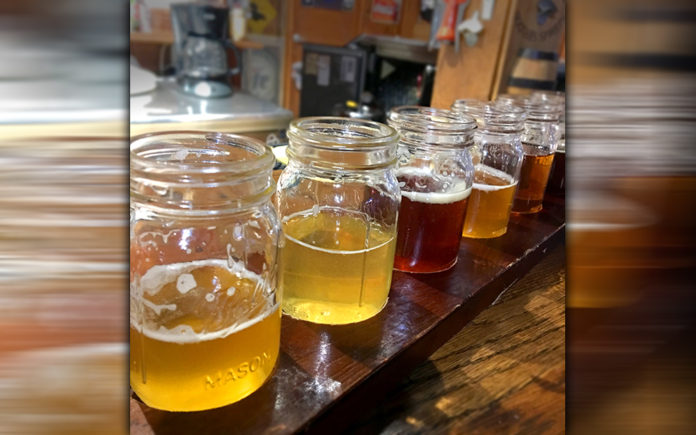 Now, I’d read some Yelp reviews warning anyone who can read to stay away from Big Bear Mountain Brewery, but I went anyway, and now I’ve got no one to blame but myself for the cringefest that followed. From the under attenuated and flat beers, to the manager who was in the middle of a three-day amphetamine bender, I’m pretty sure I managed to find the worst run brewery in the world.

I was in the town of Big Bear Lake for the weekend when I checked Yelp for breweries in the area, and Big Bear Mountain Brewery showed up on the map. Disregarding a comment which literally read “This place is something out of a scary movie, Beware, DON’T GO”, I followed the directions to an old, two story wooden tavern that housed the brewery.

The only inhabitants were a sketchy and frazzled looking blonde woman who twitched nervously behind the register, an older and semi-conscious looking gentleman behind the bar who wore the most confused yet placid expression on his face (like he was having an acid flashback and reliving the glory days of 1973), and an 18-year-old kid who was busy making’ sammiches’ in the kitchen and ringing a bell to let the staff members know that the order was up.

A party of five young people, no doubt fresh from snowboarding adventures, were the only other patrons on this slow evening.

I sat at the bar and asked the bartender for a flight of beer, to which he replied, “hrrm..yeah I uh, mmmph, just one sec-..okayeah..” before walking over to the small flight glasses and sniffing them for cleanliness.

The kid behind the kitchen counter smacked a burger on the counter and dinged his bell.

The bartender was in the sweetest looking daze as he held the paddle full of flight glasses what appeared to be a full two- feet under the tap fountains, filling each little glass with a different flavor of pure foam. 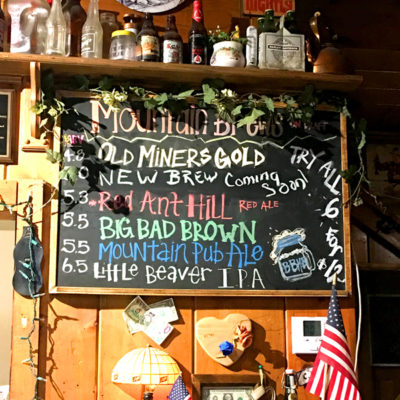 The sound of the bell startled him, and he immediately put down my partially filled glasses of foam to turn around and get the burger from the kitchen window.  He asked the kid in the paper hat a question, to which the kid yelled the same question across the bar to the blonde manager behind the register.

She blinked and twitched her way over to the bar with an exasperated expression on her face. Meanwhile I sat there staring at my partially completed flight of beer as it sweat and warmed in the heated air of the brewpub; my left eye twitching involuntarily.

After a few minutes of confusion, the sweet old bartender brought the party their order, and returned to fill my flight paddle of beer. I know it was fifteen minutes total between him starting to fill my flight, and me getting it, but it felt longer. Years longer. Revolutions could have been started and won. The Big Bang could have reversed itself and dark matter could have engulfed the universe because it seemed like a fricken eternity since I first asked him for that beer flight.

Finally, I had what I came for, a little paddle on which sat six tiny mason jars filled with beer. I took a sip of the first golden colored brew… and it was flat.

Not one to be discouraged so easily, I moved on to the next ale which was a brown, and it was syrupy, cloyingly sweet. If you’ve ever had a friend who home-brewed their own beer, then you’ve had a friend who’s forced you to drink his terribly brewed and under fermented creations (and while we’re on this topic I’d like to apologize to everyone who I’d forced to drink my terrible early homebrews. Especially the ones that involved scorpion peppers. Sorry fam, you were all my guinea pigs and I understand why you never return my calls anymore).

After sampling all six of the Big Bear Mountain Brewery’s offerings, my tasting notes said flat, cloying, artificial, flat, good, and meh. I asked the blonde manager if the beers were made there at the restaurant; the kid in the cook’s hat throwing food on the counter and dinging the bell all the while.

She sat down next to me and began to speak a hundred miles a minute, her eyes wide and dilated, her hands gesticulating wildly. “I don’t know anything about the beers. Ha! It’s the owner, she doesn’t want us to know,” the blonde manager declared conspiratorially, “I asked her what we should tell the customers, and she threw the menu at me and told me to do the same to customers.” The manager threw the menu at me for effect, the kid in the kitchen dinged his bell, and I’d had enough. I settled my tab and moved on to the bars downtown, and even though the beers themselves left a bad taste in my mouth (holy shit, and how), the brewery didn’t. ..I’m just kidding, it totally did!

The craft brewery bubble seems to be bursting, and in beer cities like Denver, San Diego, and Portland, stiff competition is causing lesser breweries to close their doors. Big Bear is not a beer city and there is very little competition, so that might allow the Big Bear Mountain Brewery to remain in business long enough for you to ignore the yelp reviews and experience the train wreck for yourself.