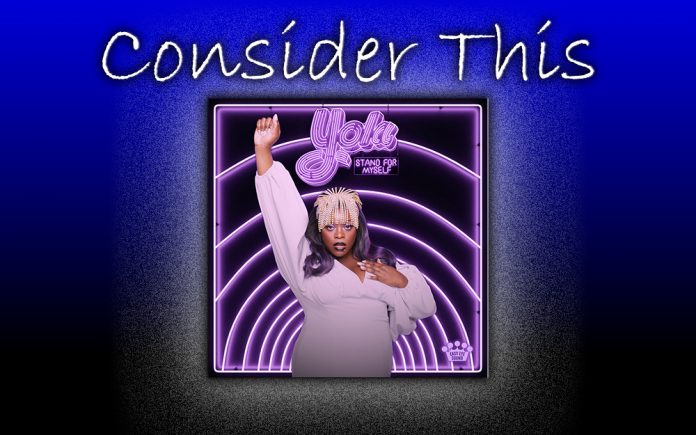 “It was hard enough to go on and live on

I was so tired of trying to belong

I was lost in the city, you could see it in my eyes

But I was still a dreamer in the middle of the night.” That’s Yola speaking her truth on the title track of her stunning sophomore album, Stand For Myself

Initially, Yola characterized her sound as “De-genred Pop.” It’s an accurate, albeit unwieldy description of music that effortlessly hopscotches from one style to the next. She’s since settled on a pithier, more playful term, “Genre-Fluid.”

The British singer-songwriter, was born in the early ‘80s. Raised by her Barbadian mother, she has very few memories of her father, who split the scene not long after she arrived. Growing up in Portishead Bristol, she endured a rough upbringing Risking her family’s disapproval, Yola (ne’ Yolanda Quartey) set her sights on a music career early on. Seminal inspirations included Minnie Ripperton, Elton John, A Tribe Called Quest, Blur, Pulp and Randy Newman, but her true musical epiphanies occurred after multiple spins of an Ella Fitzgerald compilation and Aretha Franklin’s ‘Young, Gifted And Black” album.

Yola began performing at age four and played in a Rock band during high school. Her first professional gig was singing standards in a Jazz band. Soon enough she was hired to “topline” (essentially singing at the top of her lungs on numerous dance singles) on music from Bugz In The Attic and Massive Attack. As astonishing as she was, it was clear that she was holding back a piece of herself during these performances. Record deals were proffered, but she opted to bide her time until she felt ready to launch a solo career.

Yola experienced her share of hardship as an adult. There was a period of homelessness after a house fire. She took a hiatus from music twice, the first time because she developed nodules on her vocal cords, the second time was to care for her mom before she passed away. For a spell she fronted the Brit-Americana band Phantom Limb, who recorded three albums. In recent years, she has stated that she found the experience “too bro-y.”

Finally, Yola relocated to the U.S. After ping-ponging between New York and Los Angeles, she landed in Nashville and it ended up sticking around. She recorded an EP and was also getting songwriter work. It was around this time that a mutual friend sent Dan Auerbach a video of her performing. Best known as half of the Black Keys, he has also formed his own label, Easy Eye Sound and carved out a career as a producer (Dr. John, Jessica Lea Mayfield, the Growlers, Ray LaMontagne, Lana Del Rey, Pretenders, Shannon And The Clams). He immediately offered to produce an album for her.

Walk Through Fire arrived in 2019, receiving rave reviews and respectable sales. Even her longtime hero, Elton John was extoling her virtues. Nashville singer-songwriter Natalie Hemby began singing Yola’s praises to Brandi Carlile when they were in the studio recording their Highwaywomen debut (the Americana Super-Group also includes Amanda Shires and Marren Morris) The pair spent a few hours geeking-out on whatever Yola clips were available on Youtube and wound up inviting her to play on the album. (Although prior commitments kept her from fully participating, Yola sang a bit on the record and joined them onstage a few times). Walk… was nominated for four Grammy Awards: Best New Artist, Best Americana Album, Best American Roots Song and Best American Roots Performance). Although she left the 2020 ceremony empty-handed, she received some encouraging words from legendary musician John Prine (who passed away a couple months later from Covid 19).

Now she has returned with her dazzling follow-up, Stand For Myself. The opening three tracks, “Barely Alive,” “Dancing The Tears Away” and “Diamond Studded Shoes” sets the vibe for this wide-ranging, 12-song set. “Barely…” begins tentatively with fluttery organ notes, serpentine guitars, tensile bass and a percolating beat. Yola’s warm and supple vocals glide across the arrangement, explicating seemingly Covid-centric lyrics; “I been here and I know how it is, I been living it all alone for all these years, isolated we hold in our tears/And we try to get by, and we strive, but we’re barely alive.” The arrangement and instrumentation lock into a creamy, Philly-flavored T.S.O.P. groove, that is equal parts languid and urgent.

“Dancing…” is powered by a slinky, conga-fied rhythm, flinty bass lines, glossy guitars, propulsive brass and a four-on-the-floor beat. Unspooling like a long-lost Disco classic, lyrics offer a last dance, last chance for love and romance, that’s anchored by Yola’s buttery vocals; “Breaking up is always hard to do, our last dance is all I want with you, I can’t go and do it all again, and pretend that I ever wanted to.” Pulsating horns, twinkly percussion, sleek guitar riffs and insidious clavichord notes conspire to keep feet dancing through the heartbreak.

During the heyday of AM Rock radio in the early ‘70s, “Diamond Studded Shoes” could have sandwiched nicely between Elton John’s “Philadelphia Freedom” and “Maxine Nightingale’s “Right Back Where We Started From.” A heady brew of Soul, Disco and Country Rock, lithe guitar licks partner with pliant bass, churchy keys, playful pedal steel and a spring-loaded Jack-In-The-Box beat. Inspired by tone-deaf comments made by Britain’s ex-Prime Minister, Theresa May, lyrics like “You and I are trying, but we don’t get to decide, when the man comes for our paychecks won’t you tell me it will be alright/We aren’t the rich ones, some of us’ll barely get by, they buy diamond studded shoes with our taxes, anything to keep us divided,” address the income inequality that allows the rich to get richer, while the poor barely break even. The Gospel-inflected call-and-response chorus, as well as the twangy, gut-string guitar and triple-time tribal tattoo on the break, keep things chooglin’.

This record redefines the term “all killer, no filler.” Take “Starlight,” an elegant mid-tempo groover that distills trace elements of two Motown classics, Stevie Wonder’s “Master Blaster (Jammin’)” and the Supremes’ “Ain’t No Mountain High Enough.” Over meandering bass lines, wah-wah guitar, stately harpsichord, a wash of keys and a sultry beat, Yola’s hiccup-y vocal cadence funhouse-mirrors Stevie on the verse. As strings swirl on the chorus chiffon-y backing vocals envelope Yola’s stentorian roar, much as Mary and Florence gave Diana some symmetry. Lyrics advocate for delayed gratification; “Never take your love for granted, I’ve been waiting on you like we planned it, taking your time, I’ll sip my wine while I wait… don’t be late.” Stinging, bottleneck riffs partner with sparkly harpsichord on the break, before powering down to just thump-y bass, a thwocking beat and Yola’s authoritative voice.

Then there’s “Whatever You Want,” a Country-Soul combo-platter fueled by Honky-Tonk piano, rangy guitars, sturdy bass lines and a pile-driving rhythm. Straight from the giddy-up, Yola informs an inconsiderate cowpoke that her boots are made for walking; “Well, I know it wasn’t love, but I was told it would be enough, Yeah, I thought it would be alright, but I’m not going to stay and fight…. now I’ve made my choice, no more good ol’ boys.” Her usual smoky vocals adopt an exasperated rasp as she recounts his careless ways and an incendiary guitar solo on the break, equal parts Glam and twang, signals a reclaimed measure of self-respect.

On “If I Had To Do It All Again,” a hulking kick-drum beat and tambourine shake connect with cascading acoustic notes, roiling bass, rippling keys and zig-zag electric riffs. Here, Yola rethinks a messy break-up, setting aside the flaws and foibles that tore them apart, recognizing “It’s a long and lonely highway by yourself, you could drive all night and never get too far, you went and did it your way, no one else, but you only put the miles upon your heart.” She soars on the bridge as plinky piano and prickly acoustic guitars shadow her ascent. Squiggly synths, sumptuous strings and Spaghetti Western guitars usher the song to a close.

As much as “If…” is plush and opulent, “Break The Bough” is spare and stripped-down. Chicken-scratch guitar riffs collide with a finger-poppin’ bass line, muted keys, Boogaloo horns and a chunky backbeat. Wrapped up in such an exuberant package, the instrumentation and arrangement nearly camouflages soul-searching lyrics where Yola seems to be speaking to her late mother; “Silently free the soul, oh, let it be released, let it spread and find a home, and maybe then you will find peace.” As pounding piano and pinging guitar see-saw through the mix she addresses their strained relationship “Now I don’t know what I’ve lost, and I don’t know what I miss, I’ve lived without your love for so long, I sometimes wonder if I even exist.”

The action slows on “Now You’re Here” and “Like A Photograph.” The former is lush and laid-back propelled by whooshy keys, drowsy bass, shang-a-lang guitars and a rumbling kick. Yola’s vocals are languid and serene and she embraces a new love, even as old heartache subsides; “I was lost in the wake of another heartbreak, doing everything to pull me in, Honey you were the wave that swept me away and showed me how to live.” The song builds to a thrilling crescendo, layering in handclaps, vroom-y guitars and a peppery horn fanfare before quietly powering down.

The latter easily slips into a supple, Quiet Storm groove. Sonorous, synthesized horns and warm, Hammond B3 colors are bookended by ornate piano chords that confidently trace the opening notes of Burt Bacharach’s epochal “Don’t Make Me Over.” Yola’s opening gambit dispenses with diplomacy; “Whoever said life was like a river that was gonna roll on forever, had to have been out of their mind.” Unlike Irma Thomas, time is clearly not on her side. Willowy acoustic guitar, twinkly glockenspiel, searing electric guitar spiraling strings and lonesome pedal steel swell behind Yola’s powerhouse vocals as the song coasts to its conclusion.

Other interesting tracks include the sanctified Soul of “Be My Friend,” which features quiescent backing vocals from Brandi Carlile. Then there’s the Gospel-inflected “Great Divide.” The album closes with the Psychedelic Gumbo that is the title track. Gutbucket acoustic riffs are matched by menacing bass, which provide ballast for Yola’s soaring voice. A stickity backbeat kicks in behind fuzz-crusted electric licks, bloopy synths and silvery piano. Lyrics reveal that she was lost, but now she is found; “Now I’m alive, it’s hard to explain, it took this much time, it took this much pain/You can get here if you’re willing, let go of yourself for a new beginning.” As the arrangement ramps up, Yola’s vocals become more growly and ferocious, just as quickly the song winds down, stripping away the instrumentation until it’s just strummy guitar, bucolic keys and Yola’s determined croon.

Not too many artists can create a second album as compelling as their debut. But with Stand For Myself, Yola has successfully sidestepped the dreaded sophomore slump. Perhaps that’s because this time around she co-wrote most of the music with collaborators like Natalie Hemby, Ruby Amanfu, Hannah V., Joy Oladokun and Liz Rose. Their presence gives the record a welcome jolt of distaff energy. Once again, production chores were handled by Dan Auerbach. To paraphrase both Sam Cooke and Diana Ross, it’s been a long time coming, but now, it’s finally Yola’s turn.