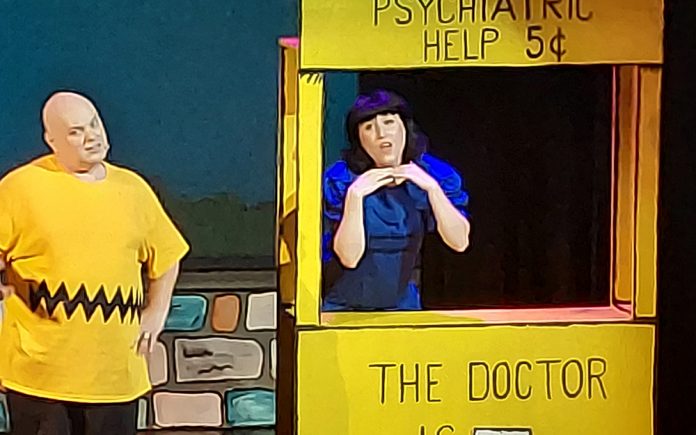 Like a long drink of ice-cold lemonade on a sweltering summer day, Palm Canyon Theatre’s, “You’re a good man Charlie Brown, the Musical,” hits the exact right spot in quenching your thirst after this drought of live theatre we’ve endured.

Beginning in October 1950 through January 2000, Charles M. Schulz created and published one of the most popular and highly acclaimed comic strips in history.  “Peanuts.” Featuring Charlie Brown, his dog Snoopy, Lucy, Linus, Schroeder, and a cast of characters that reflected world views through the eyes of children.  Schulz’s comic strip did not explicitly address topics such as racial and gender equality, so much as assume them to be self-evident in the depiction of his characters.

In 1967, the inevitable happened, the musical, “You’re a Good Man Charlie Brown,” was created with Book, Music and lyrics written by Clark M. Gesner.  Who could resist bringing these internationally popular characters to the theatre? 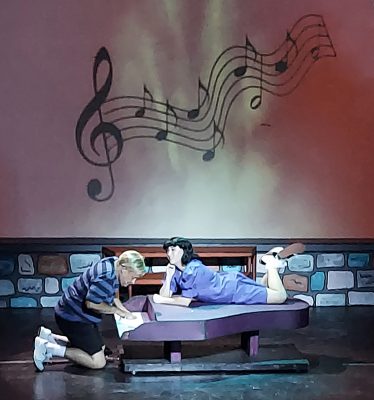 When looking for a show to light-up the stage and bring them out of the pandemic-imposed lockdown, Palm Canyon Theatre, decided that a small cast, minimal set requirements and loads of laughter would be the best ticket in town.  And they were right! The Layne Family dusted off their never empty bag of magical talent and staged this light hearted, poignant and humor filled musical production of “You’re a Good Man, Charlie Brown.”

This perfectly cast ensemble kept me engaged and smiling from start to finish. Watching Schultz’s beloved characters brought to life was pure magic. Through music and laughter, Gesner’s script exemplified both the simplicity and struggles of an average day in a child’s world.   Keith Alexander (Linus Van Pelt,) Allegra Angelo (Sally Brown,) Leslie Benjamin (Lucy Van Pelt,) David Brooks (Schroeder,) J.W. Layne (Charlie Brown,) and Paul Grant (Snoopy.)  Singing, dancing, teasing, loving and learning, this group of friends took us through their school day, baseball practice, homework, and rabbit chasing.  Snoopy chased the Red Baron, Lucy psychoanalyzed Charlie Brown (for a 5cent fee,) Linus sang an ode to his blanket and Sally taught us about her new philosophical approach to life.  Schroder made a futile attempt at leading a choir practice and Charlie Brown was the average kid just trying to be noticed by the little red headed girl.

Each new musical performance made me think, oh this character is my favorite, until the next number was presented and choreographed and I was once more swayed by the talent of the following performer.  All of the actors presented their role with exactly the right amount of familiarity and uniqueness, allowing them to capture the essence of each individual character.

While I secretly might wish for an updated version of this musical which would include some of Schultz’s later characters, Peppermint Patty, Franklin, Pig Pen, Woodstock, these would only be icing on the cake for an already stellar cast of characters. 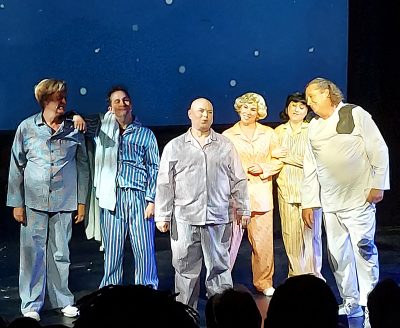 Watching this show was pure joy and I cherished every minute of being back in a theatre, with the anticipation of a fun musical experience (and air conditioning) bringing us all together for a night of theatrical pleasure.

Charlie Brown, was wonderfully directed by Dr. William Layne, magically Choreographed by SE Layne, with just the right amount of creative scenic design by William Layne and JW Layne. Lighting design by J.W. Layne, costumes by their in-house magic man, Derik Shopinski, And Musical Direction by Scott Smith and his orchestra, David Bronson (drums,) Larry Holloway (bass,) this show shined from curtain up to curtain down.

If you are looking for an opportunity to feel pure elation at being a part of the world again, this is the show to see!