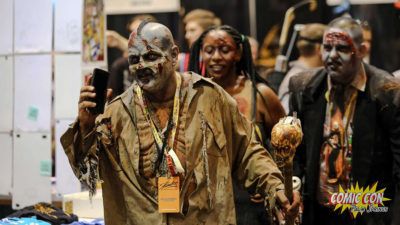 “It’s a gathering of people that enjoy the horror realm… they like The Walking Dead, shows like Z Nation. It’s a chance for [them] to go do something that they normally don’t get to do,” Aguirre says. “It’s a gathering of friends. We do a walk that starts at one location… like a parade. There’s a route that we travel at a set time on a set date and that’s what we do. And we have other people… the good guys, zombie hunters and such that are there to keep the public safe. This year we have the Department of Zombie Defense coming out … they’re going to be there to make sure that none of the zombies decide to try to eat the people watching the show.” Included in this year’s zombie defense, to celebrate the 40th year of Star Wars, Jedi will be joining the ranks to help keep the streets safe from a zombie horde attack. 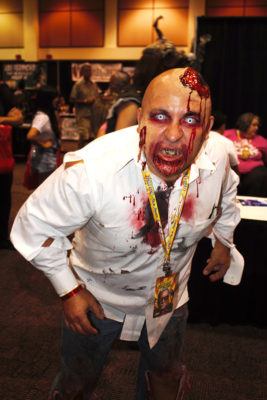 On the Comic Con Palm Springs website, a list of rules and guidelines appears with the event information. Many of the guidelines have to do with ensuring the safety of participants and bystanders, such as refraining from attacking bystanders and walking into traffic. Aguirre’s team emphasizes and ensures safety, with Aguirre saying, “It’s a cosplay. It’s a show; nothing brutal or disturbing. This is a family event where families get to get together with their kids, dress up, do things that’s not the norm. I’ve had I think one incident where somebody got a little overzealous and knocked somebody down, but for the most part it’s really about family. The people that you meet, the people that you interact with while you’re there, people that do photo ops with you and everything else, it becomes more personal. People enjoy the creativity and the artistry and the craft that everybody puts into their costumes, into the way they look, into what they do.” Aguirre’s team sets up water stations for attendees and there will be police and EMT staff in attendance, as well as volunteers. “I lead the bad guys and they all follow my command. So between me and the good guys, which are the agents, we are successfully able to lead the horde of undead through the streets of a city.”

In addition to the Zombie Walk, AZ Corpse Crew will have a booth on the convention floor. “We have a booth that will be doing makeup… booth 110, we will be doing special effects makeup shows on Friday and offering makeup to the public,” Aguirre says. The price of having your makeup done by one of AZ Corpse crew’s professional artists is dependent on what you ask them to do. If you want a simple look, what Aguirre calls “fresh dead,” it could be as low as $15 while more intricate looks will cost closer to $40. “We have hairstylists, we have makeup artists, we have a guy from season 3 of Ink Masters known as The Ink Demon. He’s coming as part of our crew this year,” he says. This booth will be available every day at the event. There will also be a pin-up style makeup artist, Tanya Miley, available and guests will be able to choose whether or not to incorporate zombie makeup as well. 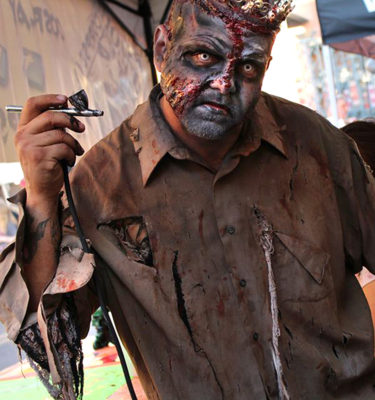 AZ Corpse Crew is also involved in the Zombie Cafe at the Comic Con. “I am supplying the actors and the characters that will interact with the majority of the cafe. So throughout the day, our characters will frequently show up at the cafe to interact and entertain and play with the people,” Aguirre says. Though Aguirre’s crew is not involved in the Zombie Maze Room that will also be happening at the Comic Con, they plan on going through it as a team building exercise.

The event is very popular and means a lot to many of the attendees. “People will line the streets… when the zombie walk is about to start. It’s basically a parade,” Aguirre says, but some onlookers are people who were just in the area and get to see the event. “To see the excitement on people’s faces to see families that are bonding in ways that they don’t normally get to bond because they’re doing something outside the box, that’s what it’s all about for me. I have a son that’s 8 years old and he has Tourette’s and he plays my mini-me. He tells me sometimes, ‘Dad, why do you do what you do?’ and I say ‘Because it’s fun’ and he goes, ‘that’s why I do what I do,’” he says. “If you can make it about family, and then you go out somewhere and you have thousands of people that come out and want to join your family, in a sense, that’s what the experience is about.” 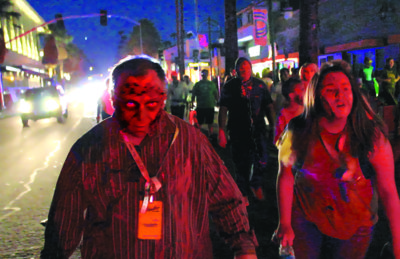 Aguirre emphasizes that his event is meant to bring people together to have fun and attain a sense of fulfillment from feeling as if they’re able to participate in the zombie world that they see in their favorite show or video game. To this end, he and Comic Con Palm Springs founder Christopher Spellman invited people from Desert Arc, a local organization that assists people with disabilities, to attend the Zombie walk and one day of the Comic Con. “Last year we put on a Zombie Walk on Saturday that was catered directly to Desert Arc. My son led that walk because he also has special needs… I want to say 30 people from Desert Arc showed up in vans and we did all their makeup for them and we did the zombie walk around and throughout the convention center for as long as they wanted to go and the looks and the expressions on these people’s faces was something that I’ll never forget. To have a gentleman… that had Down Syndrome come up to me after he was done with the walk and give me the most overwhelming hug that I think I’ve ever got from someone and tell me ‘thank you for making me feel normal’ hurt, but felt so rewarding at the same time because I understood a little bit where he was coming from… during the Zombie Walk, all these gentlemen and women that have these special needs were able to let it go. If they had tics or… walking disabilities… they were allowed to let it go… they could let themselves be themselves,” Aguirre explains. 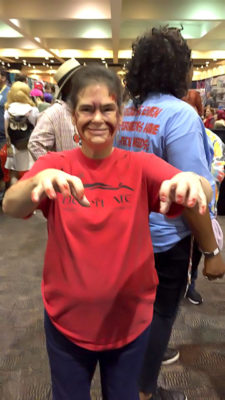 The Zombie Walk is always a popular addition to events, with Aguirre saying, “Here in Arizona, we have upwards of 20,000 people that come to our Zombie Walk in October. I have been leading all the Zombie walks over downtown Phoenix for the last 5, almost 6, years. I did it for Phoenix Comic Con for 4 years… Palm Springs picked it up last year and we hope to make it even more epic for everyone involved.” The walk will end at the Hard Rock Hotel for an all-age after party that is included in the price of admission to the Comic Con. Comic Con Palm Springs will occur August 25-27 and the Zombie walk will occur August 25th, gathering starts at 7:30 p.m. for the official walk at 8p.m. outside the Palm Springs Convention Center. For tickets go to comicconpalmsprings.com and for more information about AZ Corpse Crew go to azcorpsecrew.com 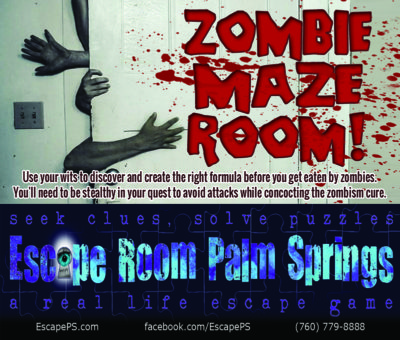