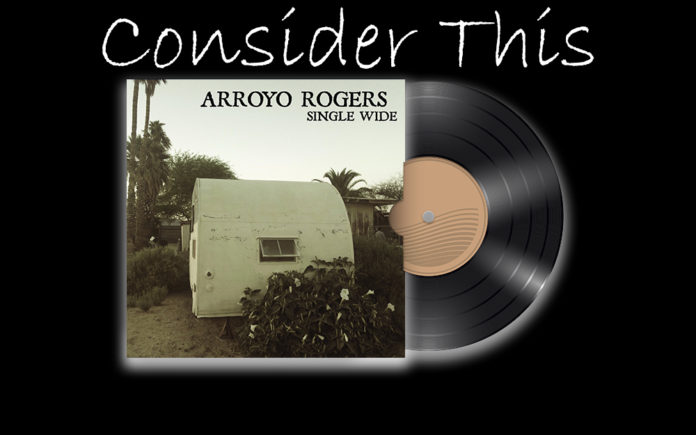 It was bound to happen, the music community of Joshua Tree has it’s doyenne, Victoria Williams, it’s unofficial Mayor, Teddy Quinn and now, it’s very own Johnny & June, Kip Powell and Lisa Mednick Powell. The couple, who have lived in the High Desert for several years, have just released their first Country album as Arroyo Rogers.

Kip Powell grew up on a farm in southern Iowa. His mother and sisters were musical, and he shared their talent, picking up organ and trombone as a kid. He graduated to bass by junior high and by high school he had played in a couple of bands. Early influences included everyone from Bach, Merle Haggard and Led Zeppelin, to the Nitty Gritty Dirt Band, Humble Pie, Grand Funk Railroad, Stravinsky and Yes.

Jazz became his primary passion in college and after Kip earned a B.A. in Music from the University Of Northern Iowa, he pursued a career in music and hasn’t looked back. 40 years in, he’s earned a reputation as a bassist and well-respected sideman, effortlessly leapfrogging from Rock to Jazz, Blues, Country and Gospel. More importantly, his musical journey led him to Lisa Mednick.

A native of Washington, D.C., Lisa’s music has spanned so many genres that it defies categorization. The Meet The Beatles album became an early musical touchstone and pretty soon she was studying classical piano. By the time she came of age she quit college and began performing, first Around D.C. and then in New York.

Initially, joining bands like The Chumps and Half-Japanese gave Lisa the confidence to start her own band, Pop Decay. Their sound was a provocative synthesis of Folk and Funk and they regularly played CBGB’s and Max’s Kansas City before calling it quits in 1982. Following an audition with Joe Jackson, she returned to Washington D.C. to continue her musical education at the Howard Musical Conservatory.

There, she studied Jazz under the guidance of John Malachi. After relocating to New Orleans she soaked in the sounds of the Crescent City, joining the Rock band, Song Dogs and later, a Reggae band, Exuma. Next, her musical travels took her to Austin, Texas where she began to put down roots. She formed an acoustic duo, Ship Of Fools, with Bill Conley. Soon after that, she collaborated with Alejandro Escovedo, Michelle Shocked and played on the Chills’ seminal Submarine Bells, album. It was around this time that she connected with Kip Powell.

Ironically, each had played in Ray Wylie Hubbard’s band, at different times. Touring together in Radney Foster’s band, they fully bonded as the lone vegetarians trying to navigate the carnivorous Lone Star State. A few years after meeting, they married and moved to New Mexico. Wanting to be closer to their families in Southern California, they relocated to Joshua Tree, finding an artistic enclave that has drawn comparisons to Paris in the ‘20s or Laurel Canyon in The ‘60s.

Arroyo Rogers first took shape while Kip and Lisa were living in Espanola, New Mexico, just jamming with friends. Initially known as Forty Miles Of Bad Road, (a sly nod to a Duane Eddy instrumental), This new musical experiment allowed them, along with other like-minded players, to completely indulge their love for classic Country. The Hi-Desert incarnation was re-christened Arroyo Rogers as a sideways homage to singing cowboy Roy Rogers. Recently the pair went into the studio to record five Kip originals and two collaborations with Lisa, the result is Arroyo Rogers debut EP, Single Wide.

The opening track, “Promised Land” gets things off to a rollicking start, a pile-driving beat connects with plaintive pedal steel, thunderous bass, staccato clavinet along with intertwined acoustic and electric guitar. The lyrics chart something of a Southwest travelogue from Amarillo to Amboy and celebrates life’s simple pleasures; “She met me in the Amboy parking lot, we got a trailer out there, that’s all I got, well, the rattlesnakes they’re afraid of me, and the promised land ain’t what it used to be/It don’t rain, don’t snow and the grass don’t grow, I got a single wide, a waterline and my baby, I got a single wide, a waterline and my gal.”

In true Honky-Tonk tradition, the themes here are Lyin’ lovin’ (Louvin) and liquor. This is especially evident on three tracks. “Eleanor” is tethered to a clip-clop gait, rumbling bass, shaded pedal steel, wraparound acoustic and electric riffs and willowy organ. A self-confessed “cheatin’ fool on the loose,” questions his attraction… “Do I love you for your beauty Eleanor, or is it ‘cause you own the liquor store?” Even as he sees the errors of his ways, it’s too late, Eleanor has wised up and he is left alone, “a stranger in my own bed.” A Lonesome pedal steel solo on the break echoes his regret.

The jaunty two-step twang of “Three Sheets To The Wind” can’t disguise this sad-sack lament. The arrangement features twinkling piano, booming bass, weepy pedal steel and acoustic guitar. The lyrics offer a variation on Hank Williams, Sr.’s “Tears In My Beer” paradigm; “There’s a pale ring on my finger, where a wedding band used to be…It makes no sense to call it the game of love, for each one is a loser when it comes undone/The only winner is the Blue Ribbon beer in my hand, there’s a wet ring on the counter, where I set my new best friend/Now the jukebox plays a drinkin’ song, I’ll stumble home and sing along, I’m three sheets to the wind, alone again.”

The EP closes with “She Went Out For Cigarettes,” a dolorous shuffle propelled by tripwire percussion, strummy guitars and muted keys. The lyrics sketch out a scene that feels like the sandblasted Film Noir that author Jim Thompson’s metier’. The language is as spare and economical as “just the facts, ma’m” reportage; “There’s a dead man in the water, a radio in the tub, looks like an accident-an unexpected heart attack/He swore he’d walk the line, but he always let her down, she went out for cigarettes and never came back.” It’s an austere end to an expansive ride.

Except for the closing cut, “Single Wide” was recorded and mixed by Tom Stern at Blue Velvet Studio in New Orleans. Kip and Lisa sang on all the songs, their ragged but right blend echoing classic duet partners like George and Tammy, Conway and Loretta, as well as Exene Cervenka and John Doe from X. He played all manner of bass and electric guitar, she played accordion, clavinet, organ and piano. Their sound was fleshed out by drummer Doug Garrison, guitarists Bruce McDonald and Tom Stern, plus Dan Cooper on pedal steel.

If your idea of Country music is less Florida Georgia Line and more “I Walk The Line,” Arroyo Rogers has got you covered. Their music harkens back to a simpler time, but their lyrics have a 21st century twist. Hopefully a full-length album is just around the corner.