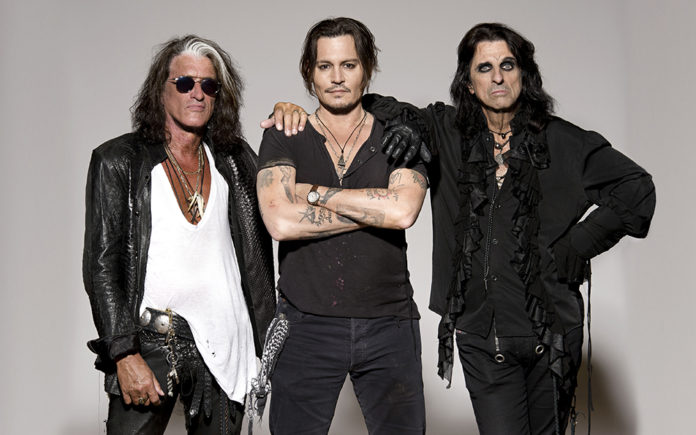 The Hollywood Vampires will be performing at Fantasy Springs Resort and Casino in Indio, CA on Saturday, May 18, 2019 at 8 p.m. Tickets are available at fantasysprings.com. Each ticket includes $10 in FREE slot play!

Below is our Coachella Valley Weekly conversation.

CVW: Congratulations on the release of your single, “Who’s Laughing Now.” What a great groove and drive to the song. My first thought is for those who may not be familiar with The Hollywood Vampires sound, if they hear that song it’s a great introduction to what you’re about.

Perry: “We’re just starting to get some feedback on that. That song, just thinking about those couple of riffs that came together on the record, I can’t wait to play them live. Like most of the songs that I’ve tried to write, from the start, I think about how it would be to play them live. Again, with this band and having done a couple of tours, it kind of shifted my aim a little different being with this band. It’s a little bit darker and a little bit heavier, you could say, and a lot more wide open than some of the things I’ve done with Aerosmith.”

CVW: The Hollywood Vampires is a salute and throwback to the camaraderie of musicians of the 70’s. How special a group is it?

Perry: “I get the feeling, if we had all met each other back in 1968, this would be the band that would be playing in a garage getting complaints around the neighborhood. At this end of things, it’s that kind of a vibe, with all the miles and years we put in all doing what we do live and that includes Johnny ‘cause what he does, even though he’s in front of a camera he’s still performing and he’s doing it live and he plays guitar a lot. He sits in every chance he gets with all of his friends. We’re doing it because it’s fun. We play for each other as much as we play for the fans.”

CVW: The Hollywood Vampires will be releasing your new album Rise on June 21, 2019. How are you and the band feeling about the new material?

Perry: “We’re really excited about the new record, there’s no doubt. After the last one, we went out and played pretty much the whole record. It was a cover record kinda thing but we knew that the band, when we hit the stage, we knew the band had a lot more to it than just covering some great old songs and paying homage to some of our friends that have passed away. We were really excited about finally getting in the studio and writing some new stuff and then going out and playing it live. Alice is amazing to play with. Again, everybody has had tons of time in the studio. Johnny’s been working in and out of the studio for years, everybody has. Really, it’s about getting on stage and playing live. We actually played quite a few songs from the new record on the last tour. We’ll probably play 7 or 8 songs off the new record for this tour.”

CVW: It’s had to be difficult to keep everyone on the same page and trying to schedule things. This album has to mean a lot to you.

Perry: “We’re really excited about getting out there. We’ve played everything from festivals to clubs it’s really a matter of lining up the shows. It’s so hard for us to get everybody together physically. Even with the record, there were times where there’d only be a couple of us in the studio we had about six weeks where we were all able to be together but then there were times where there would be just a couple of us. It’s a really special thing for us to get together and play. We’re looking forward to it.”

CVW: What’s the bird’s-eye view of the band’s songwriting/recording process?

Perry: “Everybody does everything. Everybody can write lyrics, everybody can write riffs, everybody can write songs in their own right. Everybody got their chance to do that little thing that they like to do best. I know Johnny likes to write lyrics and poetry, he really digs down for that, Tommy is a great producer and engineer and helps tie things together and a great guitar player and writes songs too. I do a little of everything but main thing is writing riffs. When we’re sitting there in the room and we’re all thinking about the songs. I’m thinking, ‘how’s this going to go down?’ how’s this gonna to play live?’ and Johnny’s thinking, ‘where am I going to put these lyrics?’ Tommy is arranging where he’s going to put his guitar. There are some lyrics in there that when you start reading them, listening and digging in they are saying a lot too. The main thing is the power behind them. Alice, of course, is the icing on the cake when he puts his stamp on it. He’ll write lyrics if he feels like he wants to put something in there that he wants to say or very suited for his style and ultimately it’s about the energy that these songs are going to carry.”

CVW: There’s no doubt you and this band thrive when you play live. What are the feelings about this pre-album release tour coming up?

Perry: “The thing about this band is…it’s really about the live thing. Alice, the band and I have certainly put in enough time on the road. There’s gotta be some kind of world record there. We’ve all paid our dues so to speak.”

CVW: You have some big league bandmates in Glen, Chris, Tommy and Buck, not to mention the taken by surprise talent of Johnny Depp. In addition, of course, Alice Cooper goes without saying.

Perry: “Johnny is a great guitar player, that’s probably one of the big surprises when people come after the shock of seeing him out there then they realize why he’s in the band. He’s got a lot to say. He writes great lyrics and plays great guitar. Everybody in the band are world class and Alice is one of the best front men I’ve ever played with. It’s really about the energy of the live show we’re all looking forward to.”

“It’s really a dream. There’s no pressure. On the last tour we played Wembley Arena and it was voted the SSE Live Award for ‘Best Group’ to perform in 2018. It was a great show. We were really happy with it. The band is probably the best-kept secret in rock and roll. I think if we had more time to tour, certainly more people would know about the band. Because it’s so hard to get out there and actually get on the boards and get everybody not doing their day job to get out and play. It’s really hard to get out. Every gig is like a treasure for us.”

CVW: How familiar are you with the Coachella Valley?

Perry: “Not as much as I’d like. I’m familiar with the whole southwest from Sedona. I spent a lot of time there; my mother lived there for 13 years. I’ve been all through the desert. We’ll be playing a residency in Las Vegas. I should probably get a Nevada driver’s license at this point with the Aerosmith residency coming up. That part of the country really fascinates me with what went on all through there. There’s an affinity for it.”

CVW: You recorded a really cool and bluesy track, “I’ll Do Happiness,” with our own ‘Super Lungs’ Terry Reid in 2016. What do you recall from that recording?

Perry: “It was great! We recorded four songs. One of them is waiting to be released. Actually, that’s the one that he’s been playing live in his set from what I understand. We’re just waiting for a good time to put it out. That was some of the most fun I had in the studio…working with him. He’s a great guy. Not only in the studio, but in the gigs we did together, it just doesn’t get any better than that. There’s no doubt he’s a superstar and world-class singer and songwriter. He had a lot of big songs in the 60’s and 70’s. He’s a great artist. I remember, some of those early songs, back in the 60’s. When Jack Douglas suggested that he come and sing, I was really blown away. I was really honored to have him come in and sing.”

CVW: Another mutual friend is Jimmy Palmer of 111 Guitars. How’s your ‘111 Toxic Tele’ that he crafted five years ago?

Perry: “Actually, I was playing that guitar in the studio not too long ago. Please tell him ‘good work! and thank you for making it.’”