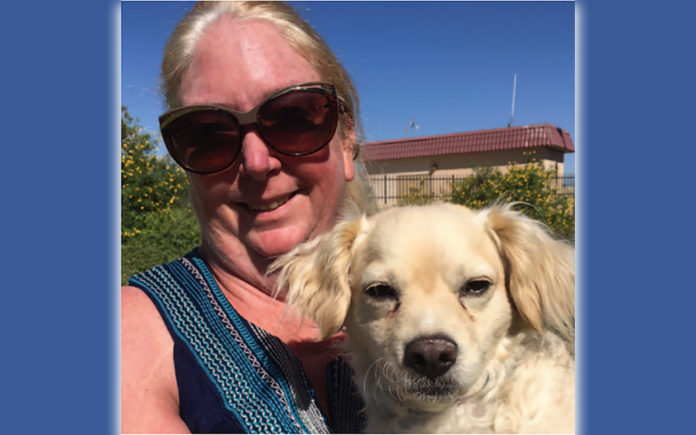 It was the dog’s fifth day on the run in the scorching June Coachella Valley heat.  The Spaniel mix dog’s throat was parched and his belly ached from hunger.  Three miles from his escape location in Palm Desert, he hunkered down behind some bushes seeking shade, weak and emaciated.  Somehow, he safely crossed through the traffic on Fred Waring and Monterey streets to end up on Clancy Lane in Rancho Mirage.  Ironically, this was a second escape for the rescue dog named Keannu, as he previously darted swiftly out the front door of his foster home when a house guest exited.  On that occasion, he was found and returned three days later.

Noreen Carr, horse Trainer/Instructor, was at work one morning when a coworker notified her of a stray dog hiding in the bushes outside the Hope Equestrian Center.  She recalls, “I began talking to the dog, and he appeared frightened.  Finally I reached out and touched his paw.  I had another horseback riding lesson to teach, and asked my colleagues to keep an eye on him but to leave him alone.  When I returned he had moved further back into the bushes.  I got a dressage whip and asked a friend to help capture him.  When he lunged at the whip, I reached in and grabbed his collar and he collapsed in my arms.  He inhaled water, but the only food I had was donuts.  I attached a rope to his collar, and picked him up under his belly I put him in the back seat of my car, but he managed to climb over and cling around my shoulders.”

The timing of Noreen’s discovering Keannu was prophetic.  Just four days earlier, her beloved 17-year-old Papillon Poodle dog named Tinkerbell passed away.  On that sad day, Noreen told her husband Brian, “Losing Tinkerbell is going to be a long heartache and recovery.  Now, sometimes I wonder Tinkerbell wasn’t somehow guiding this dog to find her mama and bring me some comfort.”

Noreen immediately knew she wanted to keep this handsome pup.  She dutifully called the phone number on his name tag identifying his rescue organization, Loving All Animals, and completed their official adoption process.  His name is now Biscuit and he is thriving in a loving home with Noreen and Brian.  Noreen jokes, “His crime wave is over, Biscuit is happy to stay at home.  He is the perfect dog…..kind, gentle, loyal.”

This wasn’t the first crisis for this 5-year-old dog.  He was part of a hoarding group of dogs, 40 in total, found in one home in San Bernardino.  Tracy and Matt from Loving All Animals rescued him and a sibling sister from the San Bernardino City Shelter for Loving All Animals.  We do not know how much neglect they suffered, though the dogs exhibit no symptoms of abuse.  In foster homes, the dogs had a calm remote quality to their personalities, but their sweetness and playfulness emerged as they began to relax and feel safe.

Biscuit had a happy ending, however thousands of pets go missing and are never found, leaving behind distraught humans not knowing their animals’ fate.  The quickest way to ensure your dog’s quick return is to keep an engraved nametag with your phone number on his collar. Get him microchipped, and keep your information updated.  Have good current photos of your pets on your cell phone, critical for making flyers and posting on social media.  Go door to door with flyers in the neighborhood where he was last seen.

Meanwhile, a dog named Biscuit could not be happier to staying safe and loved at his forever home.  Noreen reports Biscuit is by her side all the time, and never shows any inclination to run.  Noreen offers this advice for someone seeking a dog, “Rescue dogs are the best, they have a history and they are so grateful to get a home.  Go to a shelter to adopt!”  Contact Loving All Animals for help finding the perfect rescue pup at (760) 834-7000, www.lovingallanimals.org.