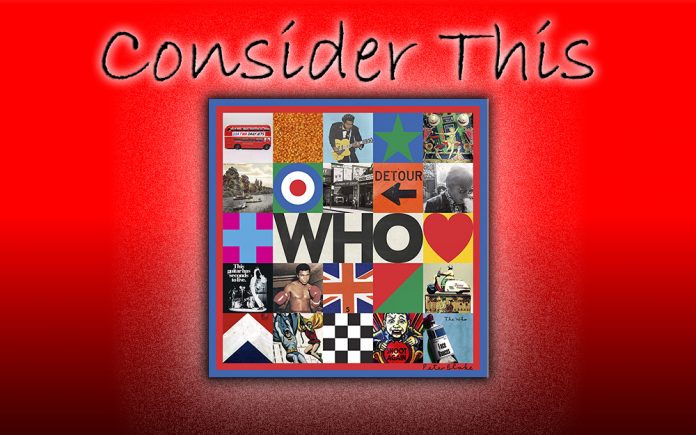 “I hope I die before I get old”

When Pete Townshend wrote those lyrics in 1965, he probably never expected to still be defending them 55 years later. Rock musicians lived by the same ethos espoused by Nick Romano in the 1949 film, “Knock On Any Door:” “Live fast, die young and leave a good-looking corpse.” Rock N’ Roll was a fad, a craze, not a life-long career.

Pete Townshend, Roger Daltrey and John Entwistle got their start as The Detours in the early ‘60s. They shared the same influences as other up and coming British bands, American Blues, Rock N’ Roll and Rhythm & Blues. Guitarist and songwriter Pete was in Art School. Lead vocalist Roger, was rough and tumble, a bit of a brawler who worked as a sheet metal worker. John, the bassist, nicknamed “the Quiet One” earned his keep as an accountant. Their sound truly coalesced when mad man/man-child became their drummer.

As with other up-and-comers like The Beatles and the Rolling Stones, The Who’s live sets contained covers and a few striking original songs. They became a favorite of the Mod subculture and quickly acquired hip managers that got them signed to the Decca label. There was an amphetamine rush to hit singles like “I Can’t Explain,” “Anyway, Anyhow, Anywhere” and the aforementioned “My Generation.” The latter track peaked at #2 on the British charts despite lengthy tours stateside, America was proving a tougher nut to crack.

By 1967, The Who had released three LPs, My Generation, A Quick One and The Who Sell Out. They toured relentlessly and were becoming known for their volatile live sets. They created a destructo theatricality all their own; Pete with his windmilling guitar style. Roger with his Greek God physique, Dionysian good looks and acrobatic mic twirls. Keith’s drumming style was a master class in calibrated chaos, and his impish sense of humor meant he wasn’t above secreting firecrackers in his drum kit. (They famously detonated during a live performance on The Smothers Brothers television show, producing a massive explosion that was the catalyst for Pete’s eventual hearing loss). John Entwistle was the stoic, content to hold down the bottom, letting his nimble fret runs do the talking.

At the Monterey Pop Festival, The Who and Jimi Hendrix flipped a coin to see which act would close the show. The Who won, playing first. Their six-song set was nearly impossible to top: Pete smashed his guitar neck into the amps and speakers, smoke bombs detonated and Keith kicked over his drum kit. Hendrix responded with a scorching closing set (he literally coaxed fire from his guitar).

When Pete got to work on their next album, the band was teetering on the edge of bankruptcy. Tommy broke all the rules, an ambitious collection of inter-connected songs about a deaf, dumb and blind boy, it became the world’s first Rock Opera. Released in May of 1969, it was a surprise smash hit. By August, The Who were demanding $13,000 to play Woodstock, a few weeks later they played The Isle Of Wight Festival in Great Britain.

Throughout the ‘70s, the band released epochal albums like Live At Leeds and Who’s Next, the latter was pieced together from an aborted concept album entitled Lifehouse. A brilliant effort, it featured instant classics like “Baba O’ Riley,” “Bargain” and “Won’t Get Fooled Again.” Two years later Pete tackled a second Rock Opera, Quadrophenia set in London and Brighton in 1964, following a young Mod named Jimmy, whose four personalities (his Quadrophenia), was fashioned after the four members of the band. The record was a magnificent achievement, unfortunately, Pete’s artistic vision was a little ahead of technology. Replicating the album live proved impossible.

Toward the end of the “Me Decade,” Keith Moon’s madcap antics were becoming less and less appealing, simultaneously, his chemical consumption had reached epic proportions. In late 1978, following the release of the band’s eighth record, Who Are You (their biggest seller to date, peaking at #6 in the U.K. and #2 in the U.S.), Keith was trying to wean himself from alcohol, a doctor prescribed Clomethiazole, which combats alcohol withdrawal. Predictably, Keith took 32 tablets, and was found dead at the age of 32.

The Who soldiered on, adding Small Faces/Faces drummer Kenney Jones and keyboardist John “Rabbit” Bundrick to their ranks. They returned to the road but tragedy struck in December 1979 when the band was scheduled to play a gig in Cincinnati, Ohio. A general admission show, some fans had lined up for hours in order to secure seats closest to the stage. Mistaking sound check for the beginning of the concert, the crowd rushed the few entrances that had opened. People were crushed and trampled underfoot, during the chaos, 11 fans were killed. The Who played the show, the venue and authorities deliberately kept them in the dark, anticipating a riot, had the show been cancelled. When the band found out they were devastated.

Although they toured behind them, their next two albums, 1981’s Face Dances and 1982’s It’s Hard were lackluster affairs. Pete had released a couple of successful solo albums, Roger had forged a second career as an actor. The logical move was to call it quits, which they did…for seven years.

A 25th anniversary tour happened in 1989, due to a tinnitus diagnosis, Pete shifted from acoustic, rhythm and lead guitar to preserve his hearing. Kenney Jones was out and Simon Phillips was behind the drum kit. Throughout the ‘90s, the band toured sporadically, highlighting albums like Tommy or Quadrophenia. In 2002 their momentum shuddered to a halt once again when John Entwistle was found dead from a heart attack in a Las Vegas hotel room. He was just 57 years old.

Still, Pete and Roger carried on, Pino Palladino picked up bass duties, and Zak Starkey (Ringo’s son) on drums. At this point, Pete’s brother Simon was a permanent second guitarist. By now their hits were ubiquitous, featured in films, commercials and television shows. Some fans and critics felt The Who had “sold out,” but Pete was unrepentant. As sole composer he was financially secure, but other members were dependent on touring and song licensing to stay afloat. In 2006, the pair shocked the world by releasing their 11th studio album Endless Wire. It was their first new music in almost a quarter of a century. Reviews were generally positive and the album debuted on the Billboard charts at #7.

In the ensuing years the current line-up of The Who have toured consistently. In 2014 they celebrated a milestone with The Who Hit 50! tour, the following year they were part of the storied Desert Trip line-up. A once and a lifetime concert series curated by Goldenvoice (and dubbed “Oldchella”) featuring Bob Dylan, Paul McCartney, The Rolling Stones, Roger Waters, The Who and Neil Young.

Now Pete and Roger have returned with their 12th studio album, their first new music in 13 years, epigrammatically entitled WHO. The album opens with the one-two punch of “All This Music Must Fade” and “Ball And Chain” “All This Music….” kind of fades in with pipe organ keys and Pete chanting the chorus like a mantra; “What’s yours is yours and what’s mine in mine, what’s yours is yours and what’s mine is mine” before drums crash, ushering in a typically anthemic Who song. Chugging guitar chords collide with sinewy bass lines and clattering drums. It’s tempting to assumed the lyrics address cynical critics; “I don’t care, I know you’re gonna hate this song, and that’s fair, we never really got along/It’s not new, it’s not diverse, it won’t light up your parade, it’s just simple verse, all this music will fade.” Spiky guitars see-saw on the break and pulsating synths sound as though they won’t get fooled again. It’s a bit of a pastiche, but an effective one.

With “Ball And Chain,” barbed wire guitar riffs cascade over painterly piano notes, bristly synths, tensile bass and a walloping beat. Roger’s rough-hewn vocals wrap around lyrics that take the President to task…except the President in question is Obama. (Exactly how old is this song?). Apparently, Pete has some timely things to say about #44’s campaign promise to close Guantanamo Bay military prison, and his failure to achieve political consensus. On the break, menacing synths and strings are bookended by slashing power chords. The musculature is mighty, but the sentiment feels obsolete.

And so it goes, nearly every song seems to strip old Who songs for parts. “Detour” is pleasingly chunky, building off the irresistible Bo Diddly beat of “Magic Bus.” Meanwhile, both “I Don’t Wanna Get Wise” and “I’ll Be Back” seem intent on minimizing the band’s musical legacy. The former blends swirly synths, electronic percussion, fluttery keys and shimmering guitars, cushioned by tinkling hi-hat action. Lyrics like “All the shit that we did, brought us some money I guess/And those snotty young kids were a standing success,” feel as though they’re pissing on their hard won success. We get it Pete, you’re a cranky contrarian and a card-carrying misanthrope…relax.

On the latter, Pete takes center-stage like a world-weary saloon singer, bolstered by Roger’s “Home On The Range” harmonica, twinkly electric piano, creamy strings, bare-bones guitar and celestial synths. The lyrics’ Autumnal ache mine the same territory as classic soul-searchers like “I Am One, “However Much I Booze” and “Blue, Red And Grey.”

The balance of the album is given way to sleek U2-yness of “Street Song,” which apparently references the Grenfell Tower fire of 2017 that claimed 72 deaths and 70 casualties. “Break The News” is relentlessly bouncy, a plaintive, piano-driven bridge momentarily makes it interesting, before reverting to the original cloying arrangement. Tracks like “Beads On One String” and “Hero Ground Zero” are just kind of meh.

The album rallies toward the end with the blistering “Rockin’ In Rage” and the windswept Bolero of “She Rocked My World.” But it’s too little, too late. The lyrics of the former even admit to a sense of obsolescence; “I don’t think I’ve ever felt so out of the margin, I’m too old to fight with machetes and blades/I feel like a leper, like handin’ my cards in, like I don’t have the right to join the parades.”

What exactly is the point of the album? It feels like a catalogue of tics and gestures, meant to approximate the band that crashed through so many barriers. The first group to successfully integrate synthesizers into Rock N’ Roll, the first wed introspective lyrics to powerfully bombastic arrangements. This Who feels like a ghostly apparition of those long-ago innovators. WHO is neither unpleasant or necessary. Whatever this record is aiming for, it misses the mark.