I’m not a fan of movies that are message oriented, but I do like films that are intelligent, meaningful and engaging. Consider here two of the more satisfying films now playing that are substantive, satisfying and immensely entertaining 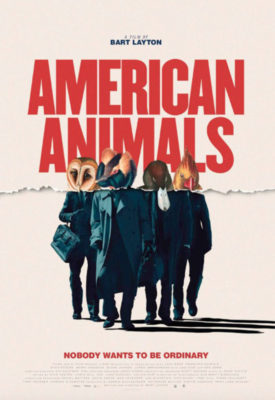 Weighty themes are examined when Spencer Reinhard, Warren Lipka, Eric Borsuk and Chas Allen, four friends who live an ordinary existence in Kentucky, visit Transylvania University. Lipka comes up with a plan to steal the rarest and most valuable books from the school’s library resulting in perhaps the most audacious art heist in history.

With a deft mix of real interviews and recreations the men explore whether their attempts to inject excitement and purpose into their lives are simply misguided attempts at achieving the American dream.

What might have been been just another unbelievable but true crime story morphs into something much more philosophical, compelling and complex in Bart Layton’s brilliant and mesmerizing film. Recommended. 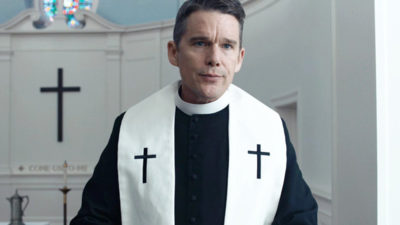 Set in upstate New York, where Reverend Ernst Toller (a terrific Ethan Hawke) pastors a small Dutch Reform church about to celebrate its 250th anniversary. The old, historic building, once a stop on the underground railroad, is now a tourist attraction that still caters to a declining congregation.

Close by is mega Abundant Life parent church with 5,000 members.

When a pregnant parishioner (Amanda Seyfried) asks Toller to counsel her unstable husband, a radical environmentalist, the clergyman finds himself plunged into his own tormented past until he finds redemption in an act of magnificent violence. From writer-director Paul Schrader comes a gripping theological thriller about a crisis of faith that is deeply personal, political, and planetary.

This unsettling portrait of a man in the midst of a spiritual breakdown asks profound moral questions about modern American Christianity and what, if any, purpose it can serve in the world we have inherited. How can we have hope in a world that feels hopeless? The pastor asks will – not can – God forgive us?

This is Schrader’s masterpiece. In truth, it’s the story he was meant to tell and has been working on – one way or another – much of his creative life. Thoughtful, uncompromising, engrossing and supremely relevant. Recommended. 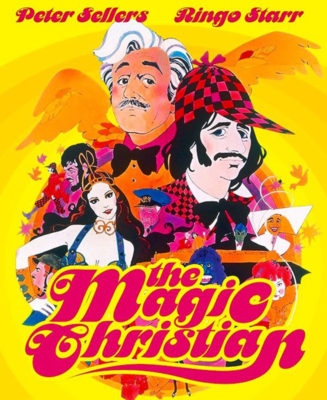 It’s so nice to finally have an anamorphic hi-def transfer of this mostly-forgotten if minor anarchic gem from the Age of Aquarius.

Director Joseph McGrath’s crazy British comedy opens with a homeless man (Ringo Starr) being rudely awakened one morning by a bobby. Sir Guy Grand (Peter Sellers), the world’s richest man watches from his bedroom window and soon adopts the lad christening him Youngman Grand. The pair set off on a quest to determine and illustrate the limits of human greed and book passage on the cruise ship The Magic Christian.

With Sir Grand’s endless stream of money to motivate the greedy: Laurence Harvey combines his Hamlet soliloquy with a striptease, a cop is bribed into eating a parking ticket, a cesspool is seeded with cash and the money-hungry dive right in. 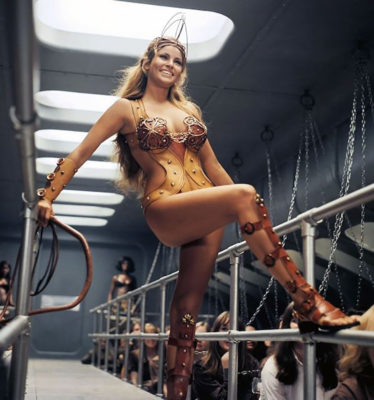 Surprising cameos abound: Wilfred Hyde White is the drunken captain, an uncredited Yul Brynner is a lovely chanteuse; John Cleese is the snob director of Sotheby’s auction house; Roman Polanski, Richard Attenborough and Raquel Welch also appear and if you look very closely you might spot a fleeting John and Yoko in this offbeat comedy. Paul McCartney wrote and produced “Come and Get It,” the first international hit from Badfinger. Sellers, Cleese, Graham Chapman and Terry Southern co-authored the screenplay adapted from Southern’s iconoclastic, capitalist bashing novel. Olive Films. Recommended.