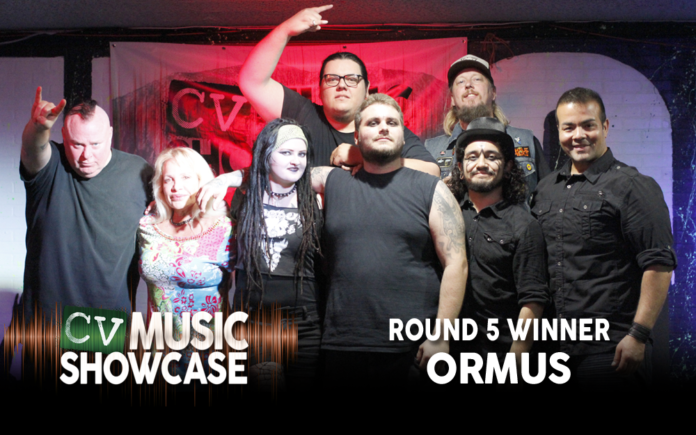 WITH KILL THE RADIO SLIDING INTO THE WILD CARD SLOT

Last Sunday, April 8th, music fans, musicians and supporters gathered at The Hood Bar and Pizza in Palm Desert for the last, nail-biting round of competition leading up to the finals that will be held on Sat, May 12th at the same venue. Brand, spanking new metal band, Ormus will be joining 5 other finalists who have clawed their way to a top spot to compete for a prize package including, $2000 cash (1,000 provided by PSA Organica and 1,000 provided by The Hood Bar), a photoshoot with CVMA nominated photographer, Laura Hunt Little, a song track recorded by Arthur Seay and various other goodies.

The competition was truly fierce and the judges really had their work cut out for them considering the fact that, according to the event coordinators, the scores were closer than they had ever seen in the contest thus far. The stellar panel of judges which included, Jason Hall, owner & founder of Ruined Vibes Record Label and CV Weekly Music Writer; Todd, “T.K.” Killiam (Program Director and On-air personality for 93.7 KCLB), Aaron Ramson (Local metal musician in the band Perishment and CV Weekly columnist) and Julie Montante, owner of PSA Organica, was not to be envied. Everyone who performed brought their A-game and left their hearts on the stage for all to behold. 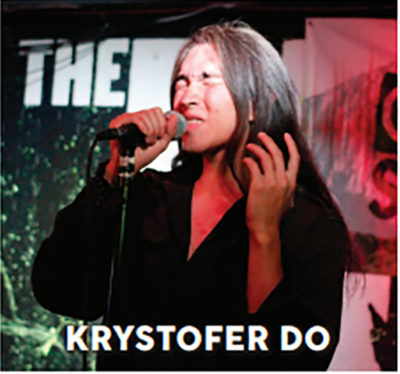 First to compete was, singer/songwriter, Krystofer Do whose R&B, pop and rock styling impressed the judges and attendees alike, and his remarkable voice was even compared to artists such as Michael Jackson, Prince and Freddie Mercury. Do performed his 20 minute set of all original songs while accompanying himself on keyboard and with pre-recorded tracks, which was his unfortunate handicap when going up against complete bands. One of the judges read my mind when stating how much we would love to see Do with a full band behind him. Do mentioned that was the plan that fell through, but is in the works for the future. That possibility has me on the edge of my seat. Check out Krystofer Do online at https://www.youtube.com/watch?v=m2ROIxlbEEM&list=PLkBaXUZ5npiCTanUsRS5SRcOGQU0s-h7h

The second act to perform was the heavy metal/psychedelic/punk trio, Rogue Ogre whose bluesy riffs mixed with various styles are reminiscent of what many of us have come to know over the past few decades as the, “desert rock sound,” which says a lot about their musical integrity. Their Facebook page mentions their genre as, “Desert Doom,” which totally works for me. Band members, Xan Abyss (Vocals/Bass), Donny Browne (Lead Guitar), and Will St. Clair – (Drums/Percussion), made the bold choice of using their 20 minutes to perform one song that lasted the entire length of their time, which if nothing else, showed stamina and a willingness to take risks. The judges praised the soulfulness of the bass and its complement to Xan Abyss’ vocals which get stronger every time I see them perform. Like Rogue Ogre online at https://www.facebook.com/RogueOgre/ https://soundcloud.com/rogueogre

The third band to take the stage was a funky, metal/experimental trio from Mecca in the far-east parts of the valley. Kill the Radio may not have taken the top spot due to what came down to a few measly points, but they so impressed the judges and audience alike that they will be joining the night’s winners and remaining finalists in the showcase finale having been picked as a, “wild-card” in the competition. Band members, Ernie (Drums/Percussion), Sam (Vox/Guitar) and Saul (Bass), displayed top-notch musicianship and out-of-the-box creativity with their seamless genre-switches, kick-ass breakdowns and a couple of triumphant choruses. Check them out on Facebook at, https://www.facebook.com/KillTheRadio760/ and soundcloud, https://soundcloud.com/killtheradio760

Last but not least, the winners of the final, coveted spot, ORMUS, were the true dark horse of possibly the entire competition seeing as they seemingly have come out of nowhere to take their place among an impressive list of talented performers. This being only their 3rd performance as a band ever….nobody, including the band members themselves expected to do particularly well competing, which made their win even sweeter and more exultant. Band members, Martin Posada(Vox), Chaz Marriott (guitar), Serene Tahtinen (bass) and Dave Febra (drums) blew away the audience with an aggressive stage-presence and legit skills that would seem to come from a band that has been doing their thing for years, not months. Their charisma and showmanship was truly crowd-pleasing, yet did not outshine the fact that the music itself is fantastically executed and full of drama. Chaz Marriott/Guitar: “At the risk of sounding cliche’, we really only came into this to have a good time and gain some experience. We never expected this to happen so you can imagine how honored and excited we are.”