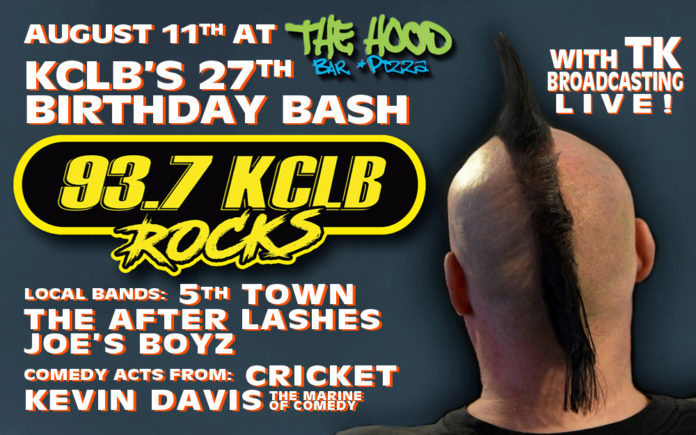 By now, most everyone in the local music scene should know who Program Director for 93.7 KCLB radio station, Todd “TK” Killiam is. He is the man who has worked tirelessly to bring local musicians on the radio for interviews as well as actually playing their tracks on his station. This is no small feat and we applaud and appreciate all he has done for the local music scene. So, let’s all show up this Saturday at The Hood and help him and the station celebrate. TK took some time to answer a few questions for us.

CVW: How long have you been at KCLB?

CVW: I know you came from San Diego. Do you feel like Coachella Valley is home now?

TK: “I feel very at home in the Coachella Valley. It’s very laid back, the people are nice, there’s a lot to do. I love it here.”

CVW: How long have you been in radio?

CVW: Tell us a little about your position at 93.7 and how you came to have the freedom you now have to have so much local content?

TK: “I was originally hired to do the afternoon show. At the time there was a lot to do behind the scenes. I was eager to help and the job list grew into Program/Content Director, Music Director, Afternoon Show Knucklehead, and a million other things. Supporting local music was something I was used to working in the San Diego and Los Angeles radio markets. The local music scene here is amazing. It happened for KCLB organically and grew quickly. Alpha Media is very supportive, they totally get it.”

CVW: What’s your favorite part of supporting the local bands?

TK: “Having them on the air. That’s probably my favorite thing about being on the air right now; the interaction with the local bands and listeners. It’s hard to explain how great it feels. So, I won’t.”

CVW: “You do so many great events partnering with different venues. Tell us about some of your recent shows that are standouts for you?

TK: “The one that stands out is the Billy Madison Show ‘Billy and Nard Kickback’ at Dringk Eatery + Bar. Billy and Nard had so much fun with the KCLB listeners! I have never seen a radio show connect so deeply with their audience like that, an amazing night. I’ve been honored to host the CV Music Awards twice. Acoustic Palooza at Big Rock Pub was a huge stand out this year. The grand prize-winning bands/artists were Giselle Woo and Mega Sun. And of course, where it all started with our journey supporting local artists, The Hood Palm Desert. This year our 27th Birthday Bash goes down at The Hood Bar and Pizza on August 11th, with local bands, The After Lashes, 5th Town, and Joe’s Boyz performing and Comedy from Cricket and Kevin Davis ‘The Marine of Comedy.’ 93.7 KCLB will be Live on-air from 8pm to 10pm giving out KCLB prizes every 10 to 15 minutes during the broadcast. It’s all ages until 10pm and it’s a FREE show.”

CVW: What major music/bands are you listening to right now?

TK: “Literally just listened to Joe’s Boyz getting ready for The Hood KCLB Birthday Bash. I am a fan every local band here, except for one… my band Scrotum Pole. I say it like a broken record, there’s SO MUCH talent in the desert, I’m proud to be part of this music scene.”

TK: “That’s a good question with a twist. I’ve bumped into a show that truly inspires my inner radio nerd. It’s The Billy Madison Show mornings on KCLB. It’s a truly unique show on and off the air. Billy, Derek, Nard, Felix, and Chris are super solid guys and crazy talented. It’s so fun working with them daily.”

CVW: How do you feel the CV Music scene in the CV differs from San Diego or other towns you’ve lived/worked in?

TK: “I like this scene most, it’s the people. Bands support each other and help each other here. I haven’t seen anything quite like it on my radio travels.”

TK: “I can tell you who it wouldn’t be… Beyoncé, Eminem, and The Weeknd. Let’s take it back to the days, Radiohead, Chili Peppers, AC/DC, Muse, Jack White, Killers, NIN, there’s a ton more, I’ll stop.”

TK: “Stones, Zeppelin, Aerosmith, Queen (I know), and The Sex Pistols or Iggy Pop or both.”

CVW: What would people be the most surprised to know about TK?