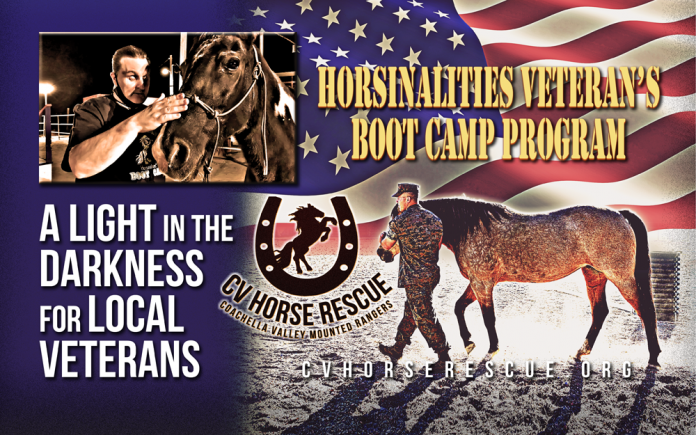 “When my sister found me, I was still coherent.” Daryn LaVoie, US Army veteran who served in Desert Storm from 1993-1997 had not coped well with the loss of his father that year. The anguish combined with the grips of PTSD were often more than he wanted to bear, but this night would be darker than all the others. He was a God-fearing man, and this was not something he was in the habit of doing, but he brought home a bottle of vodka and began to drink it straight. “I hadn’t drunk like that in about ten years. I went to go to bed, and I grabbed my 38 out of a lock box; I was somehow actually able to dial the code, got my gun, took into my room, and went to bed.” 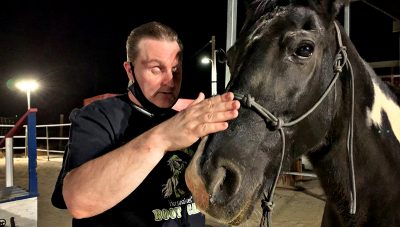 “I wasn’t planning on it.  I remember buying the bottle and going home with it. I remember drinking the entire bottle. The next thing I remember was when my sister found me.  I told her, ‘I didn’t do it, I didn’t do it.’  She was on the phone with my mom and my mom told her to look and see if I had my weapon on me. She hadn’t turned my bedroom light on, but from the light coming in from the living room through the bedroom door, she could see my right hand was covered in blood, and I had my gun in it. I had apparently fired one shot. She said, ‘Oh my God, he shot himself in the head. I have to call 911!’ She took the gun from my hand.  When the police showed up with the ambulance, they looked me over and asked where the weapon was. She told them she had put it in the kitchen sink and that she had rinsed it off.  They said, ‘Ma’am, this now looks like a crime scene. We’re going to need to check your hands for gun residue; it looks like you shot him.’  They wouldn’t let her back in the house until they had taken me away.”

LaVoie was rushed to Desert Regional Hospital suffering from life threatening blood loss.  He died on the table twice. Thanks to the EMTs, the skilled medical staff that received him, and 8 pints of blood, he survived. The bullet that had traveled clean through his temples, however, and had severed the optic nerves in both eyes.  He had lost all eyesight. He was released from Desert Regional eight hours later with a medical bill of $33,333.33. 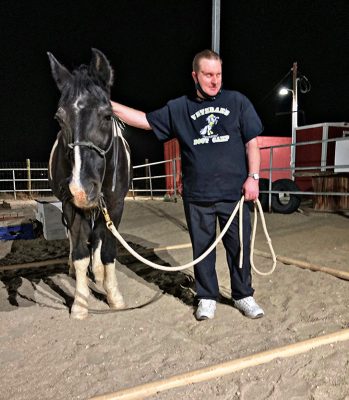 Further examination and treatment at University Medical Center revealed that his eyes had begun to die and would need to be replaced with acrylic implants. “My mom had to sign away my eyes,” he said, with heaviness of heart, not only for the loss of his eyes, but for his mother having to go through this. It took me a while to accept that I couldn’t see. I really believed that if they just took me outside of the hospital and into the light of day, I would be able to see.”  He spent the next two years in the hospital learning to accept the truth and adjusting his condition.

There are programs available to the veterans with disabilities, but LaVoie hadn’t participated in any. When Ed Robles at the Palm Desert Veterans Administration told him about the Coachella Valley Horse Rescue’s veterans’ program, he jumped at the chance. “I wanted to get back out again. I was ready. I wanted to live again. It’s very nice to be around people again, to get out and interact.”

LaVoie has been coming to the Coachella Valley Horse Rescue ranch every Monday for a month, joining several other veterans. He is working with Riley, a 28-year-old Missouri Fox Trotter. Riley has a lot of experience as a program horse, but this has been the first time Riley’s worked with someone who is blind. “They have a magical connection,” shares Annette Garcia, CV Horse Rescue’s Rescue Program Director. “It’s as though Riley knows that Daryn can’t see him, and he accommodates Daryn differently than the other veterans. It’s an amazing thing to watch.” 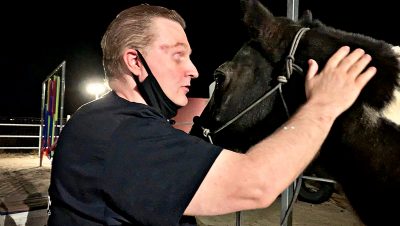 “Our connection is very fluid,” says LaVoie. “We bonded very well. Riley follows right behind me and has been like a seeing eye horse for me.  I learned very early on that I didn’t have to force him to do anything. He wants to walk with me. Sean (another veteran who has been instrumental in developing the program and is mentoring LaVoie) was teaching me to watch out for Riley’s face and jaw bone (a significantly strong part of any horse that can cause accidental injury). But Riley wanted to be close to my chest right away. He follows right behind me and even gently bumps into me because he wants to be close to me. I used to work on a horse ranch 10-15 years ago, and this is a nice way to reconnect with horses again, but this has been a phenomenal experience.”

LaVoie’s mother drives him to the ranch, and sits in with him and the rest of the veterans. There are very few Mondays that don’t bring a tear of joy to her eyes, or the eyes of the other veterans. A lot of healing has been taking place in a short time, but LaVoie knows there is still a lot of work to do. “I’ve heard a lot of people who have had near death experiences say that ever since, every day is a new day for them. I don’t wake up every day happy to be alive. I have to talk to God and say, ‘I’m not as happy as I should be today, because I’m down in the dumps right now. Help me find out why and how to get out of it.’ I wish I could say that every day I wake up I’m happy to be here, but the truth is I’m not.  Most days I am, but not always. I pray every day that I’ll be able to have a surgery that will make me see again.  I keep being told that the eyes are too difficult to do surgery on, but I know that it’s got to be possible. I don’t push Jesus on anyone, but I know I’m here because of two people – God and His Son.”

LaVoie is now on a mission to bring his message to as many other veterans as he can.  The high risk of suicide among veterans is widely known, and as LaVoie puts it, “I almost became one of ‘those’ veterans.” Now he wants to turn his tragedy into a life-saving message encouraging veterans to reach out and get the help they need. “Killing yourself is not the answer to your problems.  Instead it creates more problems. It’s like the ripple effect of a boulder tossed into water.  Come out to the CV Horse Rescue and try it.  Even if you’re a recluse and don’t want to interact with people, interact with a horse. It’s a great experience.”

For more info go to: www.cvhorserescue.org