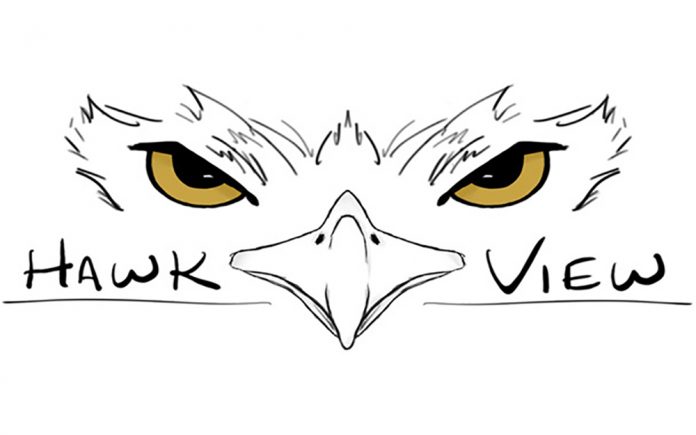 2020 has been a year of historical proportions. Between politics and a pandemic, millions of eyes have been glued to screens and articles to see what new developments come to pass. Recent news content has also paved the path for how journalism is taught in schools for future generations of historians. Jennifer Cortez is an English instructor and journalism advisor at La Quinta High School, where she is not only adapting to distance learning, but also getting her students involved in reporting current events.

Cortez is going into her third year teaching at La Quinta High School, after a brief hiatus to get her master’s degree in journalism. Cortez is also a 2009 alumna of the high school, where she was part of the Hawkview staff throughout the years before graduating—coming full circle as the current faculty advisor.

The Hawkview launched a digital version of their newspaper in the 2017-2018 school year, replacing the physical version of the publication this pandemic season, since the Desert Sun had previously printed past issues and has now moved the printing headquarters to Arizona.

“Instead of focusing on deadlines and getting a publication out on time, right now I am prioritizing teaching my students what is important in journalism today. What we are focusing on is how we can engage with our community, especially when we are so disconnected from each other physically. We are experimenting with the way we tell stories,” explained Cortez.

Before the pandemic, students were able to familiarize themselves with Mac computers, camera equipment, and other journalistic tools essential for hands-on learning. But since school campuses are closed, students have limited access to these resources and have to rely on Zoom to conduct interviews. A notable way that students have engaged with the community through video interviews includes interviewing the Trustee Area 3 Desert Sands Unified School District candidates on their website. Hawkview staff members Miranda Muir and Layla Freiberg interviewed Celeste Fiehler, Doug Hassett, and Patricia Pearce about their aspirations and plans to reopen schools.

The Hawkview also has plans to relaunch their Humans of La Quinta High project, which is a photojournalism collection on Instagram (@humansoflqhs) that “aims to cultivate empathy with the Blackhawk community” by posting photos of staff and students with personal quotations about themselves.

“So many of my students have expressed interest in wanting to write about how the pandemic has affected their community, or the Black Lives Matter movement that reignited during the summer. This allows students to be more engaged with current events and create more empathy with these stories. And for Humans of LQHS, not everyone knows what goes on behind the scenes of someone’s life. This project develops more of an understanding between faculty and students,” stated Cortez.

The Hawkview staff has also been accepted as one of only five finalists in the annual Goldfish Bowl event held at Desert Sands Unified School District. This competition is inspired by the show Shark Tank, and enables students and staff to pitch their ideas for educational endeavors and receive funding to carry out their pitches. The Hawkview staff pitched their idea of installing vinyl banners at the perimeter of the high school to promote unity during the pandemic, centered on the theme of “What is a message you would like to deliver to your future self?”

“Now more than ever, the idea of media as being distrustful has become more prevalent. Having students involved in journalism means they are engaging and interacting with their community. Instead of hearing about the news, they are taking part in it. Being a high school journalist lets students focus on something outside of themselves and contribute to something greater, allowing them to learn the value of empathizing and identifying with other people,” said Cortez.