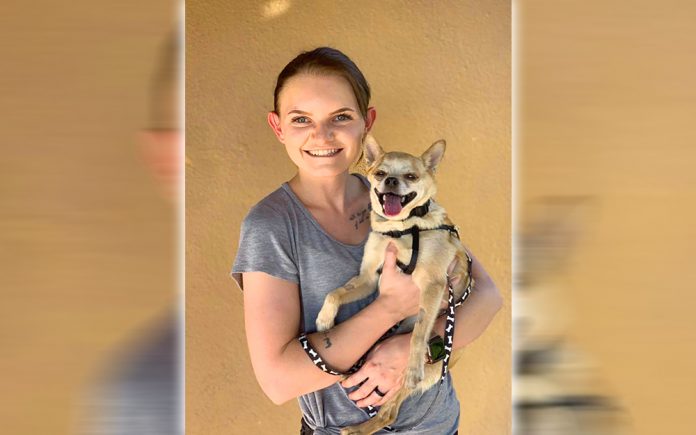 The little tan Chihuahua came in as a stray to the Desert Hot Springs Animal Care Center.  He was a friendly fellow, but no owner came searching for him.  Deemed to be about 8 years of age, this Chihuahua boy was not the pet sought after by most Coachella Valley adopters.  Overbred and unfairly stereotyped, Chihuahuas are the 2nd largest group (after pit bulls) in America’s public shelters, and the 2nd largest group euthanized. 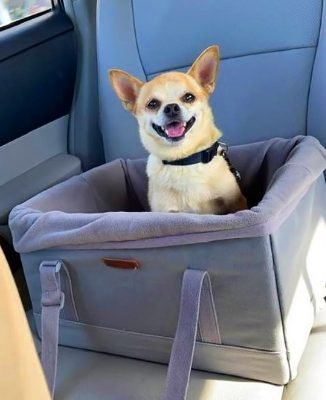 The shelter contacted Tracy Habijanac at Loving All Animals who arranged for him to enter their rescue and adoption program.  They called him Cisco Kid, named after the “Robin Hood” type hero in the 1960’s television Western series.  A quiet and sweet pup who liked people, his behavior became more elevated when people approached his kennel.  He also squealed when picked up, arousing suspicion of an underlying medical condition.

A vet appointment was quickly arranged, and radiographs revealed disc disease could be causing pain and discomfort for the pup.  He was also diagnosed with a grade 3/6 heart murmur.  The Cisco kid would need to be on medication for the rest of his life.

The consensus was there would probably be a long wait for a forever home.  Who would want to make this little fellow part of their family, given his breed, age, and medical issues?  He proved to be a dear little pup who got along with other dogs, but his greatest joy was being with people. When in the outside yard with other dogs, he would stand by the fence barking and pleading to come inside with the people.  Meanwhile, calls poured in to the Loving All Animals office from folks seeking young fluffy breed dogs such as Maltese and Poodle blends.

Enter Morgan and Douglas Lawrence, a young couple stationed at the Twenty Nine Palms Marine base.  They were in the market for a small dog as their large dog Loki loved the small size companions.  Morgan read the Cisco Kid’s story on the website which included the dog’s medical issues.  She knew right away he was their dog.  Morgan grew up in a dog loving family that adopted dogs that no one else wanted, sometimes taking in abandoned neighborhood strays.  She explains, “Everyone who goes to a shelter seems to want the perfect pet, and the ones with any issues get left behind.  I love to adopt those dogs, including those who had a bad past, and give them a loving home.”

His big smile on his October 20th adoption day foretold the wonderful life ahead. His name is now Eitre, the Marvel Weapon Master, portrayed by small sized actor Peter Dinklage.  He is truly a little hero, battling the obstacles to celebrate victory in the end.

Eitre was a happy traveler on the trip home.  Car rides are one of his favorite thing, and his family purchased a special car seat for him to travel safely.  His big brother dog Loki was thrilled when he arrived; Eitre was not so sure about Loki, but has gradually consented to hanging out together.  Morgan reports, “Eitre is like a happy puppy now.  He doesn’t show any physical sensitivity these days.  He jumps up on the bed to sleep by my side.  We found out he loves children.  He greeted them at the door in a costume on Halloween, and wagged his tail when each trick or treater arrived.”  Eitre is also completely house trained, barking by the front door when he need to go out. Thriving in his new home, he is a lovely companion for Loki and his humans.

When you survey the dogs at a shelter (online these days!) take a second look at the older pups and ones with special needs.  It takes a bigger heart on the part of us humans to give them the second chance they deserve.  Loving All Animals takes in many dogs that have little or no vetting, some are seniors, and others have complex medical situations.  Please consider donating to help with the extra expense required to ready these dogs for adoption.  You can donate online at www.lovingallanimals.org, and you can designate “vet care” as the reason for your donation.

Thanks to all who foster, adopt, and donate to give special pups like Eitre a second chance!