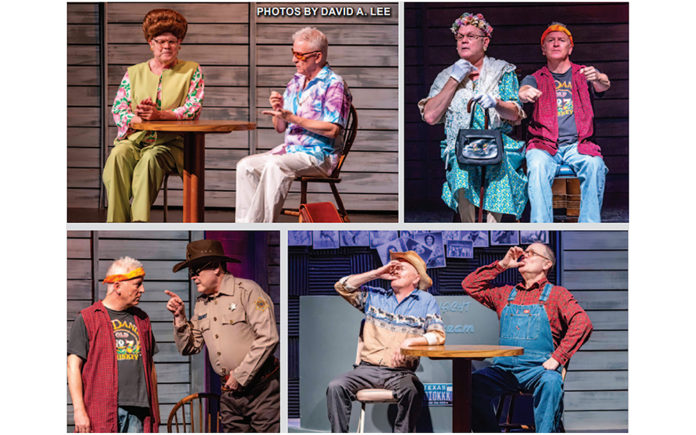 I believe that life should always be filled with gifts of pleasant surprises.  I wasn’t sure what to expect from a play titled, “Greater Tuna.”  I don’t like to research a show before I see it so that I can go into the theatre without preconceived ideas, but for obvious reasons, with this title, the subject of fish came to mind. I was thrilled to find out there was not a fish in sight, but there was some hilariously funny, laugh out loud witty repertoire and great character performances.

Greater Tuna, written by Jaston Williams, Joe Sears and Ed Howard, was first produced in 1981 and currently presented by Coyote Stageworks at the Annenberg Theatre.  This is the first of a series of four plays, followed by A Tuna Christmas, Red, White and Tuna, and Tuna does Vegas. The show received a Tony nomination, an HBO special and even gave a White House presentation during the Bush Sr. era. The website claims that it is the most produced show in America and I wouldn’t doubt that for a minute.  It’s a simple production with a hilariously witty and outrageously funny script.

The title refers to a fictional town called, Tuna Texas, set in the late 1970’s and depicts the lives of the small town Tuna residents, male and female, all performed by two very skilled and professional actors, Alan Denny and Chuck Yates.

At rise we find good ole’ boys, Wheelis and Struvie, local news announcers for OKKK radio, reporting the headline news for the Greater Tuna area.  Like sweet molasses in the summer time, Denny and Yates, proceed to slip in and out of costumes and characters with the greatest of ease as they introduce us to twenty unique, offensive, politically incorrect, entertaining and spot on funny southern characters that will have you laughing out loud with every other line.  I appreciated that the show tackled some very important topics in the midst of the satire. Poignant and well written humor almost always works in conveying information.  Small minded social and political commentary on the topics of religious zealotry, racism and gun violence are not always met with open minds. The absurdity of these characters and many of their views is obvious. And especially in today’s political climate, finding humor is difficult.  But this show makes fun of itself. And sometimes laughing at blatantly absurd views is just a necessary relief.

Denny and Yates are so perfectly cast for this two-man show.  They are talented enough to move between a myriad of diverse characters without missing a beat.  And both men seem to know exactly how to effortlessly hit the funny bone.  I love to laugh if it’s smart humor and I can honestly say my sides were hurting when I left the theatre.

Larry Raben, directed this witty comedy and is to be applauded for the seamless staging and cohesion of the scenes and actors whose multitude of entrances and exits were as smooth as silk and fast paced. I really appreciated the simplicity and functionality of Josh Clabaugh’s set design.  Jim Lapidus and Frank Cazares merged their talents to create some iconic and spot on costumes for this myriad of characters.

If you’re looking for a night of just fun and escape, Greater Tuna is the show to see.

Greater Tuna can be seen through March 31, 2019 at The Annenberg Theatre, located at 101 Museum Dr, Palm Springs.