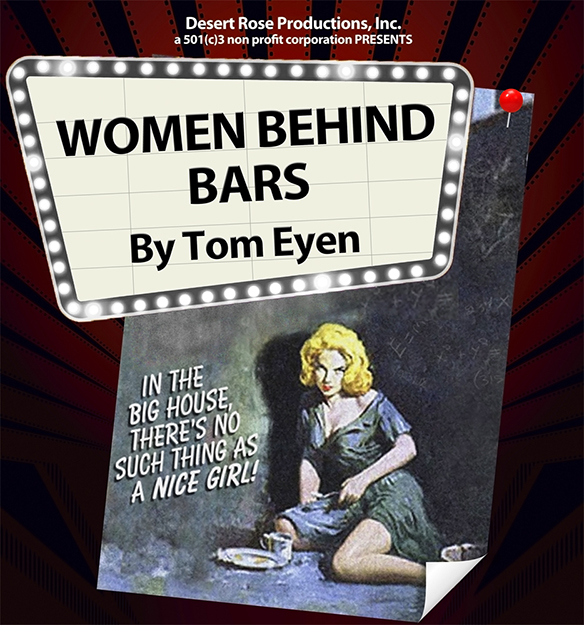 The 1950’s was fraught with melodramatic women in prison films.  From “Caged,” to   “So Young, So Bad,” the film noir incarcerated bad girl, was the plot for many Hollywood films during the decade that gave birth to Rock and Roll and the Cold War.

In 1975, Playwright Tom Eyen wrote his campy ode to these black and white low budget b-movies, with his cult classic, “Women Behind Bars,” a play that is about as far removed from his Tony Award winning show, “Dream Girls,” as you would imagine given the dichotomy of these two titles.

Women Behind Bars, is a black comedy set in a Women’s House of Detention in Greenwich Village.  It’s an obvious satirical take on the God-Mother of women in prison films, “Caged.”  It’s the 1950’s, and a young, innocent, Mary Eleanor, Phylicia Mason, is thrown in prison to serve out an 8 year sentence after being framed by her husband for a robbery she didn’t commit and eventually becoming a hardened criminal herself.  Not usually the stuff that comedies are made of.  But this cast of characters are so delightfully stereotypical and over the top, that it’s near impossible not to laugh out loud at the absurdity and humor of their predicament.

Mary Eleanor, is taken under the wing of chain smoking, hair pilled high, tough girl, Gloria, portrayed by the ever brilliant, Yo Younger.  Younger has the skills to morph into any character she portrays and kick-ass Gloria is no exception.  She’s got a lifetime ahead of her in prison and nothing to loose.  Francesca Amari is Ada, the hysterical pyromaniac, with butterfly wings on her back and the ever-ready bic lighter. She is a woman who should be in a psych ward, but instead is in prison for attempting suicide… and trying to take both of her parents with her.   I’m an Amari fan, she is just so much fun and kept me laughing anytime she flicked her bic and flew into action.  Adina Lawson as Granny, the matriarch of the bunch, is another desert treasure that can more than hold up her end of any show she’s a part of. Her dual role was both surprising and delightful.

Deb Harmon, a gifted actor and director, reprised her role as Blanch, the Southern Belle inspired by Tennessee William’s, Blanch Dubois. Harmon originally performed this role in the Los Angeles production of Women Behind Bars and it was a real treat to see her on stage for this production.  Melanie Blue as Guadalupe, Kimberly Cole as JoJo and Kam Sisco as Cheri, rounded out this very funny and extremely talented ensemble of inmates.  Each unique and shining in their role.

Loren Freeman, as the Joan Crawford inspired Prison Matron, was wonderful.  I could almost hear her screaming, “No wire hangers, ever.”  And her sidekick, Louise (Ruth Braun) provided a perfectly wicked balance for this duo. Miguel Arballo was smooth as silk slipping between his many roles as the only ‘real man’ in the show.

Toni Molano’s wigs deserve huge accolades for perfect character depiction. Before even a line of dialogue was uttered, the hair was telling you who each of these women were.   And Jennifer Stowe’s costumes were perfect in their representation of monolithic prison garb that was uniquely fitted each role.

Jim Strait and Robbie Wayne successfully joined forces on the direction of this final show of the season as Strait, and Cofounder Paul Taylor head into retirement and hand the reigns of the Desert Rose Playhouse over to Wayne.

There is brief (complete) male frontal nudity in this show, simulated sexual assault and racist rhetoric that is a bit unnerving for a contemporary audience, but appropriate for the time and setting. This show is not recommended for all ages or sensibilities, but the laughter begins upon first setting foot in the theatre and seeing the hysterically funny mug shots of the cast up on the wall.  It’s easy to see that everyone is having a blast on the stage and if you’re looking for some campy, easy going fun, then “Women Behind Bars,” is the show to see.