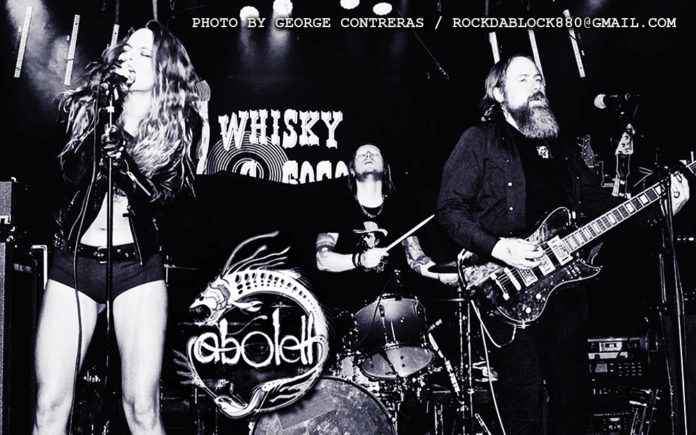 In Dungeons & Dragons ‘aboleths’ are some of the most primeval beings in existence. They are a fictitious race of malevolent, eel-like abnormalities with paranormal abilities. After listening intently to their Ep-I Single which includes the varying tunes, “No Good,” “Corpsehunter” and “Captain Cheese,” their sound is beyond their years and parallel’s the aboleth characterization. I hear southern slide blues, a lot of fuzz, a strong drum presence, and soaring vocals over the top of the tuned down guitars. It’s the perfect melding of heavy music and tragic melodic vocals that bring the synthesis of the rasp of Janis Joplin and ‘Metal God’ Ronnie James Dio to mind.

Based out of Los Angeles, the aberration that is Aboleth is epic fuzz, stoner doom metal from the high California desert

Coachella Valley Weekly had the opportunity to speak with the band prior to show time.

CVW: What should people who have never witnessed Aboleth live expect to see?

CVW: Do you have any connections to the desert other than Arty Love?

A: “We recorded our debut EP in Yucca Valley with Dan Joeright (Earth Moon Earth) at Gatos Trail Studios and filmed our first music video in Reefer City (yes, it’s a real place). Dan was also our original drummer. We might be L.A. kids but the desert has always informed our sound. Our eventual goal is to build a recording studio/art compound in the high-desert for our no-shoes-wearing, Vespa-riding devil cult.”

A: “There are musicians everywhere, from all over the place, so it’s a great city to start new projects and stumble upon band mates that perfectly click with you. It’s also a culturally diverse city, and people are fairly open-minded.”

CVW: What can you do without?

A: “The infamously terrible music scene. You can find the perfect band mates but still end up playing for ten people on a good night because hardly anyone goes to shows anymore. Literally anywhere outside of L.A. is already a whole other world for playing live.”

CVW: Where can we find more info and what’s next for Aboleth?

A: “You can find us predominantly on Instagram @abolethband, and we’re also on Facebook and Twitter. Our music and merch are available on Bandcamp and we’re on Youtube and Spotify as well. We just wrapped up recording our debut full length album with our label WURMgroup, which is coming out in Spring of 2018.