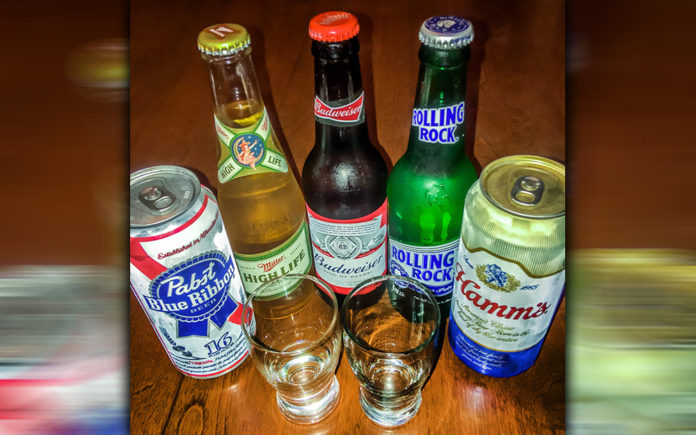 Back in my day as bassist for LA deathcore band Crematorium, we’d tour the country for months at a time, living and commuting in an old 15-passenger van and trailer (Can you imagine that? Five dudes, one van, all the farts). We’d signed a three-album recording contract, but the touring life is rough for all but the most established of bands. Showers were few and far between, we ate fast food daily, and we drank cheap beer as supplied by the venues or when purchased at truck stops. Our diet was poor and the beer buzz was poorer; dollar menus and $7 twelve-packs fueled our daily life.

Over a decade later, I’m a craft beer brewer instead of a struggling metal artist. Call me nostalgic, but I’ve still got a taste for cheap American lager. I grew up on the stuff! It’s high time I review what is, at this point, part of my DNA. Ladies and gentlemen, here are the least worst beers ever.

My girlfriend Courtney, joined me for the tasting, and immediately declared, “Woof, that’s bad. This tastes like Wonder Bread. Artificial ingredients and everything.”  At first this beer tasted flavorless; the vapid cleanness that Miller happily declares The Champagne of Beers. Then, an awful metallic flavor began to creep in at the backend of the palate. This beer is bad, and only gets worse as it warms. I’ve gotten wasted on real champagne before, but there’s not enough sorrow in the world to get me plastered from this swill. Swipe left on this one. 2/5 stars

“Smells like apples,” Courtney muttered with the bottle almost in her nostril. And she’s right; Rolling Rock is famous for the taste of DMS in its flavor; a brewing flaw that’s reminiscent of green apples. Rolling Rock has owned it, and made that flaw into its signature flavor. Tart, dry, and slightly bland, this is a common beer for bands to drink in green rooms around the country. This was a trip down memory lane to many pleasant, former hangovers. 2.5/5 stars

With its .1% higher ABV and more assertive flavor profile, Hamm’s wants you to know you’re actually drinking something. I mean, I tasted something that resembles hops with this beer. With a bready malt profile that tastes more like crusty sourdough than Wonder Bread, Hamm’s is at the top of the leader board for least crappy American lager. 3.5/5 stars

Palm Desert dive bar “The Hood” opened doors with their notorious “$1 PBR nite”, as many cheap dive bars across the country have done, and it paid off in dividends. The beer of choice for hipsters, working slobs, and poor musicians world over (I’m all three, what-what), this is the beer most often associated with millennial nostalgia. Lightly grainy with saltine cracker flavors, there is so little going on with this beer as to be inoffensive. There’s nothing to dislike or stand-out about this beer, and that’s probably a lot to do with its popularity. 3.5/5

Back in my day, if you played a music club and they gave you Budweiser, that meant you fan-saayyy. This is not necessarily cheap beer, but according to who you ask, it might be bad beer. A friend to gardeners and an enemy to beer-snobs world over, Bud is a divisive beer despite its perennial popularity. I personally have not drunk a Budweiser in over a decade, and was pleasantly surprised. Cooked white rice dominates the palate; starchy, clean, and mild. There is just a whisper of hops, but the 5% ABV gives it a bigger body than most wimpy American lagers. Available at every gas station and dive bar nationwide, Budweiser remains the Starbucks of beer. 3.5/5 stars 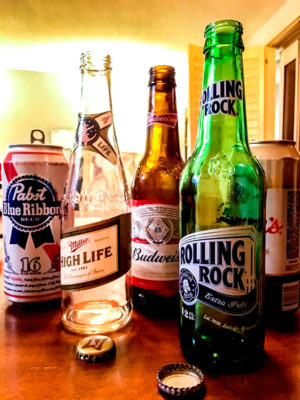 Although Hamm’s won the night as the least worst of the bunch, the ubiquity of Budweiser gives it the win on a technicality. Beer drinkers don’t turn to American Lager because they’re craving a transcendental experience; hell nah! They want to play beer pong with suds they can afford! Budweiser ultimately keeps its crown as the “King of Beers” in this shoot-out. Join me next week, when I wreck my liver once again to discover the best Mexican lagers on the market.