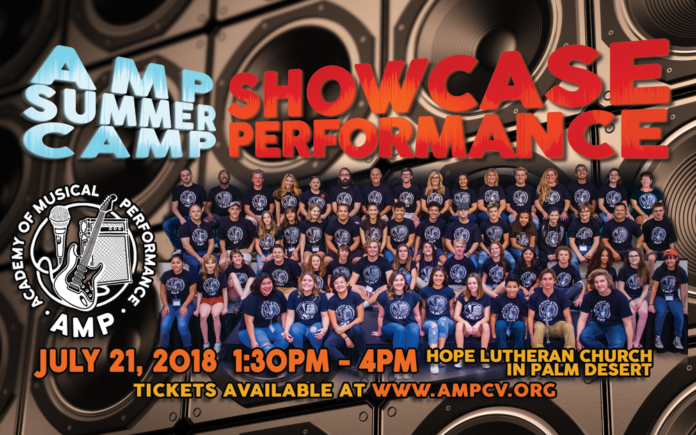 The Academy of Musical Performance, AMP, is a music education program where young, budding musicians have the chance to be in a rock band (in fact, several throughout the course of the camp) to develop and hone their skills – whether that be on guitar, bass, vocals, drums, or keyboard. This summer’s AMP Camp, held from June 25 to July 20, culminates in a final showcase where these talented kids show how they’ve grown and give you a glimpse into the immense talent Coachella Valley kids have and how this program cultivates it.

I visited the AMP headquarters at Hope Lutheran Church in Palm Desert and talked with Will Sturgeon. Aside from being a talented songwriter and musician for popular local band, brightener, Will is also Executive Director of AMP. In 2016, brightener played at Week 1 of Coachella (and Will accompanied The Flusters on keyboard on the same stage for Week 2). Of his position at AMP, Will says, “It’s a dream job for me. I grew up here in the desert and I’m particularly passionate about the Coachella Valley music scene. I love that with AMP, I get to help create a community and space for students to meet other young musicians from other schools around the valley. They have a space to write music and play and connect with the type of music they’re interested in. This program helps create lifelong music learners. These kids can connect with the type of music they love, growing our music community in the Coachella Valley. Indio is the City of Festivals and this valley is an entertainment hub. Helping form these musicians boosts the current and future music scene. AMP bands are all playing way more events than my band is playing! That’s a great thing moving forward and fantastic thing for these kids in terms of music and social skills. With this program, teens (and pre-teens) are placed in a group of teenagers of peers who are all motivated to write and perform. They learn about group dynamics and how to compromise, lead and how to speak to people and get what you want. I’ve seen these students totally come into themselves and want this to be a place where they can express themselves and be themselves. And I think we’re doing pretty well.”

The AMP kids are in agreement. Jake Sonderman, a 15-year-old student who has attended AMP for four years, says, “AMP has completely evolved especially thanks to Will. The first year he was an intern. Then he took over with co-director and has been a huge part of AMP becoming what it is today. It’s constantly changing for the better. We’ve tried a lot of things to see if they work. They’re open to anything.”

Riana Albert, 15-year-old Palm Desert High School student and AMP camp attendee, adds, “Will is amazing! He’s always so relaxed and he opens people up by listening to everyone and supporting them.”

Since its conception, AMP has grown in leaps and bounds. “I have a Master’s in Music Education, but this type of contemporary music education is a very new field and there’s not a lot of precedence. We developed from the ground up. There’s been a lot of tweaking and learning what works and what doesn’t,” says Will. He notes that the core aspect has stayed the same and that is the band ensemble, where the kids get the most out of the program. In group lessons, they hold creative workshops and creative challenges into writing songs. “That’s hard to do as a teenager but they don’t know that because we didn’t tell them that. These kids are already more talented than I am,” Will humbly tells me.

The first year of AMP there were thirty students and this year there are forty. The AMP staff and board want to be able to grow enough to accommodate more students. One of their limitations, Will tells me, is that to build healthy bands they need to accept certain ratios of students so that each band has a drummer, a bassist, 2 guitarists, one on keyboard and two vocalists, creating a large small band. So if they only have five drummers, they can’t have any more than five bands. (This year they have six bands.)

AMP has had incredible impact on the kids who have attended. Jake Sonderman tells me, “As a musician, it’s really helped me. When you’re in AMP, you have to think about the song as a whole and what your place is in the song. It’s helped me become more of a leader. Camp teaches you leadership beyond anything I’ve ever done.” First-time AMP student Riana Albert shares his sentiments, “I love it! Music has been a part of my life for a really long time, so to be able to express myself around people who feel the same I do about music has been great. I’ve definitely grown as a musician; in my music performance and confidence wise…everything.”

This coming year, they have another challenge – funding. For the first year, Goldenvoice will no longer be their major donor and AMP will move into their next phase, complete with finding new funding. AMP is a nonprofit and as such, there is no cost involved to families whose children attend. “We’re always trying to grow,” said Will. “Our goal is to engage our community to raise the money to continue to grow.”

Parent of longtime AMP attendee, Noah, Camille Arujo says, “We have a very supportive community, Goldenvoice sponsoring us was wonderful because they are such a huge name so it made getting sponsors easier for us. They did what they promised they’d do and we are so grateful. The community has already embraced us. Finding that support and money we need to sustain ourselves is going to be easy.” Jake Sonderman chimes in, “In the past year we’ve been more active in the community than AMP has ever been over the last three years and we’ve done more fundraisers. We can carry ourselves now. It was great to have Goldenvoice, but we’re ready to support ourselves now through fundraising.”

Their final showcase, on Saturday, July 21 serves as a fundraiser. At this showcase, six bands will play three or four songs, combining both original music and some of their favorite cover songs. They will be selling pizza and candy and water. People have the opportunity to donate more money and participate in raffles in between sets. Parents and students will speak on impact of camp. Attendees can purchase AMP t-shirts and merchandise. 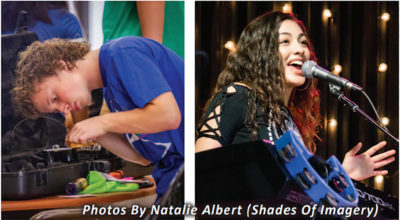 Jake excitedly told me that this is going to be their best showcase yet. “It’s going to be really good. Better than all the other ones. They’re really encouraging us to go all out. These last performances have built up to this huge amazing showcase of everything we’ve done.” AMP mom Camille is looking forward to seeing what the kids have put together this Saturday. “I’m extremely excited. We have taken the performance aspect of our academy into more of the spotlight in our showcase so I’m excited to see what these kids come up with not just musically but in their performance.”

Come support these talented Coachella Valley budding musicians this Saturday, July 21 at 1:30 pm at the Hope Center in the Hope Lutheran Church at 45900 Portola in Palm Desert. Tickets are only $5 online and can be purchased on their website, https://ampcv.org/, or $10 at the door. Pizza, candy, and water will be available for purchase.