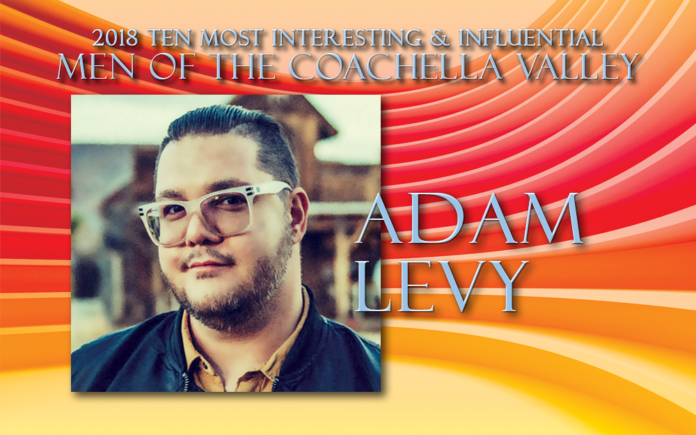 Adam Levy is outgoing, gregarious and spontaneous in nature. These traits are necessary as Marketing Director of Hotel Zoso in Palm Springs. With his Bachelor’s Degree from California State University San Bernardino with a Major in Management and Minor in Finance, Adam has brought some unique entertainment and events to the Palm Springs hotspot. Adam also holds two Associate Degrees from College of the Desert in Liberal Arts and Accounting. Despite the recent change in branding, things at Hotel Zoso are business as usual according to Adam. “We are a tight knit group and are close with each other. The transition from Hard Rock to Hotel Zoso has only made us closer.” 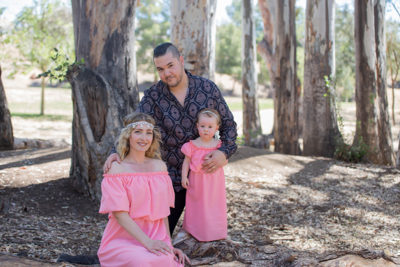 Born and raised in the Coachella Valley, Adam had a wonderful upbringing strewn with solid family values. Adam explains, “I’m a native ‘Palm Springsian’. I was raised by a loving and worldly mother Liz (now a retired Special Education Teacher) who enabled my creativity while pushing me to be realistic about goals. My father Leon is from Rhodes Island in Greece raised in Boyle Heights, Los Angeles and was an all-star football player and accomplished blues musician in his time. My dad prioritized sports, music, and religion in our household. I have an awesome younger brother Matt who’s always been my right-hand man and an overachieving older sister Jenny who consistently set the bar for us to follow. My mom’s family tree is a sprawling orchard with countless relatives all over the globe, where my dad’s family all sadly vanished in the Holocaust. On holidays our house was like Grand Central Station with a revolving door full of family, laughter, singing, cooking, traditions, and rad memories. I’m very close with my entire family, especially my uncle Mike, who not only is one of my role-models but also our patriarch. We all genuinely share an unconditional love for one another and honor our long-lasting family crest inscribed motto, ‘Family Over All.’” The saying conveys Adam’s love for his family.

Adam’s family is what grounds him and provides him inspiration. “My wife Erin and one year old daughter Lena are my pride and joy. My wife is an elementary school teacher at Cielo Vista Charter who has, what I call, a ‘warrior spirit’. Once she sets a goal, nothing stands in her way until it’s accomplished. She’s the type who would crawl through the finish line if it meant finishing the race. She is the most determined, intelligent, detailed, passionate and beautiful woman I’ve ever met. She gets this vigor for life from her awe-inspiring parents, Patty and Dan. Married for decades they are an incredibly loving and driven duo who sincerely enjoy talking with each other and express love through actions not just words or materialism. When I’m not with family I enjoy hanging with my large inner circle of friends, most of whom I’ve known since preschool and elementary school.” Adam has actively developed a formula for success in life.

Adam’s path is on a trajectory towards continued achievement. “I feel my career has just begun. But, I’m fairly confident that I’ll feel this same way until the day I retire. I’m constantly reinventing myself to stay ahead of the curve and always pushing myself to learn more. How I got to where I am now proves that there is no specific route to get to one’s destination, instead, it’s a journey.” The journey was led him to the arts. 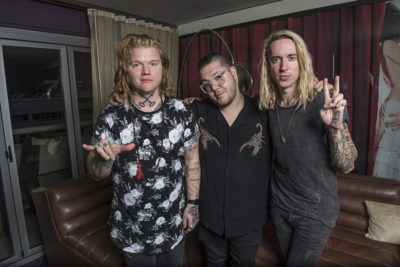 A class clown, Adam was deemed a wild child by many. “My mom placed me into musical theatre and I fell in love with being on stage. By high school I had performed in dozens of productions, for thousands of people. By high school I wanted to give writing my own material a shot. At age 13 I recorded my first song, at age 14 I started the band, Roomservice, and at age 15 began writing screenplays. It was this pivotal time where I first began to hone my skills of bringing vision to life as a result from hard work and dedication. In college I started the rock band, Lexilust. We gained a large following, played with our favorite bands, and made a name for us in the Emo scene. I later transitioned from music to film. Most notably writing, producing, and directing a game show pilot for Adult Swim called Pick-a-Split starring salty comedian Neil Hamburger, Ace Hotel’s late icon Linda Gerard, and the Ska band Suburban Legends. When nothing happened with Pick-a-Split my wife talked me into finishing my Bachelor’s degree. After graduating I landed a job in marketing at Agua Caliente Casino. I worked there for a couple of years before being promoted to the Advertising Manager at Spa Resort Casino.” Enter the Hard Rock Hotel.

Accepting the role as Marketing Manager of the Hard Rock Hotel Palm Springs changed the direction of Adam’s marketing career. “I was empowered to make decisions that proved to maximize the property’s exposure and brand awareness. I quickly identified all of the challenges the property faced as opportunities for improvement and implemented quantifiable solutions and standards of procedures. I capitalized on the company’s mission statement of ‘creating authentic experiences that rock’— with an overall goal of bringing ‘big city’ activations to downtown Palm Springs. Within one year we won ‘Best Hotel’ in the Desert Sun’s Best of the Valley Awards, launched the first and only Burlesque show in the CV, created ‘Cinema Bizarro’ a horror-hosted movie night, and turned our nightclub into a live music venue — most notably hosting the bands Senses Fail and The Crystal Method. Being in a leadership role where you are empowered with a team that stands behind you and your vision is a key element.”

Adam has consistently taken a leadership role in all he has done to lead up to his current position. “I didn’t realize it at the time, but this was arguably my first job in marketing. As the lead singer I wrote all the lyrics in screenplay format and developed a signature style to our songs. I always pushed the band to maintain an image and to write songs within our brand standard – to sound like us. The ultimate takeaway was mastering the art of selling yourself.” 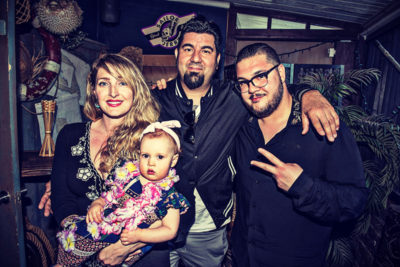 Adam has had some rewarding elements to his career. “I created a social media content marketing campaign with my partners at Scene Creative designed to spark organic engagement, reach, and Facebook and Instagram followers. The campaign was called the ‘Sound of Your Stay Artist Series’. All Hard Rock Hotels feature the ‘Sound of Your Stay’ amenity that allows guests to check-out guitars, record players, and DJ mixers. I utilized my personal contacts to invite some of my favorite bands to stay and vacation free of charge in exchange for a photo and video shoot of them playing instruments checked-out at the front desk. Over 3 months we hosted Jared Swilley and Cole Alexander of Black Lips, Aaron Gillespie and Spencer Chamberlain of Underoath, Buddy Nielsen of Senses Fail, Anthony Raneri of Bayside, Anthony Green of Circa Survive, and Chino Moreno of the Deftones. Not only did we create some really amazing content that gained tons of views and likes, but we were able to really connect with these artists on a personal level.”

Adam’s wife and one year old daughter provide the necessary inspiration to continue to do what he does every day. “My family is my daily beacon of light. They provide in helping me in the process of bringing creativity, ideas, and vision to my life.”

Adam feels there’s a whole spectrum of possibilities if he was not working in marketing. “On one end, I can see myself hustling for investors at a start-up company in Silicon Valley. At the other end, I can see myself painting characters of tourists as a beach bum in Maui. The only constant in this spectrum is that it would have to be something I could pour my heart into.”

Adam is proud of the list of awards and accolades he has received over the years. “I’ve been on the Dean’s list, won Employee of the Quarter. My band won some awards. I was nominated as Best Director at the Idyllwild Film Festival. But to be honest, I feel most proud of being named by CV Weekly as one of the Top 10 Most Influential and Interesting Men of 2018. I’m sincerely honored and grateful for this recognition.”

Staying grounded is an absolute choice for Adam. “Prioritizing and keeping my professional and family life highly organized keeps me focused.” Adam paints with acrylics to replenish his mind, does yard work to rededicate his body and says nightly prayers to retune his spirit”.

“I have a lot of mentors and idols. However, in my adulthood it’s become evident that the individual I’ve held in the highest regard for the longest period of time is my late Uncle — Joe Steinberg.  He was a free-thinking family man with an incredible IQ and larger-than-life personality. He served in World War II, played the guitar, directed movies, and left his children and grandchildren with a legacy. He was an all-around great man who was the life of the party.”

Adam’s mantra and mission statement is adopted from his family: “‘Nothing happens unless you make it happen’ – a beloved saying from my grandfather Harry Stonehill. I’ve lived by it for as long as I can remember.”

Adam has such an affinity for the arts and cinema in particular. “My first memory of going to the movies was when I was 5 years old. My parents took me to a late night double-feature showing of JAWS and The Monster Squad at the Palms to Pines movie theatre in Palm Desert. If you grew up in the CV, that theatre is super nostalgic. 30 minutes into JAWS I fell asleep and woke up just in time for The Monster Squad. It blew my mind; kids teaming up to battle all the Universal Monsters to save the world. Insane! To this day, it remains my top shelf classic.”

Adam’s favorite TV show is Breaking Bad. “The show was a masterpiece; hands down, storytelling at its best. Vince Gilligan is beyond visionary.” His favorite bands are Sublime, Millencolin and HIM and his favorite album is 40oz. to Freedom by Sublime. His favorite book is The Great Gatsby.

Something you may not know about Adam: Stan Lee, creator of Marvel Comics and Spiderman, based the character Green Goblin after his Grandfather, Harry Stonehill.

Adam will be representing Jewish Family Services of the Desert for some very personal reasons. “When I was young I went through some hard times and they provided counseling that I attribute to helping me overcome what could have become a more serious issue. They also donate eye glasses to kids here in the valley and lots of other great stuff.”