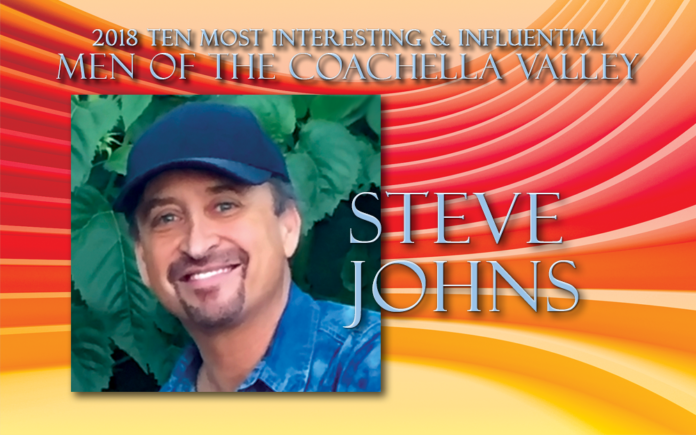 Noted for his expertise with nightclubs, parties and promotions, Steve Johns has been known as the “nighttime mayor” of nightlife in the desert for close to 40 years, and he is still going strong.

If you’ve ever had the pleasure of meeting Steve Johns, you will notice that outwardly, he might seem to be the opposite of the industry that he loves. He is not loud, or flashy, but rather extremely generous, kind, and camera shy to a fault. He makes you feel at ease, and comfortable, the best qualities of a perfect host…making it all about the guest and not about himself, the spotlight is on you. 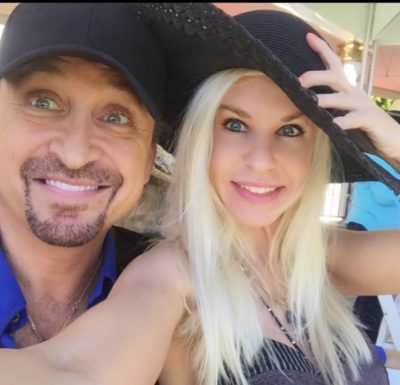 Born in Chicago and the youngest of five, Johns moved to Palm Springs as a child with his family. His father was in publishing, and owned Kitchen & Bath Magazine, which was known world-wide. He and his family lived in the well-known, affluent neighborhood of Las Palmas. He played with the children of celebrities, the streets of the famed neighborhood was his playground. He attended the local schools, and later Palm Springs High School, where he was known for throwing wild parties. It would be these parties that would set the stage for his future.

“I throw good parties,” says Johns as he giggles mischievously, referencing the party that started it all for him. It was a party that he had right after graduation. Because the parties that he would have at his house would draw the attention of the police, he needed a different location. He reached out to the Agua Caliente Band of Indians to see if he could rent out their tribal building on South Palm Canyon. His motivation for this, was because the reach of the police could not extend onto Indian land, pretty calculating for a teenager. The party was dubbed “The Party of the Century,” and drew attention from all over town. Everyone was invited, and pretty much everyone showed up.

Johns recalls being a patron of Zeldas Nightclub shortly thereafter in the early 80’s, owned then by Harvey Izen and Joe Gallager, and getting one of the first VIP Cards there, even though he was under age. When John’s through a raging party at Saturday’s Nightclub, owned by Mel Haber, which was not far from Zeldas, Izen and Gallager were not pleased, realizing that he had stolen some of their business. They confronted Johns on the steps in front of Zeldas and said, “Maybe we should take away his VIP Card?” Johns quickly retorted and suggested that they hire him instead to do marketing and promotions, and so they did.

After sometime at Zeldas, he worked for Brandy’s Nightclub, and then was beckoned back to Zeldas. Johns then helped to get Cecil’s on Sunrise up and going with Mike McCormick, in the mid 80’s, at one point almost becoming a partner. When the deal fell through, Johns was immediately snapped by Pompeii Nightclub, run by owners Vaso and John Boreta and bar manager, David Spinale. The club was not up to its potential, and they knew that Johns could turn it around. Johns exceeded expectations, making Pompeii the hottest nightclub in desert and known across Southern California. The club was notorious for hosting outlandish parties, and catering to celebrities and locals alike, and even some infamous characters such as mobster, “Sammy the Bull” Gravano. The party lasted under Johns for 5 years, until the club was closed due to a major fire in 1991.

Johns switched gears and did business consulting for some time after the club closed, as well as starting PS Page Me and Check Cashing Stores, along with Charles Singer. Then, in 1996, Pompeii came calling again after being resurrected by Paradise Corp. Johns returned to the massive 26,000sq. ft. club as General Manager. He jokes about being brought back into Pompeii, loosely quoting a scene from Godfather III, “Just when you think you’re out, they drag you back in.” Although Pompeii’s second go around was short lived (closing in early 1998), while it was opened, the club broke attendance and financial records. Johns had once more made it the hottest club in the Coachella Valley, it was amazing and is still talked about with reflective euphoric delight from those who still remember the clubs heydays.

Johns continued to consult, and was a minority owner in South Beach Nightclub in the mid 2000’s, until the club changed hands. He also authored, Idiots Guide to Starting and Running a Bar and was a partner at VIP Palm Springs with Lee Masterson. Today, Johns does consulting and marketing for a variety of businesses including, Desert Dreams Dentistry, Citi Dank Dispensary, Coachella Winery, The World Famous Palm Canyon Roadhouse, and everything else in between. 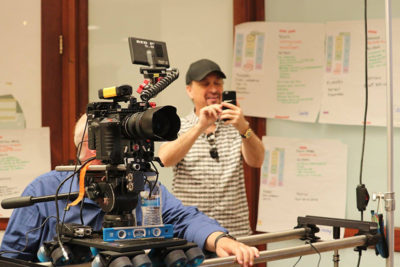 The most rewarding part of the nightclub business for Johns is creating an atmosphere for a party that everyone will enjoy. It is part of what inspires him to do what he does, “I love what I do, or I wouldn’t be doing it,” says Johns. He also points out that the challenges in the business are vast, and it takes perseverance and a true love for it to be successful, giving props to his industry colleagues. Some promoters do quarterly or once a year parties. But promoters/owners like myself, Rod Copeland, Mike and Cody McCormick, Ernesto Gutierrez (Zeldas), David Mariner (Village Pub), Greg and Eleanor Lariviere (The World Famous Palm Canyon Roadhouse) and Dominic “Mr. Miami” Scharff (Copa Nightclub), have to create and market daily, weekly and monthly events, which is some of the hardest things to do in the business…to keep the party going,” said Johns.

Accolades and awards have never been a goal for Johns, it’s not about the recognition and he is grateful for every “Thank you.” He has been a part of a multitude of charity events throughout the years, and is dedicated to, Variety-The Children’s Charity of the Desert, where he was a board member for 16 years.

When asked what he would be doing if he was not in the nightclub industry he says laughingly, “Sitting on a beach somewhere in the world”. Which is actually how he enjoys spending his vacations. He enjoys his single life, and to relax and unwind, Johns is all about massages, “It’s my vice,” he says. He also enjoys going to the movies quite often, some of his favorites are, Casino, The Godfather and Iron Man. As for his preference in music, he truly is open minded and enjoys all genres.

The way he keeps himself together is by pacing himself and by writing everything that he needs to do down on paper, “I keep really good notes,” says Johns. He advises that when you write down what needs to be done, you are more inclined to accomplish it.

His mantra that helps him every day is simple and poignant, “A Good Day Ahead.” Its positive message keeps him focused on the best outcome possible. 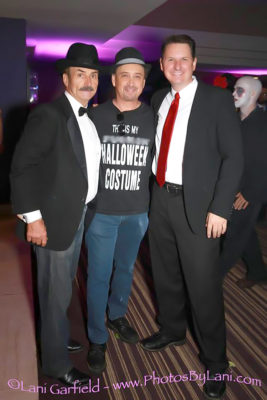 Perhaps the thing that would surprise people the most about Johns is that he is not the extrovert that is most times associated with being in the nightclub business, “As much as I might seem on my game in the business, I’m actually shy….very introverted,” he admits.

Steve Johns is embedded in the nightclub history books in the Coachella Valley, and has dedicated himself to the betterment of the community through working with charities. With his attention to detail, creativity and generous nature, there is no one like him who can do what he does. For Johns, “the party will always be in progress.”

Steve Johns will be representing, Variety-The Children’s Charity of the Desert, as his intended charity at the Top Men’s & Women’s Fundraising Charity Event on May 24th at Hotel Zozo in Palm Springs.