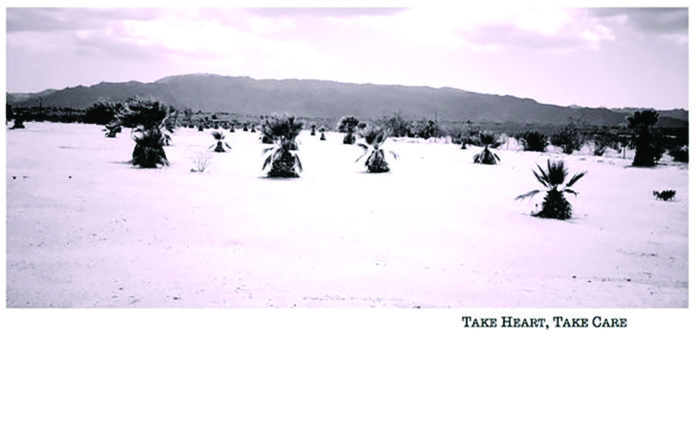 By day, Tim Chinnock works as a mild-mannered doctor, specifically, an Assistant Professor of Pediatrics at Loma Linda University, but at night, he plays Rock N’ Roll. Sounds a bit like a Marvel superhero or the plot of a late ‘80s television series, right? But it turns out Tim’s narrative is every bit as interesting as a comic book origin story.

Tim was born in Redlands, to a career Navy man and his wife. For a while the family lived in South Carolina before returning to the Inland Empire a few years later and settling in Oak Glen. Medicine and the military were family tradition for the Chinnocks, but they were also a very musical clan. Tim began playing an instrument at kindergarten age. Struck by the Baroque beauty of Pachelbel’s “Canon In D,” Tim started with violin lessons that lasted until he was about 10 years old. Soon he had mastered drums and guitar.

Growing up in strict and religious household, the family playlist featured two genres, Classical and Folk. “Puff The Magic Dragon” had a profound effect on young Tim, but as he came of age, he was exposed to more au courant styles of music. Cloaking himself in flannel and adopting a fashion-forward haircut, he immersed himself in the Grunge movement, diving into Nirvana, Pearl Jam and Smashing Pumpkins. Green Day and Live’s “Lightning Crashes” also made indelible impressions.

At the tail end of Junior High, Tim and two eighth grade pals formed their first band, Basin. Rotating practice sessions took place in each other’s garages. They wrote some songs and played a couple of gigs. Separate high schools spelled the end of Basin, and Tim soon moved behind the drum kit for Christ Commission, the combo he played with throughout high school. Around this time, he also met his future wife, Faith.

Faith had also spent her formative years in California, her parents were spiritual hippies. Her musical talent is also hereditary. Her great grandfather was a travelling musician and her father, Curry Chris Harter, is a singer/Blues harmonica player, currently based out Of Des Moines, Iowa.

In college Tim was the drummer for a jam band called Ebu And The Dancing Guru, (of course they were). Although he enjoyed making music, Tim viewed it as a fun distraction, never really taking it seriously. School was a top priority. He joined the Navy, not just to maintain family tradition, but also to secure a medical school scholarship at Loma Linda University. His family has enjoyed a long history with the school, both grandfathers and his father graduated with medical degrees.

Once he entered active service, he was stationed at a Naval Hospital in San Diego where he completed his pediatric training. By 2011, he received orders to the Marine base in 29 Palms. When Tim and Faith relocated to the high desert, they quickly fell in love with their surroundings.

Even though Tim no longer played music, he remained an avid listener. His influences are both eclectic and expansive. In their new environment, Tim and Faith both felt compelled to create their own music. They named their nascent collaboration, Adobe Collective, as homage to the house they were renting (and eventually purchased). Within the space of a couple of years, they had accrued enough original songs to make a full-length album.

Adobe Collective’s self-titled debut arrived in 2014. Co-produced by Tim and Gar Robertson, the album garnered critical acclaim and almost immediately, the duo were playing select gigs at Pappy & Harriet’s, as well as low desert venues like the Hood. They even secured a slot at the prestigious Joshua Tree Music Festival. As they began writing songs for a second album they met Chris Unck.

The Georgia native and his band have shared stages with Paolo Nutini, V.V. Brown and Train. In 2010, Pink personally chose Chris’ band as openers for her world tour. Throughout his career, he’s collaborated with artists like Gavin De Graw, Lisa Loeb and Butch Walker, but had grown wary of the peripatetic existence of a touring musician. So he relocated to Joshua Tree and set up High Lonesome Recording Studio.

Tim, Faith and Chris connected on a symbiotic level and began recording an EP. They decided to follow through with a second long-player, and the result is the recently released 11 song collection, Take Heart, Take Care.

The album kicks into gear with the rollicking “Desert Shame.” Over rattlesnake-shake percussion, growling guitar chords and rubbery bass lines, playful lyrics recount a night of bacchanalian excess. Tim and Faith’s vocals intertwine like a 21st century Gram & Emmylou, “Pull the car over I need a shoulder to lie on girl, it started out fun now it feels like the end of the world/My hands and knees on the side of the road I’m sick, and New Year’s Day will never be a cure for it.” On the instrumental break a spiral-scratch guitar solo is crisp and economical, undercutting the shambolic, shaggy-dog story quality of the lyrics from Tim and Arlan Lackey.

“Desert Shame” segues effortlessly into “Hey, Hey Look At Me Now.” The keening melody is anchored by a heartbreak-beat, burnished electric guitar notes, swirly organ and searing pedal steel. This cracked Country charmer wears it’s heart on its sleeve sharing some musical DNA with Bob Dylan’s “I Threw It All Away” and the Band’s epochal “Cripple Creek Ferry.”

Philosophical lyrics push for cosmic consciousness and ecclesiastic epiphanies; “What kind of fool gave you the master key? And who the hell do you think you’re supposed to be/All this push and pull is feeling so empty, I am just waiting for the day that I feel free.”

While Adobe Collective’s debut was remarkably assured, Take Heart… adds a plethora of colors and textures to their sonic palette. Initially, “WONDERLUST” unspools slowly, propelled by a kickdrum beat and sidewinder guitar riffs. Tim’s soothing tenor glides over soaring power chords as he insists “I’m filled with wonderlust and getting nowhere fast.”

Suddenly, guitars rev and accelerate, sprawling and retreating, slithering around ascending bass runs. Just as unexpectedly, the tune shudders to a halt, powering down before downshifting, adding a wash of organ and some wordless vocalese. It almost feels like three songs in one.

“WONDERLUST” seems to obliquely celebrate the creative isolation of Wonder Valley, conversely, on “Shadow Of L.A.” the lyrics take aim at the smoggy sunshine sprawl that is the City Of Angels. Over a chunky backbeat and ‘70s Swamp-Boogie guitar licks the surprisingly Glam-tastic melody slightly echoes the music of Band Of Skulls and Dead Weather, with just a hint of Golden Earring. Pinging sonar riffs trickle down like acid rain, it’s easy to visualize a “Blade Runner”-esque dystopia that envelopes the song.

The skittery Psychedelia tips into intersteller overdrive on “Black Heart.” The opening salvo is feedback-drenched guitar awash in pedal effects. Slowly, a clackity rhythm emerges, jumped up, jittery and full of menace. Cryptic lyrics hint at unhealthy addiction; “Don’t you know, you’re holding up the earth?” As cyclonic riff-age signals a downward spiral.

So many new bands feel the need to cobble together a surfeit of sounds, adding bells and whistles to an already crowded aural landscape. Happily, Adobe Collective is content to let their music breathe.

Four tracks manage to convey their musical acumen without ever breaking a sweat. The spare and evocative “Tamarisk” is a percolating ode to the deciduous salt cedar. Circuitous acoustic arpeggios are tethered to a galloping beat and twinkly percussion. Tim and Faith’s lush harmonies crest over the arrangement.

“As Far West/Sunlight/Flash Flood” feels like a gentle benediction in ¾ time. Tim and Faith’s voices bob and weave through meandering acoustic and electric filigrees that flutter and pulse. Their mien is delicate and reverential, as they quietly reaffirm their nearly two decade commitment; “I should’ve known dear when they said this was the perfect life, that we were two seasons connected only by the wind.”

“Carousel Or Hear Me Echo” is a dusty desert waltz with hints of Gypsy Jazz. It opens tentatively, as finger-picked acoustic guitar connects with Faith’s wordless croon like a musical pas de deux. Tim’s tone is urgent as he implores “don’t slow me down, hear me echo.” Slowly the tune gathers speed, adding sousaphone accents chunky percussion and saw.

Finally, the winsome “Nothing There (Honestly)” blends sparkly glockenspiel, and a hiccupping rhythm with shimmery guitars and weepy pedal steel. The lyrics offer withering commentary on the divisive disconnect that divides the country; “Both sides I say are really much the same, they can find someone to blame at the butt of a gun/But as for me, I’m somewhat in-between, and there’s nothing in-between at the butt of a gun.”

The album closes rather ambitiously with the two-song suite Of “Billy’s Death Poem: Carborundum” and “We Mixed Their Ashes Up Above Gamma Gulch.” The lyrics of the former come directly from a poem written by Tim’s late maternal Uncle, William Ross Wagner. A troubled soul, Billy spent some time in Pioneertown before ending his life prematurely. Over plangent acoustic riffs, Tim quietly recites this restless farewell; “And I the only conscious form have lost the skill and will not nurse existence as before.” Suddenly the tempo accelerates wildly, chugging rhythms, spacey keys, roiling bass lines and skronky guitar lock into a sandblasted groove. Just as quickly, the calibrated chaos stops on a dime. 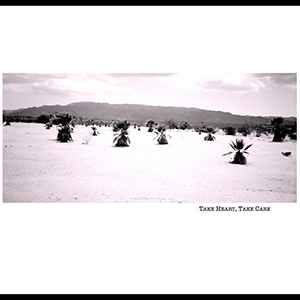 Take Heart, Take Care delivers on the promise of Adobe Collective’s debut. It would be easy to characterize Tim and Faith as the High Desert’s answer to Johnny and June. But their music is so much more than that. Like the deceptively desolate surroundings that provide much of their inspiration, Adobe Collective’s music is richly nuanced, vibrant and colorful, at once rough-hewn and refined.

(Adobe Collective is playing a secret show in Joshua Tree this Friday, June 16th, and they are also playing Pappy & Harriet’s in Pioneertown on Thursday, July 27th)