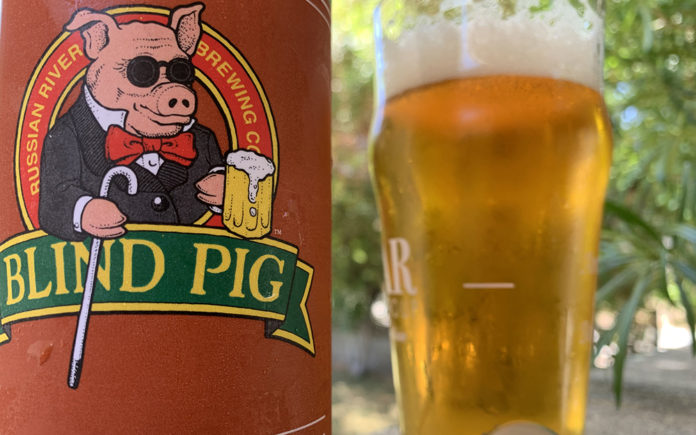 Change is always constant. Yesterdays fresh ideas are todays trends, eventually to be last years fads. This is as true in craft beer as it is in anything pop culture; the same way brewers want to haze and fruit everything in 2019, they wanted to over-hop and bitter everything in 1994. The mid-90’s were a time of ska bands, Doc Martins, mom jeans, and the birth of the SoCal-style, West Coast IPA. Very dry and exceedingly bitter, an icon was born in the city of Temecula, which eventually found another home up north; Vinnie Cilurzo’s Blind Pig IPA.

We live in a time when many small breweries offer several IPAs; I personally brew four different IPA’s over at Brewcaipa. But in 1994, the style had not yet caught on, and IPAs still were seen as something of a novelty. Vinnie Cilurzo had been homebrewing his recipe for Blind Pig a few years before opening the Blind Pig Brewery in Temecula, CA.  Cilurzo claims that he had no idea how to scale up his recipe from a 5-gallon batch to 7 BBLs (British Barrels; the standard unit for production measurement, each of which is equal to 31 American gallons), so his friend over at San Diego’s Pizza Port Brewing, Vince Marsaglia, actually gave him a copy of his entire recipe for Swami IPA (a hugely underrated and incredibly tasty beverage) to use as reference. Blind Pig IPA debuted to the public at 6.2% ABV and 92 IBU, a staggeringly high number. To understand the significance of the IBU, we should break down what this abbreviation stands for; and that’s International Bitterness Units.

In the same way that we measure a chili’s heat intensity in Scoville units, the IBU tells us how much bitterness to expect in a beer. A bottle of Bud Light contains 6 IBU, while a Heineken has 19. As intense as it is, Firestone Walker’ Union Jack IPA has 70 IBU, and that should give you the best idea of what 1994’s Blind Pig was like. Cilurzo eventually left Temecula and the Blind Pig Brewery, heading north to head the Russian River Brewing Co, where he reworked the recipe into the version we’re familiar with today. Still aggressively hopped, still a testament to the citrusy flavors of Cascade, Amarillo, and Simcoe, Blind Pig IPA might enjoy the same iconic status as Ballast Point’s Sculpin and Stone’s Enjoy By series if it weren’t overshadowed by another IPA released by the Russian River Brewery.

Both Pliny the Elder and Blind Pig are have found limited distribution here in the Coachella Valley; Bristol Farms, Total Wine, and Jensen’s Food Markets have all been known to carry both beers side by side, always selling out within days, if not hours of a shipment. While Pliny has become the standard of excellence, it’s older brother Blind Pig has been relegated more to the role of gate keeper, an also-ran that you discover on the way to figuring out what your favorite IPA really is. It’s when placed side by side next to other classics of the west coast style that Blind Pig’s unique character shines. Bright and lively, the grapefruit pith and orange zest tones that have become a cliché of IPA flavor taste fresh and new. Lightly toasted malt flavors give a barely perceptible sweetness to offset the hop-dominant profile. Flavors that are similar to most every other IPA you’ve tried, somehow taste fresh in Blind Pig. There are fans of this beer to claim to prefer it to Pliny the Elder, and I would actually listen to their arguments as to why.

Russian River’s Blind Pig is an IPA firmly stuck in the trappings of the classic west coast style, never to be updated or rebuilt, leaving it to be an iconic example of the style.