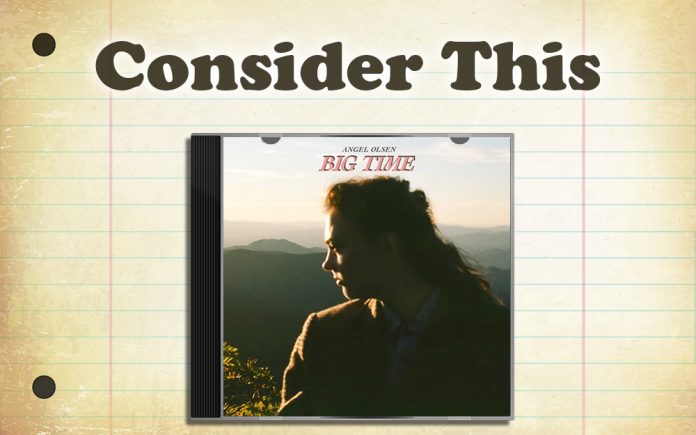 “Never thought the day would come when I would find someone to love me only, to love me only,” That’s Angel Olson, marveling at her unexpected good fortune on “All The Flowers” off her her sixth long-player, Big Time.

If it were possible for Country legend Lynn Anderson, British chanteuse Dusty Springfield and Neo-Psychedelic pioneers Mazzy Star to create a musical love child, she might sound like Angel Olson. At least that’s true for this latest record. The St. Louis native, who has been recording music for more than a decade, has turned a corner with this new one.

Angel Olsen was born and raised in St. Louis, Missouri. Adopted at age three, she was the youngest of nine siblings. She began playing music in her teens, haunting hometown coffee houses and attending Punk and Noise Rock shows at the Lemp Neighborhood Arts Center. At 16, she played guitar in a local band called Good Fight. She described their sound as a cross between early No Doubt and Punk.

After high school she relocated to Chicago. It was there she connected with lo-fi Folk musician Bonnie “Prince” Billy (ne’ Will Oldham), and he invited her to add harmony vocals to a couple of his albums, 2010’s The Wonder Show Of The World and 2011’s Wolfroy Goes To Town. 2010 also marked the appearance of her debut EP, Strange Cacti. Her first, official long-player, Half Way Home, arrived two years later. Her nascent sound mined Classic Country crooners of ‘50s as well as her like-minded indie rock compatriots, which kinda-sorta made sense, since Dolly Parton, J.J. Cale and Lucinda Williams were early touchstones.

Once she added a bassist and drummer to the mix, her music tipped the scales toward moody Garage Rock. Her ensuing album, Burn Your Fire For No Witness, garnered glowing reviews and hit #71 on the Billboard Top 200. By that time, she had settled in Asheville, North Carolina. Her next release, My Woman, upped the ante considerably, harnessing the talents of a six-piece band, and reached #47. 2017’s Phases, gathered together previously unreleased songs and early demos. “All Mirrors from 2019, was another astonishing leap forward.

2020 found her getting back to basics with the mostly acoustic Whole New Mess, which essentially found Angel reconfiguring the All Mirrors material for just vocals and guitar. Throughout this era, she also released four EPs, which included 2021’s Aisles. That one featured a selection of ‘80s cover songs (that she’d heard while shopping at her local grocery store), by Laura Branigan, The Cure, Men Without Hats, Billy Idol, O.M.D. and Alphaville. She also found time to collaborate with Mark Ronson and Sharon Van Etten.

2021 proved to be a momentous year for Angel. Not long after she came out to both of her elderly parents, they each passed away within weeks of each other (her 78-year-old mom from heart failure and her 89-year-old dad in his sleep). She also found love with Beau Thibodeaux, a writer who identifies as non-binary and answers to they/them pronouns. This confluence of joy, sorrow, heartbreak, happiness and grief became the impetus for her sixth long-player, Big Time. The first three songs set the stage for this ambitious 10-song set. “All The Good Times” starts everything off with a propulsive drum salvo that folds into a thwocking beat. Mournful organ, willowy lap steel, twinkly concert bells and jingle jangle guitar fall in line. The melody shares some musical DNA with the Elvis Costello deep cut, “Indoor Fireworks” as well as Bob Dylan’s scabrous “To Ramona.” but her manner evokes comparisons to Kris Kristofferson’s tender kiss-off, “For The Good Times.” The opening verse coolly cuts to the quick; “I can’t say that I’m sorry, when I don’t feel that wrong anymore, I can’t tell you that I’m trying when there’s nothing left to try for, and I don’t know how it happened, we’ve both abandoned the reason we used to believe, was it love that we shared, when we easily cared, now it’s impossible to conceive.” As the arrangement gathers speed, it locks into a fuzzy Wall-Of-Sound/Muscle Shoals groove, stacking strings and a fluttery brass fanfare. As the song meanders to a close, one thing is certain, “thanks for the free ride and all of the good times,” it’s over.

Next up, Angel deftly flips the script with the title track. She jettisons the baroque arrangement and instrumental ballast, paring it down to the essentials, creating a kind of pastoral twang. Lush organ notes lattice atop yearning pedal steel, sparkly guitars, Honky-Tonk piano and a chunky beat. Her yodel-y vocals can’t contain her giddy delight; “Good morning kisses, give you all mine, pull back the curtains, show me the sunshine, needing this coffee, needing some nature, need it right now, it can’t wait until later.” Wah-Wah guitars are bookended by willowy pedal steel, underscoring each sunny turn of phrase. Co-written by with her love, Beau Thibodeaux, song flat-out revels in the moment.

Meanwhile, “Dream Thing” unfurls almost in a fugue state. Gauzy and ephemeral, the song is powered bloopy Wurlitzer vroom-y zither, feathery keys, searing pedal steel, drowsy guitars, ticklish castanets and an akimbo beat. Plumbing the subconscious, lyrics are cryptic and fragmented, addressing a spectral ex; “I was lookin at old you, lookin’ at who you’ve become, I was hoping to talk some, music had already begun, I never thought you wouldn’t be able to put it all behind, I guess I was blind/Are ya’ll the same, bitter to the end, did all you asked of me and I was just a kid.”

Early in her career, Angel was labeled a Folksinger, that designation feels apropos on the aforementioned “All The Flowers.” Hushed and contemplative vocals float above a lowing string section, plangent acoustic guitars, plinky-plunky piano, spidery bass and woozy harpsichord. Echoing the gentle reveries of British Folkies like Fairport Convention and the late, great Nick Drake, lyrics recall the dark days before friendship blossomed into love; “I’ve been spending too much time searching in vain to find the only reason, the only reason to be alive, to be alive…and with another, and with another, to be alive, to be alive.”

Truly, Angel’s music resists categorization. Take “Right Now,” which opens slow and easy, just plaintive vocals and strumming guitars. As Neil Sedaka once noted, breaking up is hard to do, initially, she tries to soften the blow; “It’s time to let it go, you say you understand, some truth is never known, unless you’ve lost your hand, until you’ve had to fight and waited through the night, you won’t know if it’s real until you have to deal.” But tact and finesse fall on deaf ears. By the second verse, an echo-y big beat kicks in, as if to signal she’s exhausted all forms of diplomacy. Fleet, nylon-stringed fret-work connect with shivery mandolin, moody Mellotron, as ominous strings and menacing horns collide, creating a stompy musical maelstrom. “I need you to look at me and listen, I ain’t the past coming back to haunt you….I need to be be by myself, I won’t live another lie about feeling that I have, I won’t be with you and lie.”

Then there’s the kinetic pulse of “Go Home,” which wouldn’t seem out of place on a Kate Bush record. Once again, strings and horns are salted in the mix, along with fluid bass lines, Fuzz guitar, darting piano, dulcet harmonium, plush organ colors, courtly harpsichord and a trembling rhythm. Lyrics wrestle with moments of humility and hubris and the conundrum of placing your trust in someone else; “I feel like someone else but I’m still trying, trying, I’m dancing baby, but I feel like dying, if we can’t make it, I hope you show up in time to face it.”

Many of the songs here allude to the highs and lows Angel has experienced the last couple of years. But two stand out from the pack, “Through The Fires” and “This Is How It Works.” The former is a gloomy, piano driven lament that’s equal parts torch and twang, thanks to lachrymose strings, sun-dappled guitar, subtle vibraphone, barely there bass and a sturdy beat. The instrumentation pools and eddies, as lyrics quietly chronicle the end of her first queer affair; “….the feeling I found showed me how I could lose, to love without boundary and put it to use/To remember the ghost who exists in the post, but be freed from the longing, for one moment to be lost.”

The latter blends lonesome pedal steel, honeyed harpsichord, flinty guitar, thrumming clavichord, juke joint piano and a tick-tock beat. Lyrics split the difference between confession, conversation and cri de Coeur; “Staring out at the walls, is there somebody I can call, someone who knows where I am, someone who knows how it’s been…Take it one day at a time, I’m moving everything around, I won’t get attached to the way that it was, this is how it works for me now, this is how it works for me now.” On the break, shadowy pedal steel partners with iridescent piano notes before Angel admits “I’m so tired of saying I’m tired.”

Other interesting tracks include the mournful Ghost On, which drily notes “The past is always with us,” and the closer, “Chasing The Sun.” The song unspools slowly, painterly piano notes brush up against a bare-bones beat before being supplanted by swoony strings and breathy, intime vocals. The lyrics are suffused with that heady sensation of loving someone and being loved in return. Time stops, and it blurs when you’re with the one you love; “I’ll go wherever you are going, I’ll be somewhere near, I can’t seem to get anything done with someone like you around, everyone’s wondering where I’ve gone, having too much fun doing nothing, doing nothing, busy doing, doing nothing, chasing the sun, chasing the sun for you. spending the day driving away the blues.” It’s a sweeping and cinematic finish to a transformative record.

To produce Big Time, Angel enlisted acclaimed singer-songwriter/multi-instrumentalist/producer Jonathan Wilson, trekking to his Topanga Canyon studio. She arrived relatively unprepared- typically, she’s fully prepped- but she’d been through so many life-changing events, good and bad, that they just started from scratch. In a recent interview she recalled “I just said ‘fuck it,’ give me a rollie and some tequila. We’re making a record.”

Angel Olsen kind of breaks your heart, but in a good way, and that’s okay. Much like k.d. lang’s Ingenue and Shelby Lynne’s I Am Shelby Lynne, this is another watershed effort. The record’s title doesn’t so much imply that Angel has joined the major leagues (although she kinda has). It really comes from a phrase Angel and Beau repeat to each other, “I love you, Big Time.” That’s how I feel whenever I listen, I love this record Big Time.