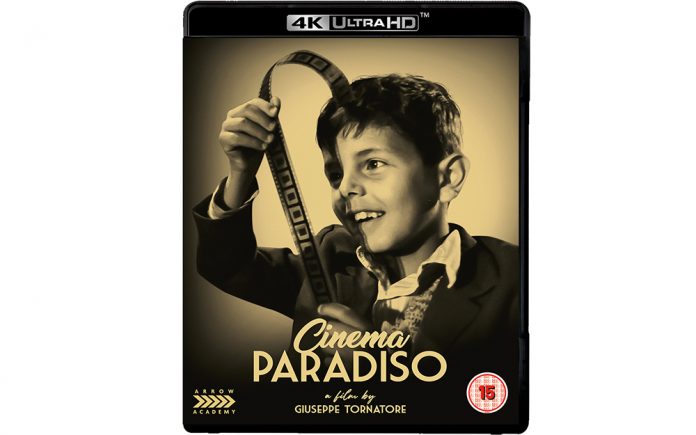 Big thanks to Arrow Academy for their marvelous 4K restorations and transfers of film favorites from the not too distant past.

This poignant love story about the seductive power of movies themselves follows young Salvatore Di Vita (Salvatore Cascio) as he discovers the perfect escape from life in his war-torn Sicilian village: the Cinema Paradiso movie house, where projectionist Alfredo (a terrific Philippe Noiret) introduces and inspires in the boy a deep, life-changing love of films.

When Salvatore falls in love with Elena (Agnese Nano), a beautiful local girl, he takes over as the Paradiso’s projectionist.  His old friend Alfredo convinces Salvatore to leave his small town and pursue his passion for filmmaking.

When Salvatore, now a successful film director returns home for the funeral of Alfredo, his old friend the projectionist, memories of his first love affair with Elena and all the highs and lows that shaped his life come flooding back as Salvatore reconnects with the community he left 30 years earlier.

Although certainly charming, the film lacks depth but serves more as a lighthearted, nostalgic coming-of-age tale than a profoundly meaningful emotional drama.

This classic multi-award winning (including Best Foreign Language Film Oscar, 5 BAFTA Awards including Best Actor, Original Screenplay and Score, the Grand Prize of the Jury at the Cannes Film Festival and many more) film remains a wonderful if idealized, celebration of youth and friendship) is an often stirring reminder of the everlasting magic of movies. 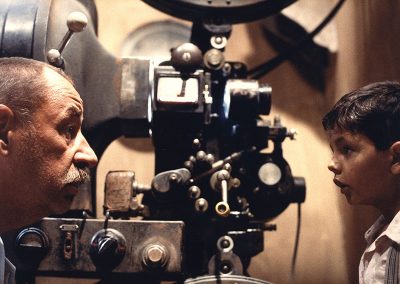 The theatrical version is a movie of great passion. In the Director’s Cut, it’s still an excellent film, just not a transcendent one.

“A Dream of Sicily” – 52-minute documentary profile of director Giuseppe Tornatore with interviews with the director and extracts from his early home movies and interviews with director Francesco Rosi and painter Peppino Ducato, set to music by Ennio Morricone.

“A Bear and a Mouse in Paradise” – A 27-minute documentary on the making of Cinema Paradiso and the characters of Toto and Alfredo, featuring interviews the actors who play them, Philippe Noiret and Salvatore Cascio as well as Tornatore.