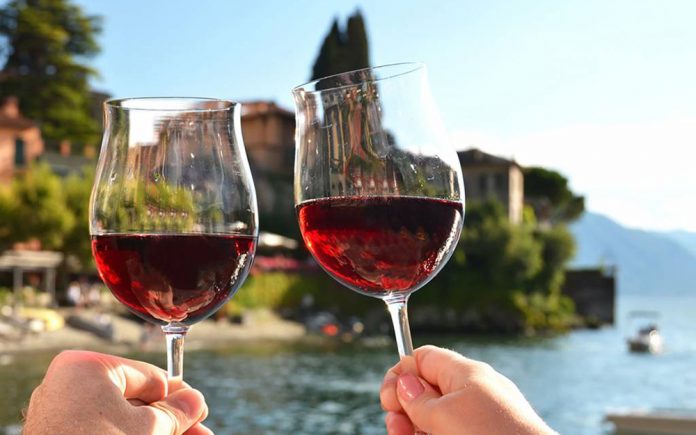 Or, as the Italians would say it: L’Italia in un bicchiere di vino [Lee-THAL-yah een oon beek-k’YEH-reh dee VEE-no] There you go! Language study always prompts the mind; and, it’s a good line to use at the wine bar.

After our slew of sparkling wine articles in the past months, I thought it would go well to discuss some comforting reds of winter. And what varietal was it to be? Hmmm…

well—since two absolutely delicious red wines from Abruzzo came across my desk and readily onto the dinner table, we’re going with an Italian grape.

Generally speaking, upon reading the title of this piece, most Italian wine lovers will first think of either a Sangiovese or Barolo before they would think of Montepulciano d’Abruzzo [MOHN-teh-pull-CHAH-noh da-BRUT-so] as a grape that bespeaks Italy. And they’d be correct. But it’s historically accurate to understand that, just as in Bordeaux when a weak vintage occured—the Bordelais sought after the rounder reds of Southwest France and even Rioja, so too did Tuscany bulk up their acidic Chianti with the warm Montepulciano wine. And througout all Italy today, they still use a lot of Montepulciano as a blending wine.

First—let’s get the confusion out of the way. Many of you Sangiovese drinkers are aware of the excellent wine from the Brunello neighbor in the Chianti region known as Vino Nobile di Montepulciano. That’s right—there is a town in Chianti with the name Montepulciano. But a clone of Sangiovese is grown there and produces Vino Nobile; the Montepulciano grape is not grown in that region at all.

There is a mystery of Monepulciano for which I can fuel right now. Let it be known that in the last leg of the ascent of Corno Grande, the highest peak in Italy’s Appenine chain, you’re going to have to be on all fours to view both the Mediterraean on the west and the Adriatic Sea on the east. It’s the only place in Italy to view both bodies of water—and it’s a very cool sight indeed! But that peak area is full of loose clods of shale and each step unleashes a min-avalanche of rock and dust; so you’ll see most folks just crawling around like eery dancers at the Cirque du Soleil.

It’s been written that this ten-thousand-foot hunk of limestone is the center piece of the Gran Sasso d’Italia, or “great rock of Italy”, the cluster of mountains that dominates northwestern Abruzzo.

Restaurateur Joe Bastianch, who knows Italy well, said of the Abruzzo wine region, “While the verdant meadows of the Alto Adige or Valle d’Aosta [in the north] might bring to mind a scene from The Sound of Music, the uplands of Abruzzo are more barren, drained of color, giving a look of the lunar surface.

“Even mentioning the green vineyards of Abruzzi to an Italian from somehere else, and you would be told of a lofty wilderness where fiercely proud people share their habitat with wolves, bears, and deer, where crafts such as weaving and pottery-making are still on-going industries, where woodsmen and shepherds keep the womenfolk near the stove as they devour hearty food and drink amply strong black wine.”

Montepulciano is a medium-bodied, but as mentioned above, a hearty and robust dark red wine. One would not consider otherwise from such a rough region. At the same time, the wine is always on the soft side—less tannic than you’d expect—and is generous with a heaping helping of black berry fruit, black cherry, plums, and seasoned with Italian “garrigue” such as oregano, basil, thyme, fennel, and rosemary.

And as mentioned also—being a blending grape, it is the second-most widely planted red grape in Italy after your favorite Sangiovese grape of Chianti.

Montepulciano will cut through some of the meatiest meats such as beef brisket and salami, and pair nicely alongside rich, roasted winter vegetables. If you learn only one tip about pairing with Montepulciano, it is to match it with something with substance (fat). And when it comes to cheeses, have it with your Mac & Cheese, aged Cheddar, Parmesan, Asiago, and Pepper Jack.

Many of you already know the wine sold at Trader Joe’s for around five bucks—and it works fine for a quick table wine. Many others know the very popular Cantina Zaccagnini with that grape twig attached to the bottle. It’s always very tasty and sells for around $15. (That’s pronounced ZAKKA-nyee-nee if you wish to ask for it).

But I have found my best friend whose name is Francesco Cirelli Montepulciano d’Abruzzo 2018 ($22). This wine is so delicious I’ve become monomaniacal—it’s the only wine I wish to drink at the moment. It’s got fresh blackberries, cherries, and cranberries with earthy elements of crushed herbs and clean minerality. Layers of complexities continue towards a fantastic finish of bright cherry—perfect for all meals! For those who enjoy Italian reds, even if you didn’t know exactly the grape you’re tasting—you’d still know it’s classic Italian wine making: It’s Italy in a wine glass. 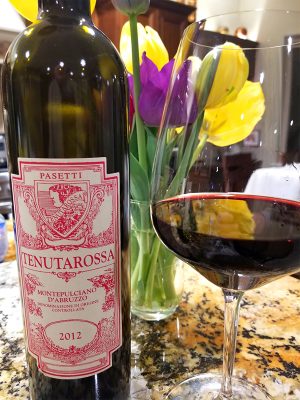 My next favorite is the Pasetti Tenutarossa Montepulciano D’Abruzzo 2015 ($30) This one has a bit of age so decant an hour before serving. It’s a beautiful dark muted red wine exhibiting rich aromas of dark berries and cigar box. Flavors of ripe fruits, sweet spices, black pepper, leather, and cocoa that also exemplifies Italy in a wine glass with its subtle licorice backdrop. Full-bodied, warm, intense and structured with a solid tannic frame! Delizioso!!

Testarossa is Pasetti’s flagship wine and bears a distinctive red label which was inspired by the family’s ginger-haired women who played such a key role in the winery’s history. The grapes are grown in the foothills of Gran Sasso. These conditions ensure that the grapes achieve optimum maturity as well as plenty of elegance and freshness thanks to the cooling breezes from the mountains and the Adriatic Sea. Cool Stuff! Saluti!