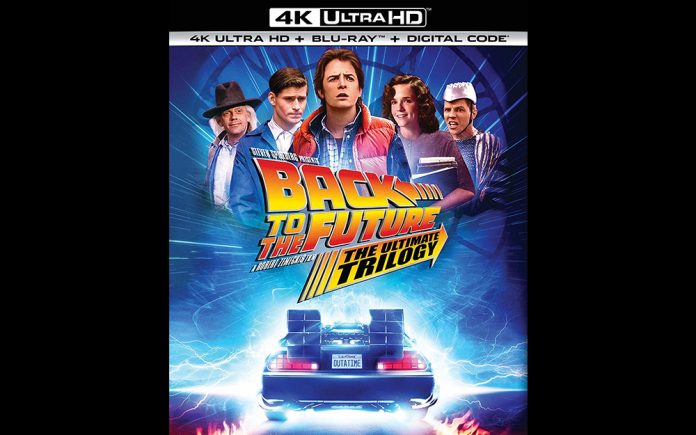 “YOUR FUTURE IS WHATEVER YOU MAKE IT.” -Doc Brown

In honor of BACK TO THE FUTURE’S 35th anniversary, one of the biggest motion picture trilogies comes to 4K Ultra HD for the first time ever.

Now we can experience this terrific movie as never before with over an hour of new bonus features with rare casting auditions of actors Ben Stiller, Kyra Sedgwick, Jon Cryer, Billy Zane, Peter DeLuise and C. Thomas Howell, a tour of the film’s props and memorabilia hosted by co-writer/producer. Bob Gale, a sneak peek at the new musical show and a special episode of the Popular You Tube Series “Could You Survive The Movies?”  Join Marty McFly (Michael J. Fox), Doc Brown (Christopher Lloyd) and a time traveling DeLorean for the adventure of a lifetime as they travel to the past, present and future, setting of a time-shattering chain reaction that disrupts the space-time continuum! 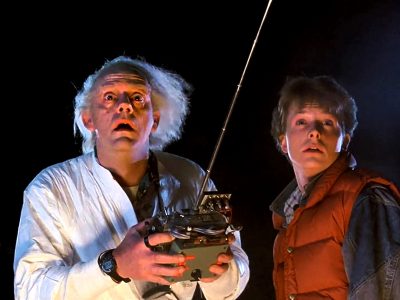 Deluxe packaging includes all three movies in a collectible discbook plus all-new bonus content.  For the first time, the past, present and future collide in eye-popping Ultra HD resolution for a tike traveling celebration.  The newly restored transfer delivers the highest quality picture, more colors than ever before, and immersive, multi-dimensional sound.  From filmmakers Steven Spielberg, Robert Zemeckis and Bob Gale, this memorable anniversary collection features hours of bonus features and is an unrivaled trilogy that stands the test of time making this a must-own for everyone’s movie library.  All three films are available on 4K Ultra HD as well as Blu-ray and DVD.

The huge horde of watchable extras makes this an essential film for the digital home library.

This immensely entertaining film has not only one of the cleverest titles and story structures but also showcases superior craftsmanship in all areas of production.  Seeing it in a pristine, ultra-high definition transfer only ads to the pleasure.  Especially if you are lucky enough to have big (80 “) home screen (QLED or OLED?).   This state of the art edition is as good as home video gets – even for a 35-year-old film.  Universal.