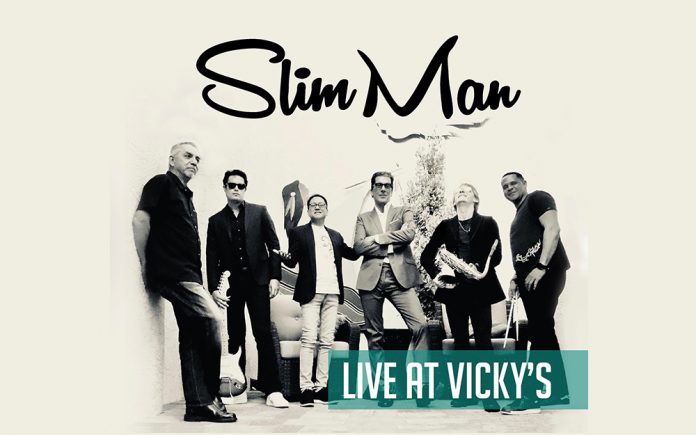 I love live jazz, it’s my favorite, and a close second is a live CD. I enjoy the energy you get from the audience and the musicians. It always beats a studio CD (at least in my opinion). So, when I heard that Slim Man, one of very favorites had recorded a CD at the last night of the season at Vicky’s of Santa Fe last year I was excited to hear it.

Slim spent the summer holed up in the recording studio while he mixed the tracks for 28 (that’s right 28) songs for his latest double CD entitled Slim Man LIVE at Vicky’s and the result is nothing short of amazing!

The mix is ‘The Best’ I have ever heard. It is crisp, it is definitive, its sets a new bar for what Live CD’s should and could be! It’s the new standard, so to speak. It is not just ‘live’ it’s Alive!! I know you’ll feel like you have the best seat in the house when you listen to it.

It’s his 13th Slim Man CD and he also has out another 4 Cds under his “Bona Fide” his funky/jazzy instrumental band. (His iconic hit ‘X-Ray Hip’ is still been played.)

His LIVE band includes keyboardist Tateng Katendig, who plays with the Slim Man Band and also performs with some of the biggest smooth jazz artists in the business. Craig Chesnut is an accomplished drummer who lays down the beat.

Local favorite Saxophonist Chase Huna starts out the CD and the show with the “Theme from Peter Gunn” belting it out as he performs. Nick Sosa on guitar adds some great sounds to the band while Slim Man plays bass. Percussionist Enrique Hernandez gives that great extra layer of sound that makes this simply divine music!

Slim Man on vocals (4 time winner of the CV Music Awards Best Jazz Vocalist) croons some of his best original music hits “A Thousand Miles Away,” “There for You,” “Angela” and “Can it get any Better?” He adds in a Bona Fide tune or two and mixes in a couple of smoking covers including “Take me to the River” and “Low Rider.”

It’s fun, it’s funky and you get the full Slim Man effect with every song! He had a Release party at Vicky’s last week to a packed house. Slim and his band play at Vicky’s on Wednesdays starting at 6. (They will be off the next 3 Wednesdays due to the holidays. They are located at 45-100 Club Dr. Indian Wells, Ca 92210.

The official release will be January 16, 2020. It will be available on iTunes, Pandora, Spotify, Amazon Music and everywhere else! People can buy the CD or the USB drive on the slimman.com website. The website has lots of info!

The next CD Release Party is Thursday, January 16, 2020 at San Juan Hills Resort, in San Juan Capistrano, CA. The full Slim Man Band will be there!

Slim Man is also producing another Rat Pack Show for the Spring. His last one at the Riviera was a great success. He’s holding the next on Sunday, March 29, 2020 at the beautiful Annenberg Theatre in Palm Springs. Slim will be performing classic “Rat Pack” songs with a full 17 piece Paul McDonald Band;  Sinatra, Dino, Nat and more. The acoustics and stage make the Annenberg Theatre in Palm Springs a perfect choice for the concert.

Slim Man will also be bringing his LIVE show to Spaghettini in Seal Beach, Ca. on Mother’s Day, Sunday May 10, 2020.

Spags is probably my favorite venue as it’s small intimate and you are close to the band. Tickets are reasonably priced.

Slim is working on his second cookbook which will be out in November of 2020. His last one featured amazing Italian dishes that are healthy, delicious, and quick and easy to make. Slim says he will be including lots of great recipes, videos and music with this one, so you won’t want to miss it.

For more information or to purchase the CD, or tickets to these events make sure to visit http://www.slimman.com