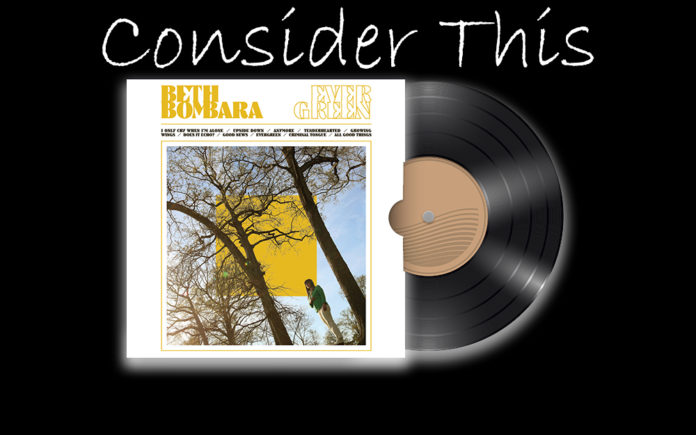 “I’m owning all my insecurities, call ‘em out by name and watch the demons bleed/They’re tryna hold me to the in-between, but oh no, I only cry when I’m alone.” That’s Beth Bombara cautiously spilling her guts on “I Only Cry When I’m Alone,”the opening track of her newest album, Evergreen.

Beth Bombara was born and raised in Grand Rapids, Michigan. She started taking piano lessons at age eight, and a few years later she jumped over to guitar. She managed to teach herself using her mom’s old guitar and book of chords. She also found time to learn trombone for the school band. By the time she was in high school, she had formed a Punk band called Green Means Go.

Green Means Go became local favorites, and cultivated a loyal following. The band continued to play shows even during Beth’s years of matriculation at Cornerstone University in Grand Rapids and Greenville College in Illinois. Halfway through school she attended a music program on Martha’s Vineyard, it was there she met her future husband and musical partner in crime, Kit Hamon.

Once she completed her education in 2006, she decided to pursue music full-time. Sometimes this meant playing in several bands simultaneously. It was during this era that she and Kit relocated to St. Louis, and she began to get serious about a solo career. An EP entitled Abandon Ship appeared in 2007. A couple of years later she reappeared as “Beth Bombara And The Robotic Foundation.” Darkly melodic, the style of her first full-length hewed closely to indie rock.

Over the next decade she fine-tuned her sound, incorporating Country, Folk, Blues and Rock, creating her own brand of Americana. She also adopted crowd-sourcing formats like Kickstarter to fund her albums. Wish I Were You arrived in 2010, followed three years later by the Raise Your Flag EP. 2015 saw the release of her self-titled Album, then Map & No Direction dropped at the end of 2017.

Taking a much-needed break following non-stop tours, Beth retreated to a cabin high in the Rockies. She hadn’t planned on writing anything, but she felt so invigorated by her surroundings, she surrendered to inspiration. The result is her new record, Evergreen,

The opening two tracks set the vibe for the entire record. On the aforementioned “I Only Cry When I’m Alone” sinewy guitar riffs rise up to meet Beth’s flinty contralto, over gnarled bass lines and a walloping beat. The assured melody and instrumentation create a sturdy façade to camouflage a real sense of self-doubt; “Feeling out of place, planning my escape, it ain’t the truth that sets you free, a perfect smile is all you need.”

Conversely, there’s an urgency to “Upside Down” that suggests the crisis of confidence has subsided; slashing power chords, roiling bass and a punishing beat mirror a romantic relationship that has hit a rough patch. But the sweet chorus strives to push past the hard times; “24 hours and we’re back around, same old story turn it upside down/Leave behind your could’ve-beens, and we’ll get going somewhere else.” Caustic guitar riffs on break signals rapprochement.

A couple of songs take Beth and her band out of their comfort zone, stretching back to the ‘70s for what Tenacious D. calls inspirado. “Good News” snaps, crackles and pops with a satisfying Southern Boogie crunch. Plinking electric piano orbits around rough-hewn rhythm guitar, tensile bass lines, and wobbly wah-wah riff-age. Opaque lyrics are either chastising a selfish ex, or taking aim at a certain KFC eatin’ Huckster-In-Chief; “Wasn’t it enough to feed your ego, without feeding my despair? Headlines read like fantasy, how did we get here?”

Reaching back even further, the title track summons the spectre of Phil Spector. “Evergreen” is a bit of a ‘60s pastiche blending Girl Group shimmer with some propulsive Jangle Pop and hints of Country Rock. Electric and acoustic riffs pour over descending bass lines, darting keys and a slipstitch rhythm. Lyrics draw strength from the resilient conifer, that is “always bending, never breaking.” Rubbery rhythm guitar intertwines with pliant lead riffs on the break, underscoring the song’s lithe feel.

The standout tracks here are “Does It Echo” and “Criminal Tongue.” The former is a bit of a Bluesy lament, recalling “Mystery To Me”- era Fleetwood Mac. Shivery guitar notes wash over gloomy organ colors, gossamer bass and a phased beat. This time, nature is used as a metaphor for a cratering relationship. The mood feels heavy, but hollowed-out as Beth reaches an impasse and briefly channels James Taylor; “Wanna believe in a better way, watch the fire turn to rain, someday the dam will break and wash it all, wash it all.” Tremulous organ and fiery guitar perform a Psychedelic pas de deux as the song shudders to a halt.

Icy keys “ooh-la-la-la” harmonies and careening guitars Crest over a clickity-clack rhythm on the latter. The sharp lyrics feel like a brittle indictment of the current political climate; “Our future for hire, selling pennies on the dollar, rinse and repeat, ‘til they believe/Scrub and never come clean, hope this is just a bad dream.” The song’s charged energy manages to reflect our fractious times.

The momentum slows for three numbers. “Growing Wings” is contemplative, powered by tippy-toe electric piano, high lonesome guitar and a rippling beat. Initially it displays a gritty gravitas that recalls the Rolling Stones’ “Dead Flowers” before it builds to a Beatlesque crescendo.

There’s an appealing back porch flavor to “Tenderhearted.” A languid encomium to a “tenderhearted lover” who’s a little “rough around the edges.” Bottleneck guitar and woozy harmonica underscore this weary admission; “It’s never gonna be perfect, but I’m still gonna try, the closest I’ll ever get is by your side.”

Meanwhile, “Anymore” amps the voltage, juxtaposing strummy acoustic filigrees with stinging electric riffs. This time a reckless inamorato gets the gate; “I didn’t choose your game, and I’m not gonna play anymore.” The album closes with the plaintive piano ballad “All Good Things.” Stripped-down keys are matched by scratchy percussion. The lyrics seem to be veiled tribute to President Obama and a blunt excoriation of the lemon meringue orange peel that took his place. The final verse manages to extract hope from the vice grip of graft; “So let’s start a revolution, let’s reach a new conclusion, make anything with beauty/Yeah, let’s sell it all, sell it all for free.”

Beth’s versatile touring band features her husband Kit on bass, background vocals, percussion and synthesizers, Samuel Gregg on electric guitar and background vocals and Mike Schurk on drums and percussion. Beth handles acoustic and electric guitars plus lead vocals. With the addition of their pal, John Calvin Abney on piano, organ and harmonica, they headed into the studio. Having honed these songs on the road, they had no problem setting up in one live room and banging the album out in less than a week. They even took care of production chores themselves.

With Evergreen Beth Bombara and company have added new colors to their sonic palette, without really sacrificing their signature sound. Her voice echoes the Bluesy grit of both Bonnies (Raitt and Bramlett), as well as Folkier antecedents like Natalie Merchant and Aimee Mann. This album does some heavy-lifting, but manages to feel effortless.