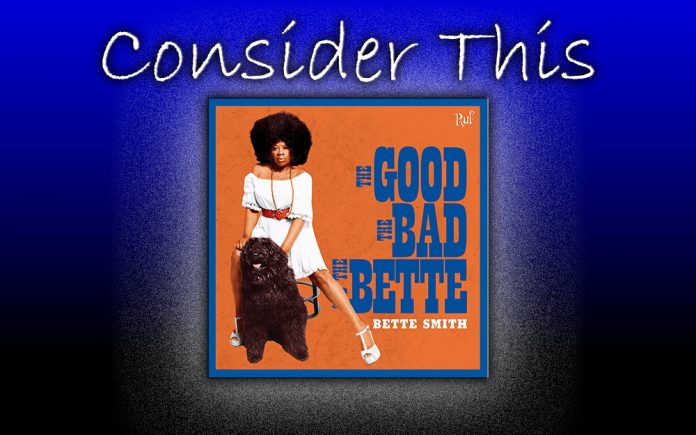 I am a sucker for a big fat ‘Fro, and in case you don’t know, I am abbreviating Afro, as only a true child of the ‘60s and ‘70s can. As a Hollywood kid, I spent my Saturday afternoons one of two places, in our swimming pool or in front of the TV digging “Soul Train.” Sorry, but “American Bandstand” was just too, um, bland, for this Olive American (what, Greeks don’t get their own color?), whose mother had been professional dancer for more than a decade before I arrived on the scene. The Black teenagers on “Soul Train” simply exuded cool, from the tops of their natural blow-outs, and groovy threads, to their fly platform shoes and mind-blowing dance moves. For me, the ‘Fro signified the epitome of cool-itude, even when a redheaded (white guy) named “Bernie” rocked one on the socially conscious comedy series, “Room 222.” So, when I saw the cover of Bette Smith’s latest album, with the singer sporting a righteous ‘Fro, I knew instinctively that the music contained therein was going to be as bitchin’ as the cover.

A native New Yorker, Ms. Smith grew up in the Bedford-Stuyvesant section of Brooklyn. Her parents were Trinidadian immigrants, her dad was a church choir director and her mother constantly listened to Gospel music at home. Inspired by the sounds of Mahalia Jackson, the Reverend James Cleveland, and South African singer Miriam Makeba, Bette began singing at age five, backed by a full church choir.

Her folks were strict with her, secular music was forbidden, Bette followed the rules. Ironically, her older brother Louis, wasn’t bound to the same restrictions. He had a clutch of Rock and Soul records stashed in his room. When the parents were out, he and Bette would dig in, finding inspiration with artists like Marvin Gaye, Aretha Franklin, Tina Turner, Michael Jackson, Otis Redding and even Elton John. Her parents had good reason to be over-protective. In those days, the Bed-Stuy neighborhood was pretty scary. Bette played her part, she was a good student who studied hard, got into college and later worked as a receptionist on Wall Street. She had always dreamed of a career in music, but she kept that to herself. It was only years later when her beloved brother was in the hospital dying that she confessed her ambitions. He encouraged her to follow her heart. He even suggested she start, by covering one of his favorite musicians, Bill Withers.

After he was gone, Bette got to work and hit the ground running. She began singing professionally wherever she could, weddings Bar Mitzvahs, funerals, block parties. She really paid her dues. She was sort of discovered playing a street festival when a friend of Jimbo Mathus (Squirrel Nut Zippers) caught her set. Not long after, she and Jimbo connected and he wound up producing her stunning debut, “Jetlagger.” Critics and fans alike took notice, and it felt like Bette’s arrival took a little sting out of Sharon Jones’ heartbreaking departure.

Now she’s back with her second effort, “The Good, The Bad And The Bette.” The record roars out of the speaks with the opening cut, “Fistful Of Dollars.” Despite sharing it’s title with the first of Sergio Leone’s seminal Spaghetti Western “Man With No Name” trilogy, the song sounds like the best Blaxploitation movie theme you’ve never heard. A powerful thwack kicks it all into gear, the crackling backbeat bookends muscular guitars, fluttery strings, buttery keys, throbby bass, and a punchy horn section. Finally, finally, Bette drops in to tell us what condition her condition is in; “Went by the bank, asked the man for a loan, he said your credit’s no good Bette, ain’t got no money to loan.” Sinewy guitar licks shadow her voice and she lays down the law, fiscal security is the ultimate aphrodisiac; “Love is just like money, it goes from hand to hand, romance without finance, that I just can’t understand.” On the break, honking sax notes and an urgent trumpet solo are matched by skronky guitar riffs. The arrangement powers down with a swoony, string-laden decrescendo.

For “JetLagger,” Bette contributed one original song, on this record, she’s written three. “Song For A Friend” shares a little musical DNA with Al Green’s “Tired Of Being Alone. Over slinky guitars, thumping bass lines and a kick-drum beat, she wraps her authoritative rasp around lyrics that fiercely champion a loyal friend who has fallen on hard times; “What’s that I hear you say, ‘all she ever did was take,’ you don’t know what I saw in her, but there’s a point I got to make/Since I didn’t see you ‘round when I felt so alone, she’s the one who was there for me, I couldn’t make it on my own.” Wooshy keys wash over the bridge and on the break, as sleek guitar riffs and supple organ runs execute a lissome pas de deux.

“Human” is powered by ricochet guitar riffs, sidewinder bass, ticklish keys and a taut, hi-hat rhythm. Playful lyrics offer a sweet encomium to her faithful dog, Jeremiah; “I know you’ve always been astray, running wild and free, but when you’re done running mister, turn from your fantasies/When your heart is in pain, whole world’s up in flames, Oooh, run to me, I wanna be your human.” Chunky, wah-wah guitar collides with a muted, Bowie-esque sax solo on the break as Bette and her Australian Labradooddle redefine the term unconditional love.

Finally, “Whistle Stop” deftly addresses her complicated relationship with her mom. Meandering bass lines connect with plangent guitar, cascading piano notes and a tick-tock beat. Sadly, she wasn’t there when her mother passed in Trinidad, so, Bette’s subconscious conjured up a cinematic farewell that took place on an old-timey passenger train. The melody’s languid torch and twang allows her to recall the good; “Thanks for coming to visit, I hope you find a peaceful rest, I’ll find the strength to forgive all of your last regrets,” and the bad; “Stop that train and see me again, stop these tears from the first time you went away/In your eyes there’s goodbye but you ain’t got nothing to say, a whistle stop, just to pass me by with a wave,” without judgement.

On a record stacked with superlative tracks the best songs manage to idle at that elusive intersection where Rock & Roll meets Soul. Take “I’m A Sinner,” which weds cross-cut guitar riffs, slingshot bass, a swooping horn section and stabby keys to a punishing big beat. Bette takes the blame with very little shame, and few fucks are given; “Yeah they called me Cain, yeah I killed my brother, yeah they set me to wander, yeah I bare the mark, yeah I know, I’m a sinner.” Like the devil on her shoulder, guitars slash and sting, as backing vocals echo one refrain; “Sinner!” The sludgey instrumentation slips into a sonic maelstrom before fading down to a single, reverb-drenched guitar note.

Gospel, grit and Glam-Rock confidently co-exist on Bette’s sly cover of the Dexateens’ “Pine Belt Blues.” Slower and more deliberate than the original, the chugging rhythm is augmented by Glitter-twang guitars, hopscotching bass, churchy keys and testifying back-up vocals. She only needs you to know one thing; “I was lost, but now I’m found.”

Meanwhile, both “Signs And Wonders” and “Everybody Needs Love” feature a couple of superstar assists from Luther Dickinson (best known as half of The North Mississippi Allstars with his brother Cody) and Patterson Hood (front-man for The Drive-By Truckers), respectively. The former is a Country-Gospel Soul gumbo whose main ingredients are Bette’s gritty gravitas, a Stax-ified horn section and Luther’s Stonesy guitar grooves. As guitars hug the melody’s hair-pin curves, her vocals slither through the intricate arrangement, sunny and sanctified one minute, growly and guttural the next. Lyrics paint a vivid portrait rife with ill omens and harbingers of doom, but Bette chooses to follow her instincts; “Signs and wonders all through the thunder, ah, and it strikes the earth and chars the grace and the flowers, he’s got my number, Oh, but look over yonder, I know the sun won’t set for many hours/Oh, but I see your face and I know it’s true, Jesus or my luck is going to see me through, and I got a revelation, saying providence is this, because I believe in you and me and not the signs and wonders.”

The latter offers an explicit homage to the power of love and strength of human connection. Blitzkrieg guitars blaze atop a potent melody as downstroke bass and a pounding beat hold down the bottom. Patterson Hood provides simpatico backing vocals but he wisely cedes the spotlight to Bette as she unpacks this revelation; “Ain’t nobody ever found happiness, living their lives alone, I used to believe I didn’t need nobody to be happy on my own/One sad day trouble found me, yeah, way down, oh I didn’t have no friends, along came the love of a real good man, he said ‘Bette, I’ll love you to the end’.”

The record closes with the cutting lament, “Don’t Skip Out On Me.” Landing somewhere between the ‘Stones “Wild Horses” and “Dark Side Of The Moon” era Pink Floyd, the arrangement and instrumentation adds new colors and textures to Bette’s sonic palette. Initially spare and bare bones, the track is anchored by sturdy bass and a rock steady beat, which allows enough breathing room to incorporate soaring, David Gilmour-esque guitar and a wistful trumpet solo. She may be nervous to go it alone, but she insists “I can carry my own weight.” It’s a trenchant end to a great album.

Production chores for “The Good, The Bad And The Bette” were handled by Drive-By Truckers Bassist/vocalist Matt Patton. He assembled a crack cadre of musicians which included Luther, Jody Nelson, Curtis J. Brewer and John McLeod on guitar, Eric Carlton on piano, Bronson Tew on guitar and drums, Jimbo Matthus on organ and guitar and Jamison Hollister on strings. In addition to playing organ, Henry Westmorland acted as a one-man horn section. Aside from his production duties, Matt added bass and guitar. Backing vocals were provided by Patterson Hood, Bronson Tew, Matt and Schaefer. Like “JetLagger,” this album was recorded and mixed at Dial Back Sound, Water Valley, Mississippi.

There’s an elasticity to Bette’s sound that transcends genres. Not unlike her heroes, Aretha, Tina and Otis, she isn’t afraid to inject a little Rock & Roll into her Soul. This is fat ‘Fro music. I don’t know about you, but it was just what I needed.