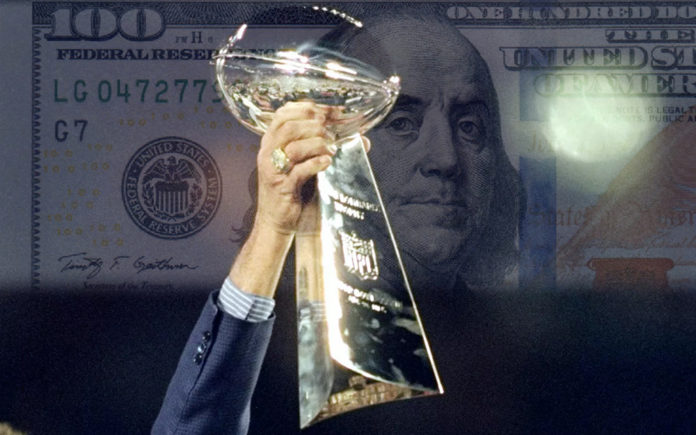 When it comes to Super Bowl teams, is there a formula they follow year-to-year? Is there some sort of tell that conference champions have that can tip off those looking for hidden value in the NFL futures odds?

As the playoff picture begins to get a little clearer, now seems like a good time to answer some of these questions and look at some potential Super Bowl futures plays. To do that, I’ll use data going back to 1990 when the league went to 12 playoff teams.

Let’s start with bye teams. Four of the 12 playoff teams get a bye and only eight are left when bye teams play their first game. If a bye offered no advantage, you’d expect about half of all Super Bowl teams to have had byes.

Of course, bye teams get home field (and tend to be better teams) so books have them significantly overrepresented – since 1990 every Super Bowl has featured at least one bye team, and 16 of the 28 have had two teams who skipped the first round. Interestingly, bye teams haven’t fared well once reaching the Super Bowl, going just 4-8 in the 12 games where they played a non-bye opponent.

As for record, we see that non-bye Super Bowl teams tend to be above average playoff teams – more wins really are better. Teams that make the Super Bowl without a bye have averaged 10.83 wins and only twice has a nine-win team made the Super Bowl.

Do teams that have outperformed ATS outperform in the postseason?

It would appear they do. Across the NFL, the average ATS mark is (obviously) 50 percent. Not surprisingly playoff teams tend to outperform during the regular season, with the average playoff team covering 57.5 percent during the year.

Super Bowl losers do slightly better than that at 58.6 percent, with winners an even more impressive 62.1 percent. What’s really interesting is that teams that have outperformed expectations in the regular season have on average continued that into the playoffs instead of regressing back to the mean.

Another clear result is that few teams make the playoffs with losing ATS records and those that do struggle once there. Since 1990, just five teams have ever made the Super Bowl with a sub-.500 ATS regular season record and only one – the 2012 Baltimore Ravens – have ever won it.

What about the Over/Under?

Maybe teams that score more points than expected (or have better defenses than expected) outperform? Playoff teams on average hit the Over a little extra at 50.4 percent. Super Bowl losers come in just over 55 percent with Super Bowl winners at 51.3 percent. Is there anything here? Hard to say for sure, but it is interesting to note that only around 36 percent of playoff teams and 30 percent of Super Bowl have played to the Under more than half the time in the regular season.

All told, the most important factors when trying to predict a Super Bowl winner tend to be getting a bye, having a good regular season ATS mark, and all else equal play to the Over a little extra. Unfortunately, bye teams come with much lower prices, so when looking for a good bet I’m more focused on ATS results – teams that are better than bookmakers are giving them credit for. I’m avoiding the Rams, Steelers and Texans, who all sit at or below .500 ATS. On to the bets…

I hesitate on this one due to the price, but the Chiefs check all the boxes. They’re very likely to get a first-round bye, with a 8-4-1 ATS mark and a league-leading 8-4-1 Over/Under heading into Week 15. Maybe it’s time for Andy Reid to win some playoff games?

The Bears are a near lock for the playoffs, sit 9-4 ATS and 8-5 O/U. Not only that but their defense just showed it’s capable of holding arguably the league’s best offense to six points. With all the major favorites showing some cracks, the Bears might just be set up for a run.

The Ravens seem to think it’s still the 1980s but have found a way to make it work in the pass-heavy NFL. They sit 7-6 ATS and will need a solid finish against the Bucs, Chargers and Browns to make the playoffs. If they do, they showed in Week 14 that their great defense and run-first attack can keep up with the league’s best teams.

Have a Safe, Happy New Year & as always G’Luck!