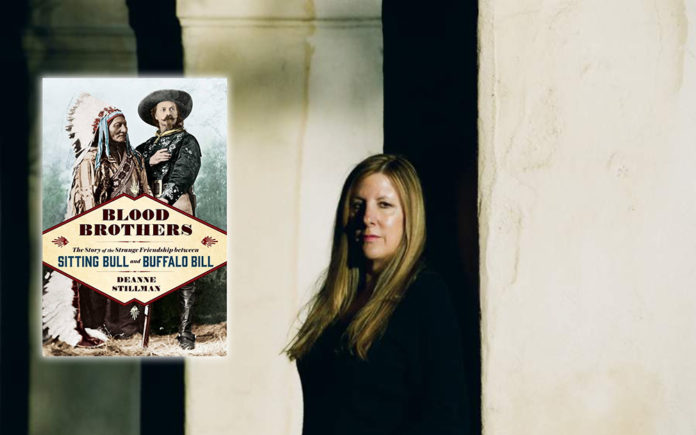 The American West carries a global mystique that is both majestic and notorious.  The United States is still a country that is growing, and maturing.  At only 241 years old, there are many things that need to be done, and fixed, regarding this nation’s past, present and future.  Deanne Stillman’s Blood Brothers: The Story of the Strange Friendship Between Sitting Bull and Buffalo Bill (Simons & Schuster, 286 pages) looks at two unlikely friends who made history and shaped legends.

For many, “Buffalo Bill’s Wild West” still lingers in memory.  We may not have seen the live reenactments, a spectacle that included a fantastic cast of real cowboys, Indians, trained horses and buffalo.  But, the tall character wearing leather fringe with curly locks of hair hanging beneath a wide brim hat, a waxed mustache and thick goatee seems to harbor somewhere in our American collective unconscious.

Stillman lays out the lives and times of two mythic men.

William F. Cody, Buffalo Bill, was in born 1846.  His family settled in the new territory of Kansas.  He was raised in the Great Plains, neighbors with Native Americans.  Cody grew up a frontiersman, resilient and capable.  As a boy, he could shoot, hunt and ride.  His father, an abolitionist, died when Cody was 11 years old.  Cody went to work, and by age 14, he was driving a wagon train, which when it was attacked by Indians, he killed the leader.

Cody served as a scout during the Civil War.  He earned his nickname while working for the railroad.  Cody hunted buffalo for food, selling it by the pound.  He provided four thousand pounds of meat, making $100 a day.

Sitting Bull was born Jumping Badger in 1831, South Dakota.   He was renamed for his bravery and wisdom.  He had excellent hunting and tracking skills.  Sitting Bull believed he was a “seer” in the womb.  He was made chief of the Lakota.  During the Indian Wars, he and his people escaped to Canada before making a deal with the US government.  Sitting Bull surrendered and was taken prisoner and forced onto a reservation.

Believing that peace was the only way for the Indian people to survive the white incursion, Sitting Bull called for a gathering of all tribes.  Sitting Bull sided with those tribes not willing to surrender.

At the same time, Gold had been discovered in the Black Hills.  In 1874, George Armstrong Custer headed out to meet with other regiments to capture or obliterate the “hostiles.”  Custer hoped to meet the great Sitting Bull, instead he found the Battle of Little Big Horn where he and his men were killed.

It is after this terrible battle that Buffalo Bill and Sitting Bull rise into “Wild West” mythic lore.  Cody swore to get revenge for his friend Custer and indeed takes an Indian scalp during another battle.  Sitting Bull was blamed for the massacre although he was not physically present.  Both men participated and saw the changing world ahead.

Buffalo Bill wanted to share the real Wild West with the rest of the world.  He created a show that traveled the country and abroad.  Annie Oakley joined the troupe and eventually Cody enticed Sitting Bull to participate on a tour.  The three became good friends, having more in common than one would ever expect.

Author Stillman does a beautiful job drafting the lives of these significant and colorful figures.  She writes with a compassion and neutrality that weaves a spell taking the reader back in time.  Research and hindsight give Stillman a voice that allows for insight and contemplation.  She carefully asks questions of history where the answers may have slipped away forever.

All the characters were a surprise to me.  I did not know how these lives crossed or how much of the story was fact or fable.  I had no idea of the extent of Buffalo Bill’s incredible show.   How nice it is to get lost in such an amazing period of our American history.

Stillman brings a new gravitas and a clearer picture of how this part of history played out in the Great Plains, which resonates today, considering the situation in Standing Rock regarding the pipeline crossing sacred Indian ground.

If we better understand our past, maybe there’s hope for the future?

The wisdom of Sitting Bull and Cody reverberates and I especially appreciated Stillman’s sensitivity to the animals – buffalo, horses, etc.  These creatures were important to all the players.  One lesson is how quickly extinction of a species can come about when at the time it seemed impossible.

Blood Brothers is more than a recounting of history and the making of legends, Stillman has rendered a wonderful story of our shared humanity and the unexpected power of forgiveness.