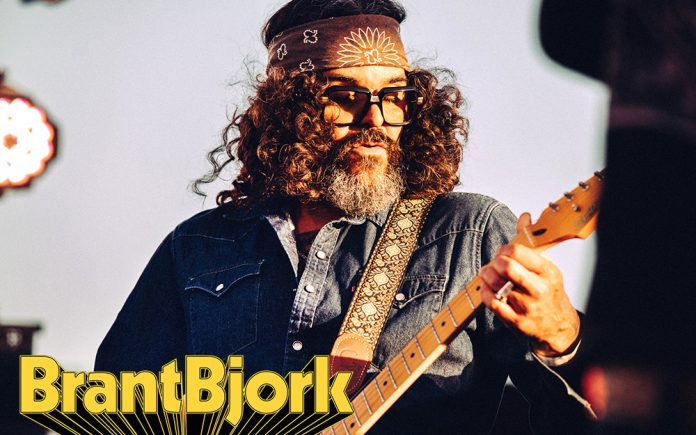 Brant Bjork is a longtime favorite in our desert music scene. He was a founding member of Kyuss and has been going strong ever since. When Bjork left Kyuss, he kept himself busy with De-Con, Fu Manchu, Che, Mondo Generator, and even a brief stint in Fatso Jetson. As if all of this wasn’t enough, he did all of this while starting a solo career.

Bjork started his solo career strong with the release of his first album, Jalamanta. For Bjork fans, Jalamanta is a staple. It’s an album that is brought up over and over amongst fans. It stands to reason that Bjork’s new label, Heavy Psych Sounds, would re-mix and re-master Jalamanta for its 20th anniversary. In fact, Heavy Psych Sounds re-released the entirety of Bjork’s back catalogue as well as releasing new music.

Last year’s Mankind Woman was Bjork’s first album of original work on Heavy Psych Sounds. Bjork brought desert legend Sean Wheeler along for the ride on this album; recording and touring. To follow Mankind Woman, the label decided to release a shelved jam recording Bjork did a decade ago, Jacoozzi, which marked the beginning of a year full of rarities.

Long out-of-print albums have been re-released, extensive touring, re-working Bjork’s solo debut, and a return home have all been on the table this year. On Saturday, November 2, Ruined Vibes, C.D.W.A., and Coachella Valley Weekly will proudly present Brant Bjork’s homecoming show at The Hood Bar and Pizza. This will be part of only 2 U.S. shows announced so far. Los Angeles duo [BIG]PIG and local favorites Brain Vat will be starting the night off. Doors at 8 and bands start at 8:30.

Coachella Valley Weekly: This is a homecoming show for you, do you have anything special planned?

CVW: For the past few years, Sean Wheeler was touring with you. It was a good fit since you were touring Mankind Woman and he was vocals on several songs. Have you found ways to work around the absence of Sean or was it time to cycle those songs out of the set list?

Bjork: “Sean and I put together a concept to have him guest on a handful of songs on a particular European tour that was about 3 weeks long. The result was so naturally cool that Wheeler continued to tour with us as a traveling guest for 3 years! It felt equally natural to incorporate his talent and our combined chemistry on our last record, Mankind Woman. Sean sang lead on a couple songs and backing vocals on a couple others. We played his 2 lead vocal tracks every night while we supported the record. Now that wonderful adventure is over. Out of respect we chose to keep the Wheeler songs in the “song-treasure-chest” until we unleash them again together. It’s healthy to move on to other songs and fresh ideas which is what we as a band have done.”

CVW: Heavy Psych Sounds is reissuing your complete back catalogue including an unreleased jam called “Jacoozzi.” Can you tell us a bit of history behind that?

Bjork: “Part of my enthusiasm to work with Heavy Psych Sounds was they’re intention to release all of my back catalog, not just new music. I found that to be very respectful and flattering. Heavy Psych Sounds also was intent on releasing my 2010 “shelved” recording, Jacoozzi. There was no hesitation on my part to agree to all. Jacoozzi was the result of a recording session in Joshua Tree in 2010 with Tony Mason. We rolled tape and I literally just made music on the spot. The result is uniquely organic and was equally necessary for my mindset at that time which was borderline burnout. After 9 years of being on the shelf, Jacoozzi finally got released. I had no intention of ever releasing it when I recorded it. The creative motivation was cathartic. It’s very cool to have something that wasn’t intended to fly, take off.”

CVW: Jalamanta, your first solo release, is the latest reissue and was remastered. Did you rework any of the songs or just remaster it? Did it hold up for you?

Bjork: “Of course Heavy Psych Sounds planned on re-releasing Jalamanta and they didn’t take long in doing so. Remastering it was my assumption until Heavy Psych Sounds said they wanted to re-mix it as well, for the sake of something totally fresh to coincide with the re-release. I was a bit hesitant but discussed the idea with Tony Mason, my long time engineer and together we concluded that nothing is sacred and it would be a fun challenge to re-mix it. And that was exactly what we experienced… a fun challenge. I think it sounds great. Is it better? That’s subjective and not the point. The point was to simply re-mix it. Tony and I have recorded records for the 20 years since we made Jalamanta. In that time we have come to know what can’t be improved within the record and what could. It was 90% a technical factor. I think we hit it out of the park and simultaneously confirmed it’s a timeless record.”

CVW: If memory serves correctly, you’ve always had at least one Jalamanta song in your set list, have you incorporated more into it?

Bjork: “Thereare about three songs from Jalamanta that have continuously been in and out of the live set for about 17 years. Some songs just don’t go away and some you play for a year only to never be played again. There is no telling what song will become a live staple. That’s part of the mysterious world of performing live music.”

CVW: Watching the video for “Chocolatize” shows how you work while writing an album. It also makes me think about you playing solo. Have you done any solo acoustic shows or have any planned?

Bjork: “I have just recently returned to doing solo-guitar shows and I plan to do more next year. I forgot how much I enjoy them.”

CVW: I’ve told you before, and I’ll stick to it. You, Dave Dinsmore, Bubba Dupree, and Ryan Gut are the tightest band I’ve seen you with. Every time I see you together, you get better. Has this allowed you to incorporate songs into your set list you never thought possible?

Bjork: “My current band, The Low Desert Punk Band, has been together for about 6 years now. We’ve come a long way. We worked very hard together and the work payed off. My personal goal as a bandleader is to get to a place where the band chemistry is so tight we can allow ourselves to be loose. We have achieved this. The song selection was and has always been based on striving for that tight/loose chemistry. It’s a bit self-indulgent, but I don’t care. My fans know I’m on a trip and they learned years ago they’re gonna go with me or stay at home.

“Thanks to all those who choose to come along. They’re support means so much. It’s like Investing in an exploration. I’m very grateful for all the people who support my music and this band.  We do our best to show our appreciation by creating and performing the best music that we are naturally inspired to produce.”