Brant Bjork is synonymous with desert rock.  He has been a part of almost all of the most well-known bands coming out of the desert scene in the late 80’s until the early 2000’s.  He initially made his name as a drummer in such bands as Kyuss and De-Con, but is an accomplished guitarist and singer as well.  Although Bjork was part of many successful bands, he knew his roots and was humble enough to play for many lesser known local bands including playing in the band which gave Mike Pygmie his name, Melodious Pygmies.  Mike was a 15 year old kid at the time!

Through the years, Bjork has played in Fu Manchu, LAB (post BL’AST! Band), Fatso Jetson, and Nick Oliveri’s Mondo Generator.  In 1999 he released his first solo LP, Jalamanta.  On Jalamanta, Bjork was the solo musician on the entire album.  After releasing Che’s Sounds of Liberation, Bjork went on to record his second solo album, Brant Bjork & The Operators.  He would go on to release a total of 12 solo albums.  Between solo albums, he’s kept himself touring non-stop.

In 2015 Bjork solidified the tightest line-up he has ever worked with.  (This opinion could be argued, but you’d be hard pressed to find somebody who’s seen this line-up live, disagree.)  Bjork is joined live by long-time collaborator Dave Dinsmore on bass, D.C. Hardcore band Void’s guitarist Bubba Dupree, and Ryan Gut on drums.  This line up is so tight, Bjork released a live album Europe ’16.  Europe ’16 also featured desert legend Sean Wheeler who joined Bjork’s live band on tour in 2016 to lend his vocal talents to Bjork’s songs to perfectly round them out. 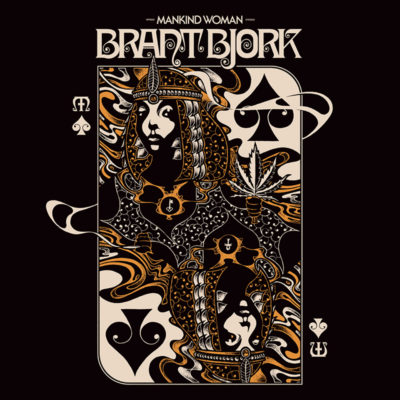 After the reaction of the fans, Bjork realized Wheeler needed to be a bigger part of his band.  Bjork alongside the producing talents of Dupree recorded Mankind Woman featuring Wheeler on vocals on a few songs.  Mankind Woman is a masterpiece.  It is the epitome of stoner rock.  It was recorded in 29 Palms and definitely has that desert feel.  Mankind Woman was released on September 14 through Heavy Psych Sounds.  Bjork will be playing a couple local shows before heading out on a European tour.  He will be joined by Nebula at Pappy and Harriet’s on Friday, October 12.

Coachella Valley Weekly:  When you left the valley, who did you end up playing with?

Brant Bjork: “As far as popular bands, Fu-Manchu.  I moved up to Humboldt County and moved back and started playing in Mike Pygmie’s band (Melodious Pygmies).  It’s funny because those kids were like 14 and they needed a drummer.  I figured, ‘yeah man, I’ll jam with some kids.’  It was fun.  Then I started playing with De-Con.  Then I went up to Santa Cruz and started playing guitar in LAB.  It was the guys from BL’AST!.  I was in Santa Cruz for a little bit then came back down and played in Fatso Jetson.  I also started playing with Jesse (Hughes).  We had a duo called The Blackless Heroes.  We called it ‘jazz sabbath.’  He played bass and I played guitar.  We would do a 40 minute set of a Sabbath medley.  Our friend Matt Pizano had a motor home with a generator.  We drove to Ozzfest in San Bernardino with the intent of playing the parking lot.  We pulled up next to a dude with a flatbed truck and ended up playing on the flat bed.  We had like 100 people show up.  Then I went back to full-time touring with Fu-Manchu.”

CVW:  So Jalamanta was your first solo album.

Bjork:  “Yeah.  That was my first real solo adventure.  I was living with Dave Dinsmore.  We were painting houses in La Quinta.  One day I looked at Dave and said, ‘I’m done dude.  I’m quitting and I’m gonna make a record.’  I was so frustrated musically and needed to do something I wanted.  I borrowed a 4 track and rehearsed the record for 2 weeks.  I booked 5 days at Rancho De la Luna with Fred Drake, and laid all the tracks down.  That was it.  It was hard.  I cashed in my chips and made it happen.  I ate shit for a lot of years.”

CVW:  You did make it happen though.  You and Sean (Wheeler) are true desert wizards.

Bjork: “I think that’s why he and I connect so much.  Being a wizard is not being afraid to fail and making it happen.  That’s why I like the 60’s.  Like Jimi Hendrix.  That dude was a wizard.  He went for it and made it happen.  Hendrix changed the way people made furniture, let alone play guitar.  He was an artist.  He made people think abstractly.  That was a long way of saying Wheeler and I connect.  Him and I will listen to old reggae and just space out on these dudes drunk on Red Stripe.  The first time I saw Wheeler, I went to see DI at Adrian’s.  Nick (Oliveri) and I connected there.  Sean Wheelers band Zezo Zece Zaddfrac and the Dune Buggy Attack Battalion came out.  He had long hair and mirrored shades.  I saw that, and I was like, ‘punk rock is dead to me.’  I instantly loved it.  I barely remember DI.”

CVW:  When this iteration of the band came together, did you know this was the right group of guys?

Bjork:  “This band came together like all great bands.  Meaning, it just came together.  A little push, a little pull, a little luck… the stars aligned.  Dave showed up at my door and was like, ‘I’m joining your new band.’ It started with Tony Tornay and I hanging out and deciding we wanted to play.  I had a rhythm section and decided I didn’t want to do what I normally did.  I wanted to get a second guitarist.  Zaina (Bjork’s wife) asked who I would want.  I said Bubba Dupree.  Zaina said, ‘call him.’  Zaina knew somebody who got ahold of him.  Within 20 minutes, I was talking to him on the phone.  We don’t get to play too often because we all live in different places.  But when we do, it’s awesome.”

CVW:  Was everybody on this record?

Bjork: “This time around, we couldn’t.  It was a time thing.  It was Bubba and me.  We kinda liked it that way.  I got to get the drum vibe off Bubba’s guitar.  We haven’t played any of these songs live yet.  At the end of the month, we will be rehearsing and getting everything solid.  It’s gonna be a fun time.”

CVW:  Lastly, you’re going to be on another album coming out this year.  You played drums on a couple of Aussie’s albums.  Full Tone Generator with Brad Young and Andy Fernando.  How did that come about?

Bjork:  “Andy was our tour assistant in Australia.  He has a band called Don Fernando.  We hit it off.  He text me saying he had some songs he wanted to record which didn’t really fit into Don Fernando and asked if I would play drums.  I let him know we had a studio in the desert at my wife’s house.  I told him we should record there.  He was like, ‘fuck yeah!’  We took his songs to another level organically.”