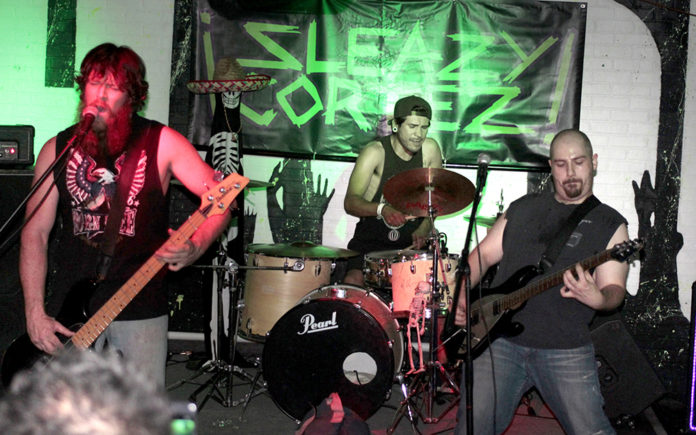 Sleazy Cortez has been killing it here in the valley the last couple years. One of the most popular bands in the desert, they were nominated for a couple CV Music Awards and performed at the VIP afterparty, they won a preliminary round of the CV Music Showcase and competed in the Finals, they are also in high demand to play on the hot ticket lineups and festivals like the upcoming Stickyfest, all while keeping it Sleazy.

Now the boys are set to release their new video for “Mountain Man” this Friday at The Hood Bar & Pizza. Sleazy Cortez is: Nick Hales on guitar/vocals, Derek Wade Timmons on bass/vocals, and Damian Garcia on drums.

Hales took time to answer a few questions for us.

CVW: Please share about any EPs or CDs that you’ve recorded.

Nick Hales: “Trailer Trash Blues, our first LP was recorded in Room 9 studios, Jerry Whiting is the man! Nothing but great things to say about him! We also recorded our 6 1/2 minute Piss Drunk Punk EP there two years later. Itching to get back into the studio with Damian Beats early 2019, for we have not recorded with him just quite yet!”

CVW:  Tell us about your new video you have coming out?

Hales: “A rockin tune with a great storyline, “Mountain Man”! This is actually our second attempt at making a decent music video. Definitely think we pulled it off this time, but only because of the help and support of everyone involved. Shoutout to Lex Lucker who is an overall amazing human being.”

CVW: Who filmed it?

Hales: “Edgar Barajas and Ayrton Carrazco. Awesome dudes that helped with the vision of the video that “Mountain Man” became. We actually had enough footage to make a ten minute video because of all the great ideas everyone came up with, but alas, the song is not even 4 minutes long!”

CVW: Who came up with the concept?

Hales: “Derek, Indiana circa 2006, (or so he tells me!) the storyline is all in the song, so the ‘script’ for the video was practically written already.”

CVW: I know you said Brian ‘Puke’ Parnell from Throw the Goat had a lot of input please share about that?

Hales: “Being that he knew the song already, we were stoked about all the locations he had in mind when we told him about the video. He also helped with props such as the hatchet and shotgun. Smokin’ and jokin’ with that dude was half of the fun though. Parnell tells EPIC stories!”

Hales: “For myself, the CV Showcase was kind of a big deal. It really helped us get our merch and exposure to a lot of people in the music scene, especially from being in such an on-and-off-again band like Sleazy is. And the Halloween Havoc KCLB show this last year was damn near the most fun show I’ve ever played.”

Hales: “Derek will have lyrics/riffs/general song concept, I usually spill my sauce on it and then Damian comes in with the grooves and accentuation and it really ties it all together.”

Hales: “The last half of “Beat Up Your Mom” off of the Piss Drunk EP and definitely the last part of “Mountain Man,” the most metal sounding riff of sleazy to date! That one was off the top of my head at practice one day and it stuck.”

Hales: “Actually, a lot of them. “Mountain Man” for sure, “Mississippi Poser” cause it’s funky as hell, “Beat Up Your Mom” is just epic for me.”

Hales: “It’s been a lifelong dream to play the outside stage at Pappy and Harriet’s. Schmidy’s was one of my favorites. The Wiltern in LA would be a wet dream come true.”

Hales: “Probably this video, filming it, watching it, I will always remember how fun it was making it.”

Hales: “To have no day job, to ride comfortably on music endeavors alone, but unfortunately I’m a realist.”

Hales: “Pretty much anything I listen to rubs off onto me in some certain way. Hendrix and Eddie Kramer were a dynamic duo, SRV of course, Finn Ryan, Chris Kosnic and Ed Mundell from The Atomic Bitchwax.”

CVW: What local bands are you listening to right now?

Hales: “Anyone and everyone I can. As for any who’ve recorded: Dalis Llama, Sunday Funeral, FrankEatsTheFloor, Instigator, Throw The Goat, You Know Who, Brain Vat, just to scratch the surface.”

Hales: “I hear Dave Catching is in charge of Rancho De La Luna these days. That’d be cool.”

Hales: “Monster Magnet, The Melvin’s, Clutch, Fu Manchu, Sleep, Om, High On Fire, Weedeater, mostly bands we get and that would probably get us and like us and be awesome and pound a cheap beer or two with us!”

CVW: If you could meet, interview and hang out with only ONE musician who would it be and why?

Hales: “Alice Cooper, the king of shock rock!!! He’s brought exposure to a lot of great musicians over the years. I miss him being on the local radio station. I don’t play golf, but for him, I would learn.”

Hales: “It’s a blessing and a curse, anybody can access your music, but VERY few people buy music anymore, what with globalization of music and such.”

CVW: How do you feel the CV Music scene has changed over the last 10 years?

Hales: “I am floored with all the new bands and good musicians that have popped up over the last decade! I see a new band every other weekend it seems, and more than you would expect are actually really good!”

CVW: If you could change one thing about the local music scene what would it be?

Hales: “The fact that venues/bars keep skimming on quality of service for bands. A lot of times when you play a show, not only will you not get a drink or food for providing entertainment, but some places will even short you on pay. Why? Because they can. An oversupply of bands, with an under supply of venues. Usually, the way around that is charging a cover, but bar owners don’t wanna do it, even though nearly half of their clientele are musicians or music lovers that wouldn’t mind paying that cover anyway.”

Hales: “PIZZA FOR THE WIN… but ice cream though.”

CVW: Where can we find your music?

Saturday October 27th at CV Brewery in 1000 palms w/Mega Sun for some rock and brews!!

Saturday Nov. 10 “Stickyfest” at The Palms on Amboy Road. It’s an all-day outside show with a badass stage.