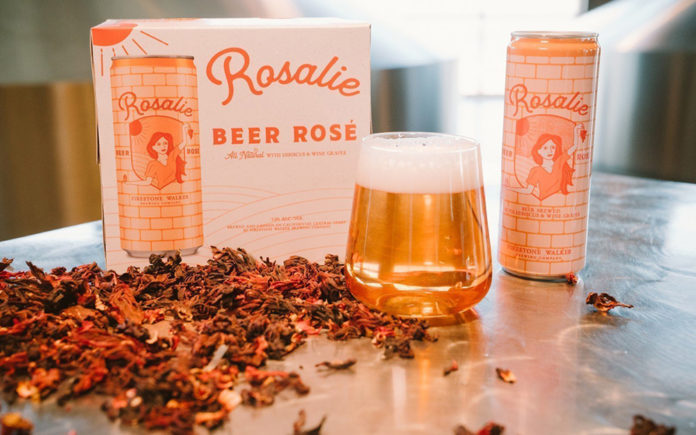 In a sector flooded with gimmicky marketing, shameless adjuncts (bull testicle beer and fried chicken beer are both things that no one asked for, yet here they are), attention-seeking names, and flavors that sound great on paper but just don’t work in execution, it’s hard to come up with a truly original idea that just makes sense. Beer/wine hybrids have been around the block for some time now (literally thousands of years) but have always been a very niche product without hype. Breweries like Dogfish Head and New Belgium created beers fermented with wine must (must is unfermented wine juice) years ago, but it’s Paso Robles Firestone Walker Brewing Co that has taken the style from the top shelves of bodegas and is putting it in your local grocery store with their latest offering, Rosalie Beer Rosé.

Paso Robles is a scenic town located just off California’s Central Coast, known for its mineral hot springs, abundance of wineries, and for beer lovers, Firestone Walker Brewing Co. Revered by craft aficionados for their barrel aged stouts, the veteran brewery upped their profile considerably with the 2012 release of their mainstream hit, 805 Blonde Ale. A massive success that converted many macro drinkers to craft, 805 showed that Firestone had the ability to create a drink that appealed to a wider audience than just bearded hipsters, and they’re looking to do it again with their latest release, Rosalie, a beer brewed with wine grapes and hibiscus flower. 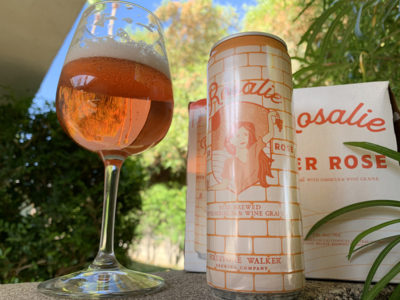 According to official Firestone Walker press releases, Rosalie is made predominantly with Chardonnay grapes, with Viognier, Sauvignon Blanc, Riesling, Muscat Canelli and Orange Muscat grapes added for complexity. Hibiscus flowers are added late in the boiling process and give the beer its distinct rose coloring. Although released back in January of this year, this is a beer much more suited for warm weather drinking, and it finally piqued my curiosity enough to give it a try. I enlisted my friend and veteran Brewtality taster (she was a commentator for my personal favorite installment of this column, entitled, “Desert Musicians Drink Bud Orange and Hate Me,” available online at coachellavalleyweekly.com) Jacqueline Bonine to sample and describe what’s going on in this beer.

APPEARANCE: “This looks like an energy drink,” says Jacqui as she peers suspiciously at the tall, cylindrical can. I agree that It totally looks like an energy drink. For chicks. Jacqui nods at me, “This is something that a soccer mom with a ponytail and a stroller could get away with drinking in a park full of children.” The can says, “beer brewed with hibiscus and wine grapes,” and features an image of a woman holding hops in one hand, and grapes in the other. The beer pours a rose gold color, the same color as the font of the can, with brilliant clarity and a quickly dissipating head of foam. 4/5

NOSE: So confusing. This totally smells like someone make a kamikaze style drink with a pilsner and some white wine, which shouldn’t be confusing at all since that’s exactly what this product is, yet here we are. Slightly confounded. Pleasant graininess, perfume-like floral notes, apples, pears, softly herbal hops. Not gonna lie, I really like it. My brain just has to accept that it’s all going on at the same time. 4/5

TASTE: Jacqui is as confounded by the taste as I am by the nose. “I don’t know what that is; this flavor,” she blinks after her first sip, “It’s not bad.” The taste is just as confounding as the nose, with the hibiscus flavor being very forward, giving a tart astringency reminiscent of tea. Production notes from Firestone Walker say that this beer has been subtly soured to add acidic overtones and brighten the palate, but I simply cannot find what they were going for. This tastes like hibiscus tea beer, no matter how many sips I take. As the beer warms, the vinous, fruity character of the wine comes out, but the apple and pear note still sits secondary behind the dominance of hibiscus flower. 3/5

MOUTHFEEL: Mouth drying. Very astringent. Medium bodied and highly carbonated, it’s got more in common with a strong kombucha than any beer or wine I’ve ever had. 3/5

OVERALL: “This is a drink I would buy for my SUV driving soccer moms, I stand by that,” asserts Jacqui, “This has ‘day drinking’ written all over it.” This is definitely a beer that can appeal to rosé drinkers, with its complex-yet-inoffensive profile that takes some getting used to. I popped a second can open the day after the initial tasting and I was just as confounded by the flavor. I honestly don’t know how I feel about this product. It’s intelligently packaged, beautifully made and much more complex than Firestone Walkers mainstream breakout product, 805 Blonde Ale. Maybe too complex to gather the same kind of popularity?