Rahm’s 20-foot birdie on the fourth playoff hole proved the difference in Palm Springs, where he entered as the highest-ranked player in the field and supported that status with his stout play. 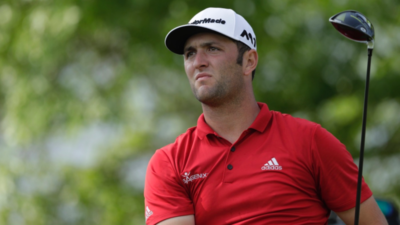 Rahm barely took his foot off the gas, both across the difficult closing stretch at PGA West and during the playoff when he sent one approach after the next hurtling toward the pin. It’s the fourth worldwide win in less than a year for Rahm, who continues to outpace even the rosiest of projections for his burgeoning career.

The win moves Rahm past Jordan Spieth to world No. 2, making him the fourth-youngest player to ever reach such heights.

One year ago, the Spaniard was ranked 137th in the world. His win at the Farmers Insurance Open the following week altered his trajectory, and he now finds himself only one rung away from the top of the ladder.

While so much focus has been (deservedly) heaped upon players like Jordan Spieth and Justin Thomas, perhaps it’s Rahm who has the best chance to eventually unseat world No. 1 Dustin Johnson. He’ll have a chance to chip into that deficit this week as he defends his title at Torrey Pines.

A for Effort: Andrew Landry. Landry put up a stellar fight in Palm Springs, holing a birdie putt on the 72nd hole to force a playoff and going shot-for-shot with Rahm for nearly an hour. He came up short in his effort to win for the first time, but Landry certainly has plenty of positive takeaways from his week in the desert.

Unusually Short Stay: Phil Mickelson. Lefty has become a regular in Palm Springs, but three shaky rounds left him with his first missed cut in this event since 1994 – a few months before Rahm was born.

Brady vs. Back Up…

The matchup for the Super Bowl is set: the New England Patriots will take on the Philadelphia Eagles for the Lombardi Trophy.

Philadelphia dominated the Minnesota Vikings in the NFC Championship, and it wasn’t even close. The Eagles won it, 38-7. Minnesota drove down the field to score on the opening drive of the game, but after a Case Keenum interception gave the Eagles their first points of the game, they didn’t look back.

In the AFC Championship, the Jacksonville Jaguars got out to a decent lead over the New England Patriots, and then proceeded to play it safe, which ultimately cost them. They stopped trying to score points, even kneeling with 50 seconds to go in the first half — the first time any team has done that all season.

Tom Brady and the Patriots, of course, came back and scored multiple times in the fourth quarter to take the lead. The Jaguars didn’t have enough time to respond properly, and put together one of the saddest offensive drives. They lost, and it was ugly.

Personally, I’m extremely uninterested in this Super Bowl matchup. The Patriots are boring and the Eagles are definitely not going to beat them, Nick Foles transforming into a beast notwithstanding. Another Patriots Super Bowl win seems very likely at this point.

But … it’s the Super Bowl, and we’re about to have a startling lack of football in our lives. I’m sure I’ll watch the same as most of you, and I’ll be rooting for the Eagles.