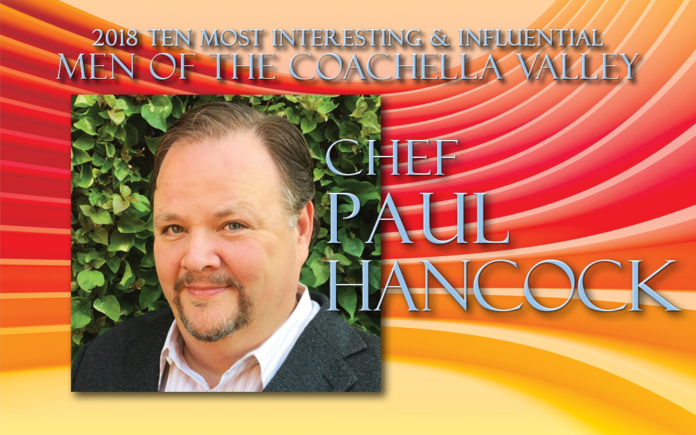 Executive Chef Paul Hancock brings his culinary prowess to the Miramonte Resort & Spa in Indian Wells, showcasing a marvel of creative fare inspired by his travels and love of food.

Standing on a chair in his grandmother’s kitchen when he only 4, Hancock already had an attraction for the magic of the culinary arts. He loved to watch his grandmother, mother and aunts, turn ingredients into heavenly aromas and was transfixed by the process. Hancock was born and raised on Harker Island, North Carolina along with 3 sisters and a brother, which he is very close to. The children were brought up with strong values which they have carried through adulthood. Although he came from a family of fisherman and boat builders (and apart from his love of sailing) his heart has always been in the kitchen. He attended East Carteret High School, and later East Carolina University, NCSU, and did an apprenticeship in France, under the guidance of Chef Marc Veyrat, at Auberge de l’Eridan (which held 3 Michelin Stars at the time). But before his college days, he got his first job in the restaurant industry as a busboy at Beaufort House Restaurant. Hancock was determined to learn everything about food and beverage and immersed himself in it, even working for free at times just to get the experience and learn different techniques. There were times when he found himself paying high library fines for cook books that he had held past their due date. At the age of 18, Hancock began to travel, with the desire to learn different culinary methods from different countries such as Spain, France, Greece, Italy, Ukraine, Guatemala and the Caribbean.

Although there was a time when he was studying Finance in college, he always felt most comfortable in the kitchen and it was his refuge where he was able to flex his creativity. It was while working in a restaurant during a summer break when the chef at the establishment told him that maybe he should seriously give the vocation a try, “That stuck with me and months later I was in full-time…it sort of chose me,” said Hancock.

Hancock is inspired by what he does, and it energizes his zest for life. He has an insatiable appetite to keep going and improving, “I enjoy being able to give and provide for others, and I am able to do that by creating dishes and feeding people,” says Hancock. He has been recognized for his for his culinary expertise as one of the Best Chefs in America from 2014 to 2018, received the Trip Advisors Certificate of Excellence, and most recently won Palm Springs Life’s Best of the Best campaign for Best Sunday Brunch, and Best Breakfast in Indian Wells.

Down time for Hancock means spending time with friends and indulging in his hobbies which include, stamp and currency collecting and physical activities incorporating sports, namely sailing, hiking, tennis and baseball. He also meditates, gets massages and is well versed in the benefits of a soak in a Jacuzzi.

Hancock has an endless list of movies that he enjoys such as, The Aviator, Field of Dreams and Anchorman. On the smaller screen, he’s a fan of Chef’s Table, Dexter, Archer, Homeland, The Big Bang Theory and Seinfeld. His love of music is vast, gravitating to bands that include, CCR, Imagine Dragons, Put de Mayo, Celentano, Renaud, The National, and Alan Jackson just to scratch the surface. For his favorite page turner, his preference is La Methode, Le Technique, by Jacques Pepin.

When it comes time for Hancock to take off for a vacation, he revels in a long list of stunning spots around the world that include, St. Barts, July in St. Tropez at Club Cinq Au Cinq, the Amalfi Coast, the Dijon region of France, Phuket, Bangkok, Chiang Mai-Thailand, Tulum- Mexico, beautiful places in the U.S such as the Florida Keys and sailing in San Diego.

The best way that Hancock finds to keep his progressive life together involves forward motion, but appreciating taking a step back, “Take yourself out of the equation and see if what you’re doing makes an impact. Sometimes you need to change a slight direction and then there are times to make a radical change,” he says. He also prays, and reads as much as possible, and does his best to keep up on many topics. He also follows his mantra of, “This is not a dress rehearsal, do or do not, don’t just try.” 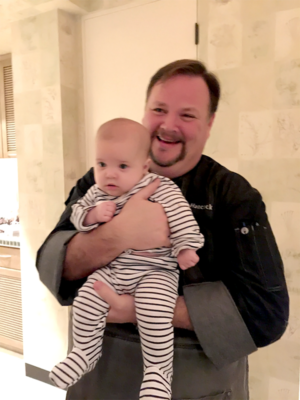 The people that Hancock respects the most include his mother, “She taught me so many life lessons at a very young age,” he says. He also is impressed by football player JJ Watt, as a humanitarian, competitor and for being as Hancock puts it, “A darn right good guy.”

The charity that Hancock is connected to is Find Food Bank, which is a non-profit organization  serving eastern Riverside as well as southern San Bernardino Counties. They work with community-based partners who run programs such as soup-kitchens, food pantries, senior programs and more, distributing over 10 million pounds of food assistance annually, aiding to nourish 85,000 people a month.

Chef Paul Hancock finds joy in creating innovative dishes and seeing the smiles on the faces of those that enjoy his culinary vision. With his love for all things delicious, he will continue to help keep the Coachella Valley as a hub for phenomenal fare.

Chef Paul Hancock be representing the American Find Food Bank as his intended charity at the Top Men’s & Women’s Fundraising Charity Event on May 24th at Hotel Zozo in Palm Springs.